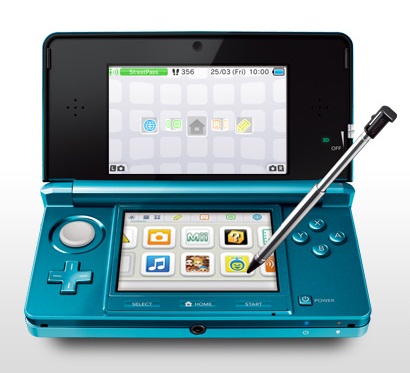 The Nintendo 3DS is an interesting console. From a company that does like to release improvements and iterations of their handhelds fairly frequently, it is very easy – and it would not be beyond the possibility of this being the current public perception – to see the 3DS as just another upgrade along similar lines to the DSi and XL models released over the last few years.

But the 3DS is, in fact, an entirely new console. Yes, it has a few tricks up its sleeve and more than its fair share of features that may at first glance seem like gimmicks – but it’s certainly worth taking a closer look at the device to see just what it offers the average gamer. If you buy one, you can expect to find the console and charge base unit, a set of augmented reality cards and a 2GB SD card included – as a very generous bonus and very likely necessary once the upcoming Virtual Console and downloadable content updates make their appearance.

The machine itself is about the same size as a DSi, but the top screen – the one with the 3D capabilities – is a little shorter and wider, while the touch screen remains largely unchanged. Meanwhile the layout has had a shuffle with the Start and Select buttons being moved to underneath the touch screen a lot like the context sensitive buttons on a smartphone. In addition, these have been joined by a new ‘Home’ button which if playing a 3DS game, will take you to the main menu while suspending your game – a very welcome little feature which allows you to make notes, check notifications and friends lists during a game.

Finally, the d-pad on the left has been joined by the fantastic addition of a thumbpad. Allowing analogue control on a Ninty handheld for the first time, the stick itself is comfortable to use and responsive though it sometimes can be a bit pernickety using it for older DS games (due to the obvious limitations of the software being made for the consoles not having a thumbstick). Still the d-pad is still there as an option and I dare say that games made specifically for the 3DS will make for a heck of a more natural fit for the stick itself.

But before you even get your hands on any new games, the 3DS comes packed with some very neat software built in. Returning from the DSi are new, slightly improved versions of the Sound and Camera apps with new features to take advantage of the 3DS’ new features. Most obvious is the 3D capability, with 3D visualisations while playing music and the ability to take 3D pictures with the two outer cameras on the unit. A very welcome addition to the Sound program means it now accepts mp3s as a file format (something almost bafflingly exempt from the DSi version of the app) and using the new Streetpass functionality – which we’ll come onto in a moment – you can share track lists, charts and even songs between players. Miis make an appearance on the console, with a dedicated Mii Maker app, and the Streetpass Mii Plaza – two applications that make excellent use of one of the 3DS’ most stand out features. Basically what this means is that as long as the console is at least in sleep mode (turned on, but the cover closed) the console can transfer data between other consoles in the Streetpass or over a wireless internet connection in Spotpass with no need for any input from the user. Of course, this needs setting up prior on a per game basis but it’s very quick and takes seconds to do – and only has to be done once. If a game has Spot and/or Streetpass features, you don’t even have to have the game in the console to benefit: for example Street Fighter 4 3DS will allow you to transfer collectable statues this way, and Mii Plaza offering puzzle pieces to collect, and a turn based ‘RPG-Lite’ game of sorts to encourage you to meet others.Even if this isn’t possible, the built in pedometer allows you to collect coins which can then be spent in these or indeed any titles that support the coins, which at the time of writing is most of them.

Probably most impressive are the two augmented reality games. Face Raiders and AR Games. The former allows you to take pictures of friends’ faces before they come to life in the room you’re in (using the camera) and then tasks you with shooting them down over several stages and bonus levels. Nintendo have certainly made this particular console have a focus on sharing, as you’re encouraged to show off this feature and collect more faces to unlock new levels which is a brilliant way of encouraging a more social side to play.

The AR Games themselves involve a pack of cards that come with the console. Once lined up in the camera, you can take pictures with your favourite Nintendo mascots, or partake in a spot of fishing on your desk or perhaps some shooting targets on your bedroom floor. The most impressive thing about these games is how much there is in each of them – yes, they’re mainly for showing off and they’re not something you’re going to be playing for ages, but whenever someone new wants to see your console, they will be the first things you’ll show off, and will be cooed over for a fair while.

But should you buy one yet? At the end of the day, the potential of this new console is going to come down to the games. It’s very – very early days yet, and I can’t help but feel that this very weak launch for a console. It’s interesting to note that the best selling game so far worldwide for the 3DS is the newest Professor Layton game, which we won’t see over here for a while, sadly. If Nintendo can buck their ideas up in terms of getting more software over here sharpish, and the titles are produced with the high quality that Nintendo’s own stuff is usually known for, and then Nintendo will have another huge hit on their hands. However, I don’t think they can – nor should they – rely on the 3D as the console’s major selling point as the main reason to shift consoles, especially at the prices they’re asking for. Hopefully we won’t have to wait too long to see more and better games than the current launch line-up appear on the shelves.