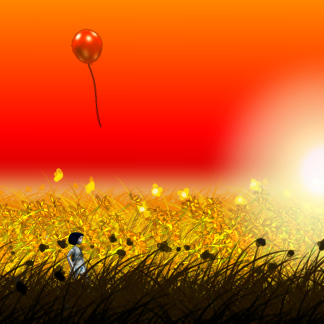 Now that horror as a genre has got over its brief and bizarre obsession with little poorly-shampooed girls as antagonistic little terrors, we can all get back to feeling concerned for their welfare. The opening FMV of Lylian: Episode One – Paranoid Friendship pulls no punches on that front, depicting the titular and blank-eyed heroine writhing on the floor trying to roll towards her frankensteined teddy bear, Bob, who is then snatched away by a particularly spooky looking orderly. It’s all very melodramatic and manipulative, but even despite the dated CGI, you certainly start taking notice.

In the exposition that follows (and enemies of the written word need not apply because there’s plenty of text) we learn that Lylian is an unloved little girl obsessed with doughnuts and unable to keep the world of her mental state from leaking into reality. In gameplay, this manifests itself in your powers, the first of which allows you to transform the dingy halls of Hacklaster mental hospital into a golden meadow.

Considering the theme (and knowing the leanings of the typical Indie title), I was actually expecting Lylian to be a 2D platformer, when it’s more of side-scrolling beat em up (Lylian uses her straightjacket sleeves as whips). That said, with all combat restricted to a single plane, the game actually has less dimensionality than the likes of Golden Axe. Lylian’s mental powers potentially go some way to making this aspect of the game more interesting, but one wonders if endless spacebar pressing would get old outside the confines of the demo. There is however, plenty of dialogue to split the action up, and you just know there’s going to be puzzles in there somewhere.

If the gameplay is going to be someting of an aquired taste, that’s doubly true of the artwork. Indie titles often put aesthetic at the core of the proposition they’re selling. From the way that Lylian seems to have a somewhat cohesive look to it, I’m guessing there was some concious thought in that direction. Sadly, the dated rendering and modelling tools behind the graphics will scare quite a few away. Whilst trying to remain constructive, ‘very ugly’ is a phrase I would use if asked to be brutally honest, and the way that the playing area takes up only 1/3rd of the vertical space of the screen for much of the demo is rather perplexing.

Still, these things don’t entirely obscure the game’s personality, and whilst my mind isn’t yet made up regarding the quality and consistency of the writing, it has a dark sense of humour to it and I am at least intrigued as to how the story could develop. If you feel the same sting of interest after you’ve checked out the demo, perhaps there’s something greater to be found as the game progresses.

Lylian: Episode One – Paranoid Friendship is out now on PC via multiple download services. You can purhase the game or sample the demo here via IndieDB’s Desura client.