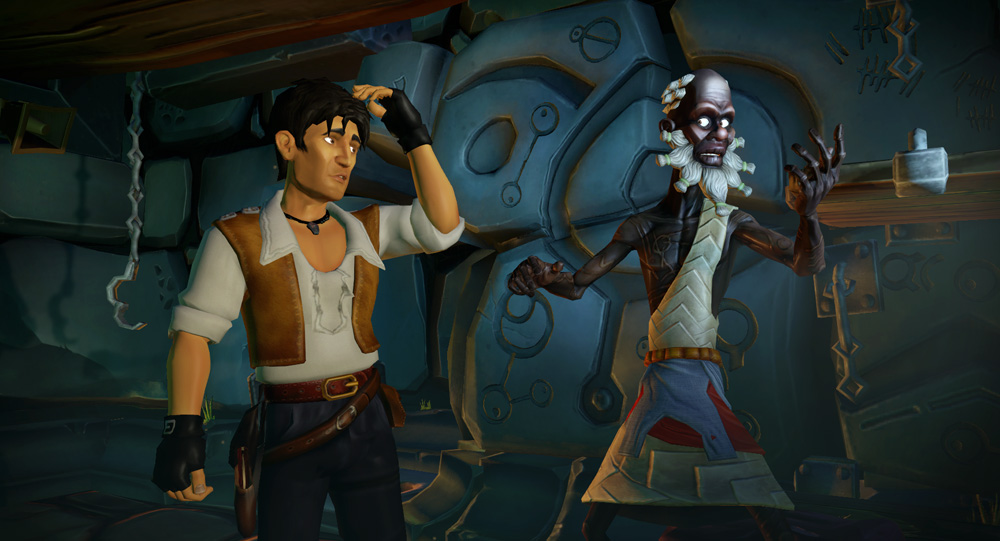 Now I know how Amanda feels.

This is a very difficult review to write; there’s a part of me that wants to just write this game off as a bad’un. It has many serious flaws, but there are also glimpses of pure genius throughout that have me holding back, just.

So let’s walk our way through it, and see where we end up at the end.

The beginning of the game is possibly one of the most frustrating I’ve encountered in a long time. You’re unceremoniously dropped into the first encounter after a very brief introduction where a letter, read by Amanda, the second main character (or third depending on your decisions later) and sidekick to Jack, attempts to set the scene. This sets your expectations at a fairly mediocre level. Everything functions well, it’s even well animated in places, but you’re given little to no explanation to what you have to do, how, and what effect each action should, or will have. Luckily Amanda is a reasonably interesting character to follow; she seems smart, driven and lands just on the right side of cliché and well…. if it wasn’t for the plunging neckline and the rest, she’d be an example of how to do a female character well. Jack however I took an almost immediate dislike too, which is problematic given the fact he’s the main protagonist. This isn’t helped by his set of levels generally being the less interesting parts of the game. The prison sequence at the beginning actually made me stop playing on a few occasions. The design appears lazy, with puzzles that are convoluted even for an adventure game and you spend an inordinate amount of time running up and down the same flight of stairs, and don’t even get me started on the fighting. Why they decided to make it a repeated focal point for each section is absolutely beyond me. They’re not fun, interesting or even fun (wait did I say fun already?).

Torture comes in the form of the repeated ‘dream sections’ where you’re in Jacks head. I’m not entirely sure what the designers were thinking of at this point, but it takes abstract to the absurd. A few areas maintain a degree of logic, but mostly they are areas to endure and get through as quickly as possible- rather than gaming sections to enjoy. Ironically, the best sections of the game are those that don’t actually involve Jack. Amanda, and later on, Eve have significantly more character than Jack, and even have some nice, if not predictable, interplay. Arguably though, the best character by far, is the cook.

It isn’t however, all bad. There are some sections that show a considerable amount of love. There are incidental details hidden (almost always in plain sight) throughout the game that bring nothing to the actual experience itself, other than a clever nod or an appreciative wink to some part of gaming, or cinematic culture. The street fighter-inspired control ‘tablet’ in the fighting ring and the many many film references serve as good examples for this.

There is also a very clever optional ending about two thirds of the game in, where through a very organic set of circumstances you can end the game completely. I won’t spoil the how or why of this part, but it shows a degree of trust in the player that is quite refreshing, while also being a clever nod towards the driving motivations of the main character and the player themselves. They get extra brownie points by allowing you to almost immediately reverse the decision and carry on playing too. I was genuinely impressed.

There too are other little moments in the game design, not so much the game itself, that impress and you can tell a great deal of effort has gone into it- but there are numerous technical issues, some minor- character placement or in-engine quirks, others; the more technical, are game breaking. There are repeated sections where you can’t hear the conversation in a cut-scene due to the music. There are several instances where conversations are being triggered too early or are left running into cut-scenes, all of which can leave you missing large chunks of vital plot. There are also camera issues aplenty- it can be very difficult sometimes, especially in confined spaces, to get the camera just where you want it. On the more technical side there are shading issues, graphical and texture pop-out, numerous CTD’s and an unfortunately game breaking bug two thirds of the game through where a cut-scene triggers a black loading screen that is not passable by any means, which is unfortunately where this Verdict ends.

There’s hardship, long sections of slog with little to no reward interspaced with occasional glimpses of genius, wonder and joy. Unfortunately, as with many adventures, it all ends too abruptly by something that is ultimately out of your, and the game’s control.

It’s a constant battle between the good and the bad aspects in this game and often it ends up being two steps forward, three steps back. As such, I find it very difficult to recommend this game and that’s even before I take into account the game breaking technical issues I experienced on my rig. A quick Google shows that my issues are not rare.

So, If you’re after a real adventure, I would skip Jack Keane 2 and go install Monkey Island instead, there are just too many issues for me to recommend the game.