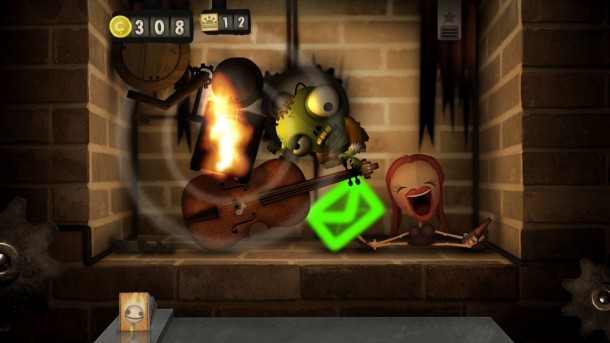 Little Inferno is a game about a fireplace. It’s about the simple act of burning things. At a surface level it’s a fairly simple puzzle game. Yet Little Inferno also manages to be one of the most thought-provoking, satirical and engaging games of the year.

In a town under siege from snowy weather and dropping temperatures you sit facing a fireplace, with nothing but a letter. All you can do is throw it in the hearth and set it alight. From its ashes money springs forth that you can then spend on buying new items. Yet all you can do when you get these new items is set them alight. With every item burnt more items become available to buy.

There is a strange joy to be had with watching each item burn. Every one of them acts differently when in the fire — corn bursts into popcorn, credit cards explode into wads of cash and toys scream in agony. There are certain combinations that act differently when you combine them together, and this is where the real puzzle element of the game comes into play.

The gameplay in Little Inferno is fundamentally about words. To help you find correct combinations you have a list of the combination names. Some are self-explanatory such as the Wooden Blocks combo, which requires you to burn wooden blocks together, whereas some are more obscure, like the Cold War combo which I mistakenly assumed would be the combination of dry ice and a nuke before working out the correct solution.

Though working out these word puzzles becomes strangely compelling that’s not what makes Little Inferno exceptional. It’s the wonderfully paced narrative and dark tone that does. At first it appears that there is no real story to the game, but as you start to get to grips with the game’s mechanics you start receiving letters. These letters — from your next door neighbour, the weatherman and the head of the in-game Tomorrow Corporation who made your fireplace — begin to build up a sense of the world outside of your house. As your pyromania grows the letters become more and more revealing and without ever taking your eyes off the fireplace you get a vision of the world beyond your view.

As well as these letters a lot of the narrative and the game’s themes are delivered through the game’s mechanics themselves. It’s easy to see Little Inferno‘s constant burning and re-buying of items as a satire of both consumerism and of cheap game mechanics used to make video games addictive. The satire of consumerism is further compounded when you realise the catalogue menu, where you use the in-game money to buy new items, is the only place in the game that has upbeat music and bright colours.

Despite only using a few words, together the gameplay and the story combine beautifully to deliver a narrative more engaging than games that have hours of cutscenes. In fact, few games manage to make allusions to Plato’s Allegory of the Cave, make the player question their actions and use their mechanics as a metaphor so effectively as Little Inferno does.

The game is not without its faults though. With every item bought there is a delivery period to wait before it arrives, which can range from ten seconds to nearly ten minutes depending on the item. This makes the later part of the game more frustrating than it should be, as you’re forced to wait lengthy periods of times to test out new combinations. You can skip the delivery time by using coupons that sometimes appear from items and combinations, but these are often too scarce to be useful.

Sometimes, it’s also not apparent whether or not you’ve actually burnt two items together. On a few occasions I was left stuck wondering how to complete a combination after the game failed to note the two items were on fire. This could be a real problem on the more obtuse combinations, but fortunately it only happened on a couple of occasions through the game. Although, it’s a possibility that this is only an issue on the Wii U version of the game, which I was playing.

Little Inferno does little to utilise the new functions of the Wii U, mainly only using the touchscreen of the gamepad to drag and drop items into the fire. There are some other little instances, such as the camera item that uses the camera in the gamepad to take a polaroid of you as it burns. The game can be played entirely on the gamepad if you wish, or you can play on the TV with a Wii Remote. Either way the game will be displayed on both screens, so if you like you can display the game as an interactive fireplace on the TV while playing on the gamepad in a different room.

Even with its minor faults, Little Inferno is a real gem of a game. Its simplicity in gameplay and complexity in narrative makes it truly extraordinary. Quite simply, regardless of whether it’s on PC or Wii U, it’s a game that needs to be experienced.

Review based on copy supplied by Tomorrow Corporation. Please read this post for more on our scoring policy.