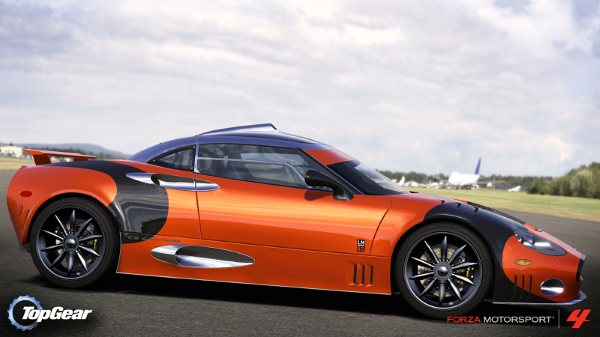 Kevin McLennan is looking forward to the upcoming launch of Forza 4 on the 360 in October, knowing this, we asked him to put together some words about it. As if by magic, they appear after the jump.

Forza 4 is the upcoming fourthquel from developers Turn 10 and I think it looks set to take the title for the most realistic and in depth racing simulator to date, a title which will offer some real competition to PS3 exclusive Gran Turismo.

The level of detail in each new Forza game is astounding, each new titles builds exponentially on what we saw in the previous entry in the series. Massive amounts of car customizations are available from paint jobs to engine and tyre upgrades, Turn 10 have also added around 15 new manufacturers bringing the total up to 80. New racing types have been added such as auto-cross and multi heat races and improved 16 player online racing modes will give you and your friends increased options for multiplayer.

A new feature known as Autovista allows you to inspect all aspects of the car, inside and out, finding out information and available upgrades. The interiors of the cars have been given a big graphical upgrade and you will now be able to view them in full screen. One thing which always got to me in Forza 3 was being awarded a random car when you won a race, this concept is getting a shake up for Forza 4 where you will be able to choose which car you want from a list of three. This has to be one of my favourite new features as it felt like the cars were forced upon me and I would often get rid of the ones I didn’t need or which were duplicates. With more choice comes more individuality and more challenge.

The inclusion of Kinect in Xbox games these days is a hot topic with many gamers giving it the evil eye and it’s no less the case here. When using Kinect in a race the game takes control of acceleration and breaking for you, leaving only steering. Hardcore Forza fans are not going to like this addition as it takes a lot of control away from the game. However Forza has been known as a serious racing simulator and this should open up the game for arcade and casual gamers to get something out of the series. Kinect will also track your head movements, looking to either side of the screen will move the view to your mirrors allowing you to see who is closing in on you and voice recognition will also available to navigate menus and start races.

It’s an interesting inclusion to the Forza series, but for me Kinect lacks what an actual controller can give you which is total control of the game. Microsoft will be releasing a wireless wheel around the time the new games comes out, so if you’re not a Kinect gamer like myself then I think this will be something worth looking at.

As with Forza 3 Top Gear are getting content in the game but this time on a much bigger scale. In the spotlight will be the much loved Top Gear test track for you to trial your new cars and tuning setups on along with occasional series item “Car Football”. Jeremy Clarkson will be voicing the narration during the Autovista feature which will be within the Top Gear studio set.

Impressively Turn 10 plan to keep Forza 4 updated on a monthly basis. Adding new content this often will surely make this the biggest and most in depth racing simulator to date with a long, long lifespan.

3 thoughts on “Looking forward to Forza 4”