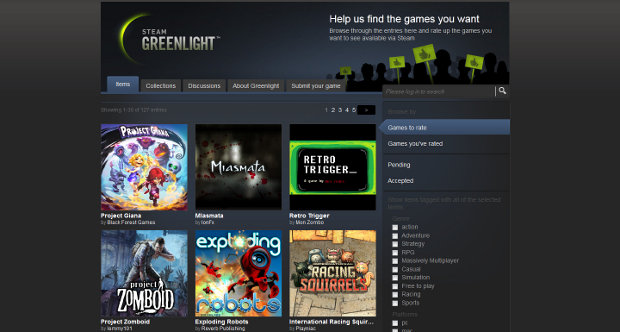 Since its release last Thursday, Steam’s Greenlight service has seen over 700 submissions to its database of potential Steam games. Whilst many indie developers have been quick to praise Valve’s new user-driven service, there have been some concerns over quality control. For every potentially interesting indie game there were dozens of crudely made, unfinished projects, joke entries and requests for AAA games unlikely to ever be added to Steam’s catalogue.

Last night, Valve rolled out an update to the service, making several changes to the layout in an affect to improve the service. Their most controversial move, however, was the introduction of a $100 entry fee.

100% of the application fee goes directly to Child’s Play, signalling that Valve’s motive in this move is not profit driven.  The hope is to make sure only actual games are added to the Greenlight service, reducing the unnecessary “noise,” as Valve puts it. Existing Greenlight entries will not be charged the new entrance fee, but all new submissions going forward will be charged to appear on the service.

Reactions to  the move have been polarising. A quick Twitter poll this morning met with responses from both sides of the scale:

@thereticule I think it’s great. 100$ is a modest fee, goes to charity, and it keeps out people who aren’t serious about their game.

@thereticule bad. Apple its a fee per dev, this is a fee to put your game in a massively flawed voting system! Which might not go anywhere!

@thereticule As a university student developer on financial crunch, I still like the fee. It weeds out projects that aren’t truly dedicated.

Will the new barrier to entry price some interesting new start-ups out of the service, or will it merely succeed in keeping the dregs out? Only time will tell. But whilst Greenlight is still far from perfect, Valve are at least demonstrating a willingness to adapt and showing a commitment to their new platform. We’ll be keeping a close eye over the next few weeks to see what happens.

What do you think?