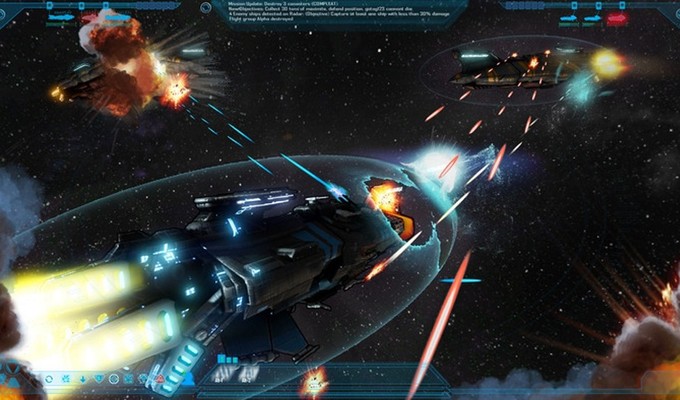 I try not to get excited by Kickstarter projects, I really do. So often they promise the stars, encouraging us to throw piles of money at often unproven developers in the hope that one day their ethereal promises will flourish into something wonderful. But other times I just can’t cope – I watch the videos, read the descriptions and then sulk because I’m probably not going to be able to play the game for at least a year.

Several days ago The Mandate passed its Kickstarter goal after a rather tense fund-raising campaign that at times looked like it wasn’t going to succeed. But it did, and I’m glad, very glad that it did, because this is one of those projects that after reading their proposal it’s very difficult to do anything other than say ‘yes, one of those, please.’

Citing their inspirations as including science-fiction classics such as Battlestar Galactica and Firefly, The Mandate is attempting to answer the dream of so many people by finally giving them the chance to command a starship and crew amidst the stars.

Yes, I admit, we’ve been to space many times before and often been placed in command of massive ships with powerful weapons, but The Mandate is promising that your crew will be more than just a number; each crewman will have their own name and position, so you will really feel the loss after accidentally venting them into space to put out a fire. As a captain in the Grand Fleet it’ll be up to you whether you run a tight, by-the-book ship with strict rules, regulations and shiny badges, or instead extend dress-down Fridays to last the whole week and drink beer on the bridge in your underpants.

Ship customization looks like a simple affair that will give a multitude of tactical options. Hulls are modular, so you can choose between many configurations and hardware set-ups – I’ve always been a fan of the ‘loads of guns’ approach personally, but if you’re after stealth or speed you can always reconfigure to suit. Finally, once your vessel is fully operational, you’ll be able to finish the job with a custom paint-job and a few shiny stickers before heading out into the stars.

There’s a lot more details over at The Mandate’s website, describing the team’s overall plans for the project. If they achieve even half of what they’re planning it looks like we could be in for an excellent game, and it’s certainly one I’ll be keeping a very close eye on.

But perhaps I’m kidding myself, perhaps there’s no way this team can possibly finish their ambitious plans and bring me the game I’ve always wanted. Perhaps they’ll just fade away and never deliver what I’m hoping they can.

But perhaps they will.