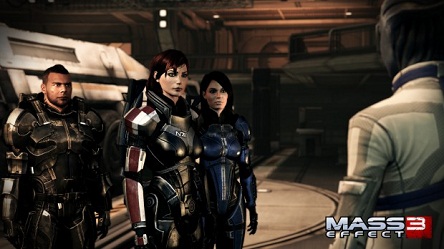 So, it’s Mass Effect 3 release week. Stick around for a team-wide first impressions article this weekend, with Kevin’s review to follow sometime later. But for now, here’s a little pre-release rage.

Generally of course, the Reticule is against the asynchronous release of game titles in a digital age. As Rock Paper Shotgun’s No Oceans campaign put it nearly a year ago, the traditional “Tuesday in America, Friday in Europe” release pattern makes no sense. In fact, it’s directly contrary to many publishing houses’ stated goals, especially Piracy. I can download Mass Effect 3 right at this moment, so long as I’m fine with torrenting it, since not even Origin is offering it up to us Europeans. Of course, since I’m a responsible, morally upright person (who just happens to be employed as an internet spam monkey), I’m doing the responsible thing and complaining loudly rather than punching EA’s revenues square in the face like they’re a snotty-nosed Citadel journalist.

Oh yes, I should just learn a little patience and I’ll be playing the game soon enough anyway, even though I have to dodge spoilers like I have to duck and cover when my fellow content writing monkeys get a little unruly. But I must persevere.

But wait a damned minute. Why the hell should I?

The story behind the Friday game releasing tradition is caught up in the whims of the high-street, or their distribution channels or something. I can’t actually find an authoritative source that doesn’t put it down to “tradition”, in fact (as sure a sign as any that it is a practice that is intrinsically bullshit). But all this doesn’t really matter since, if you’ve been keeping an eye on gaming news at all in the past fortnight, one of Europe’s biggest games retailers (and the UK’s only nationwide high street retailer) cannot even afford to stock the game. Why is the entire industry indulging this antiquated sector when the material evidence that it is no longer a critical element of a title’s success is stacking itself so high?

It’s becoming clear that the publishers simply don’t care about forcing a change in this bizarre practice. Perhaps there’s some voodoo marketing benefit from opening yourself up to three days of piracy, who knows. But then, the really perplexing thing is why online retailers didn’t go ahead and jump the gun.

Seriously, Amazon, Play, Gamestop, theHut, whoever. What are you doing? What were EA going to do to you if you broke a “street-date” that was based around the ridiculous idea that anyone would be buying this game on an actual street? You know, I don’t think EA would have cared if you had started selling Mass Effect 3 “early”, considering that GAME aren’t selling the damned thing at all. Mass Effect 3 was the perfect chance to break rank, to put the high-street in its place, to force a change the will benefit everybody. Let’s hope you get another chance.

4 thoughts on “Why Is My Mass Effect 3 Still In Amazon’s Warehouse?”