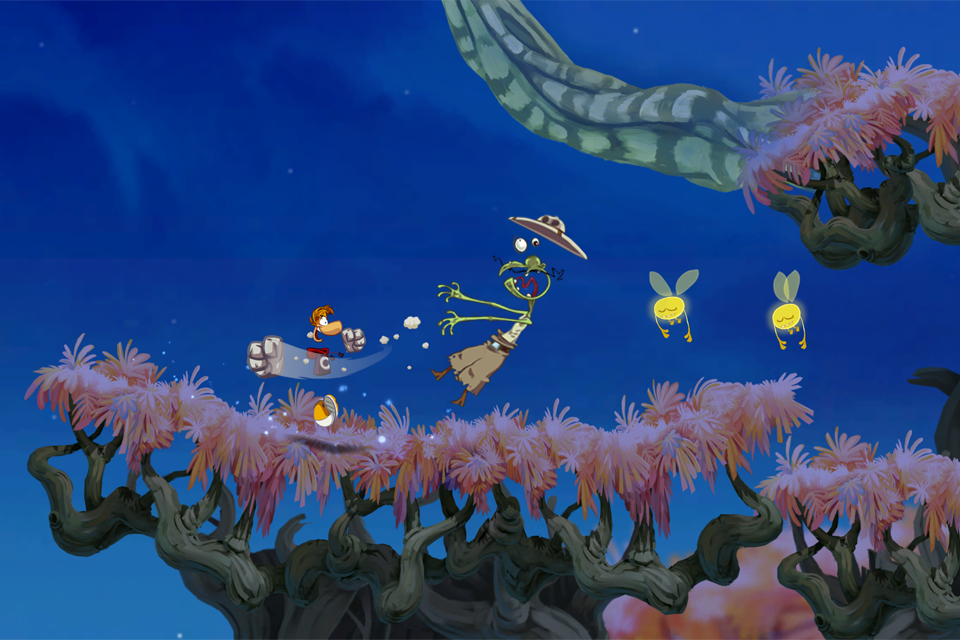 As I start to delve deeper into the Android store on my tablet, I will be looking to do more mini Verdicts of small lightweight mobile games and full scale Verdicts on the more in-depth titles. After the break you will find two mini Verdicts of free-to-play title Temple Run 2 and Ubisoft’s £1.99 title Rayman Jungle Run. I’ve tended to be wary of free games on the Android store in the past unless it has been recommended to me by someone else, and after seeing a positive reaction on Twitter I downloaded Temple Run 2 to see what it was all about. What it is about is having fun and running away from a monster. You run out of a black caver with a hulking beast fast behind and you have to run as far as you can without being caught by the monster or getting caught out by one of the environmental trap.

You swipe up to jump onto ropes or over obstacles, down to duck under fallen trees and left or right to turn corners. You can also tilt your mobile device to lean to collect coins or stay on the tracks when you reach the mine cart section. It is fast paced and very addictive, you can unlock different characters with the coins you earn, each of which has different special abilities which provide you with various bonuses. The sheer simplicity of the game and ability to Tweet your score from in-game keep you enthralled, and it is free-to-play, but you can buy extra coins if you so wish to let you buy new characters without earning them. Simple great fun.

Verdict – Headshot
Available on Android and iOS. Reviewed on Nexus 7. Any game which has the same visual style as Rayman Origins is going to be worth playing, even if only to gaze lovingly and the gorgeous levels. But beyond the lovely design it is a great little game, and well worth the tiny amount Ubisoft are asking for it. The game is split into five groups of levels, each of which focus on a particular skill, be it jumping, hovering, wall climbing, punching or a mixture of them all.

The basic goal of each level is just to get to the end using the various skills you have unlocked, but along the way you will want to collect the lovely Lums that litter every level. If you collect all the Lums on a level you earn a tooth for the guardian of the undead. Collect five teeth and he will let you access bonus levels for each world. Everything looks just like it does on the console cousins of the game, and that is what really makes Jungle Run stand out, it marries a great artistic style with really fun gameplay. A must buy.

Verdict – Headshot
Available on Android and iOS. Reviewed on Nexus 7.

Both titles were purchased via the Google Play store.