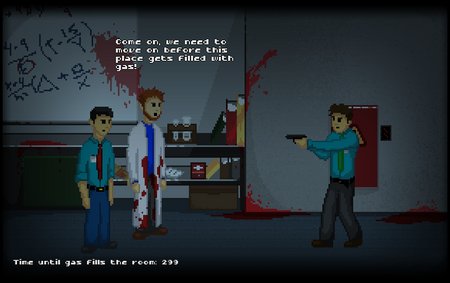 I’m not sure whether or not I made the right decision, but it was a decision I had to make. With the room steadily filling with gas and just one round left in my pistol, I rose my gun, took careful aim, and fired.

Trapped in a room rapidly filling with toxic fumes, your only escape lies through two other people. The only problem is one of them might be a shape-shifter. Maybe both of them are? Perhaps all three of you are? Maybe it’s the gun itself, could it be the gun? I swear, the gun just moved. With the timer ticking away an astonishingly brief countdown until your death, you have just one task to ensure your survival: kill the shapeshifter.

But how do you pick? With less than three minutes available, you’ve only time for a couple of questions. Who do you ask? What do you ask them? Choose quickly and choose wisely, because the responses they give are the only method you have of determining the shape-shifter. Listen to the words of your companions, watch their body language and if they slip up just once, take the shot, kill the shifter and survive.

I watched, I listened, and with less than ten seconds remaining on the clock I made my decision and fired.

But what if I was wrong?