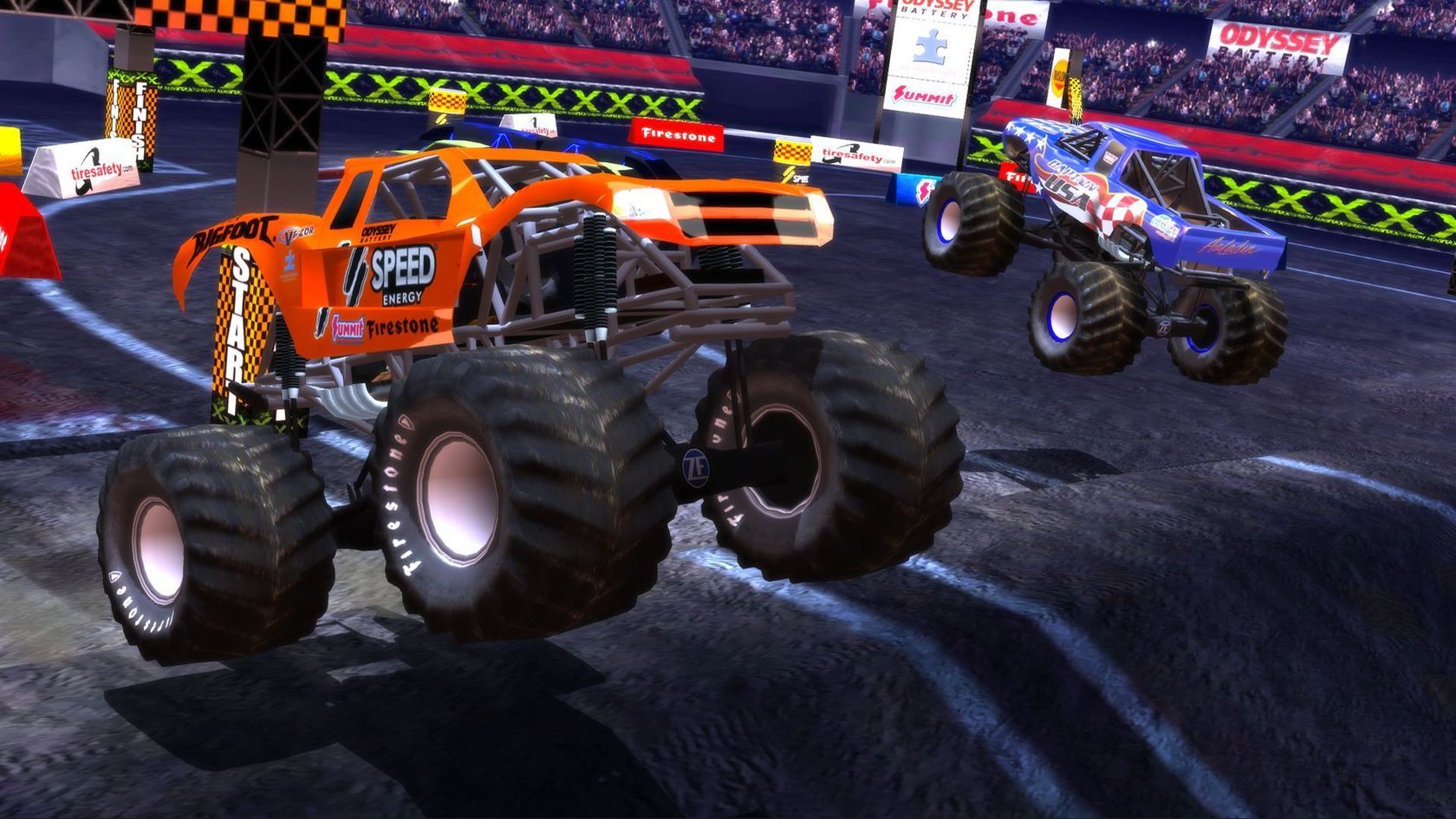 It’s odd. A monster truck is a hulking piece of machinery. Tonnes of supercharged destruction guided by the deft control of an ace driver. Driving one must feel like you have the keys to controlling a giant. Unfortunately Monster Truck Destruction never quite captures that sense of awesome power. It’s a shame too, as there are moments that it proves to be quite an enjoyable game, if only for short lived periods.

Monster Truck is a racing game in which you drive a variety of upgradable monster trucks through a number of races to progress in a selection of knock-out tournaments. The tournaments largely consist of head to head competitions in the same arena (though different track) where you are awarded points for each win, with each head-to-head often consisting of 3 rounds; the winner of the most going through to the next round.

The customisation options are enough to keep you interested in your current rig until you can afford the next and the prize money you get for each race is nicely pitched to give a sense of progression, without making it too hard or difficult to get the next modification or rig.

The driving is okay, the numerous caravans and cars you’ll drive over and smash into look like they are getting hit by something with the weight of your truck yet something doesn’t quite feel right. The trucks themselves though can often feel light and don’t seem to have the weight you’d imagine one of these beasts would possess despite the obvious caravan carnage and car crushing. You will find you are in the air a lot of the time too (in part thanks to the multitude of jumps and ramps) and on the sometimes tight tracks it can become very difficult to guide one of these things around the course. The tournaments are sparse with little to no real feedback on progression past a summary knock-out chart. There is very little  beyond completing the races and earning money to this part of the game and I can’t help but feel that a bit of rivalry, or tension between drivers/garages could have helped immensely here. Grudge matches and chances to beat old rivals would have added a lot to the experience and as such though, the game feels slightly sterile. Even when you are racing another truck, you each have your own little course to race and despite some overlap, usually with copious amounts of crashing involved  you don’t actually feel like you are racing against them properly, and this is a problem for the game.

It’s not that the mechanics are bad per say, in fact there is a lot about it that’s really quite fun (certain track design, customisation, the modelling of the trucks and the engine sound), it just appears very sparse. Despite there being a pleasing amount of customisation to be had in the garage, there’s never quite enough to hold your attention for very long.

There are a few technical issues too- the options to change visuals/command inputs are in a pre-game loader, which is a big no-no. Further, the version I played left me to manually configure the controls in a way i’ve never seen before in a game. I was literally separating out the appropriate x and y axis responses and mapping them to the individual keys. I’m not sure if this is an oversight or just indications that the game was developed for a game-pad and they never quite got around to optimising it for other controls. Either way, it isn’t an experience I’d like to repeat.

All in all you get the impression of an unfinished game. It’s fun, for the 40-60 minutes you’ll likely play it before you get bored, but there’s not enough there to hold the attention for much longer. It’s depth this game lacks over anything else, and as such I can’t recommend you get it. The designer and publishers are worth keeping an eye on mind, with more of a metagame this could be a genuinely fun title, as it is it’s like the caravans you’ll spend most your time driving into; largely empty.

Review based on a PR supplied review copy. Please check this post for more on our scoring system.