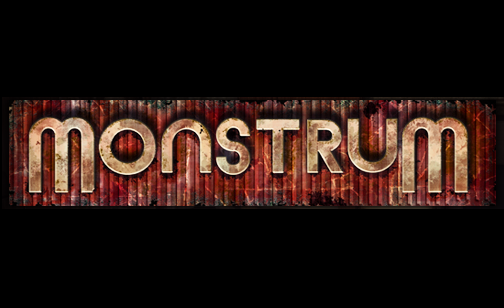 I struggle with horror games. Why? Because I’m a coward. I’m not embarrassed by it, but give me a game with a locker to hide in and I’ll probably quite happily sit in there until the evil horror lurking outside either dies of old age or goes to find a new career in chartered accounting. Part of me thinks my cowardice is a bad thing – I could never become Batman, for example, but then another part of me always reminds me that whilst I may be hiding in a locker, at least I’m not the one currently screaming in agony. Because of this, it’s a little odd, but I’ve been eager to try out Monstrum, a procedurally generated horror from Team Junkfish.

Maybe it’s an exposure thing? Perhaps I think that if I throw myself into enough terrifying situations I’ll grow a set of balls and learn to embrace the darkness? It’s not working.

Monstrum carries a fairly simple premise – you awaken aboard a ship with mandatory game-plot amnesia. With the rest of the ship’s passengers missing, duty-free closed and having nothing better to do, you make it your mission to find a way off the rust-covered hulk. However, in direct contravention of pretty much all health and safety regulations, deploying the ship’s life raft is a massively convoluted process that requires a ship-wide scavenger hunt to find various mechanical knick-knacks.

To make matters worse, the ship is procedurally generated. Every time you play Monstrum, the ship’s layout is completely different – as much as you try and remember your way round its twisting corridors, next time it’ll all have changed into something completely unfamiliar. This is Monstrum’s most powerful device, you can play as much as you want, but you’ll never shake the feeling of unease that exploring a new environment carries.

Oh, and it’s trying to kill you.

Oh, and you don’t know where it is.

Whilst Alien: Isolation may have beaten Monstrum to release with the ‘smart monster wanders around and tries to kill you’ trope, it doesn’t feature a changing map. Added to that, until you encounter said beastie, you don’t even know what kind of monster you’re dealing with. Monstrum carries its own menagerie of the monstrous – with two terrifying things currently lurking in its code, Monstrum’s developers promise that others will soon be joining them before final release. Which will you face? It’s for the gods to decide.

I was contemplating doing a traditional ‘Let’s Play’ video of Monstrum, but the audio plays such an important role in building tension that to talk all over it would be like painting a small stick figure in the background of the Mona Lisa. Besides, I think there’s enough reaction videos clogging up Youtube to last a lifetime, don’t you?

So turn your lights off, turn up your speakers and join me aboard the good ship Monstrum.