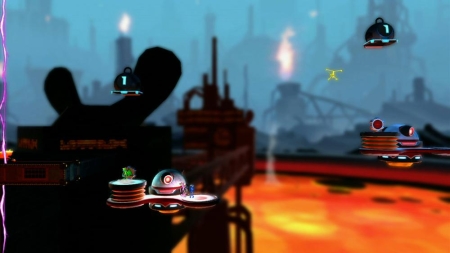 I openly admit that I have quite the soft spot for Twisted Pixel. Since 2009, they’ve released a handful of games over Xbox Live Arcade that have not only proven that the Texas based developer has an indisputable aptitude for creating inventive and laugh-out-loud funny games, but also that it’s possible for an entertaining and worthwhile game to be developed on a small budget; a mega-franchise like Call of Duty might pull billions of dollars in Activision’s direction with its’ annual non-stop onslaught of massive explosions and Hollywood flair, but Twisted Pixel understands that less is more and The Maw, ‘Splosion Man and Comic Jumper: The Adventures of Captain Smiley have all certainly benefited from that intimate touch which is only possible from having a mere eleven people on your team. Ms. Splosion Man is Twisted Pixel’s latest labour of love and aptly continues its’ trend of churning out endearingly comical and unique games.

Anyone who played the original 2D puzzle/platformer ‘Splosion Man back in 2009 will be able to enjoy the sequel’s amusing tutorial section without paying attention to what it has to teach newcomers. Accidentally created shortly after the capture of her male counterpart by Big Science, Ms. Splosion Man is able to “splode” (see: jump) three times before needing to make contact with the ground and recharge. Sploding comprises the core of the gameplay; ricocheting off walls and explosives barrels while avoiding obstacles such as spikes, lasers and toxic waste is often the quickest – or only – way to get around and pixel perfect jumping and lightning fast reflexes are required unless you plan to spend a substantial amount of time retrying levels over and over. Indeed a great many players – myself included – will inevitably stumble on more than a few occasions as a result of Ms. Splosion Man being even more difficult than its’ already challenging predecessor. Instances in which there is literally only one viable method for progression with absolutely no leeway are perhaps slightly too frequent and thus I found myself unable to either work out how to pass certain sections or couldn’t get the timing right. Regardless of its often maddening difficulty, Ms Splosion Man is brilliant fun thanks to tight controls and subtle additions in the form of new puzzle mechanics like trampolines, teleporter barrels and zip lines, along with the immense satisfaction of having your perseverance and willingness to not blink for five minutes at a time finally pay off. Having to retry a section for the thirtieth time might be infuriating, but the sheer elation I experienced whenever I beat a level with flawless inhuman precision was akin to how I felt after performing a perfect run on Sonic the Hedgehog on the Mega Drive twenty years ago.

All of this old-school fun has been absolutely smothered in Twisted Pixel’s trademark humour. As mentioned above, the tutorial section is hilarious and is an omen of how things play out across the game’s forty or so levels. In much the same way as her namesake, Ms Splosion Man skips, bounds, leaps, scuttles and slides around in a truly manic fashion, all the while babbling complete and utter nonsense and even reciting lyrics from songs by famous female pop artists and groups – seeing Ms Splosion Man splode off a barrel and fly through the air while proclaiming that her milkshake brings all the boys to the yard never fails to make me chuckle – and the comedy permeates throughout the levels, enemies, end-of-world bosses and even the opening advertisement for Twisted Pixel’s game engine, BEARD, makes me laugh every time I see it.

Ms Splosion Man’s single player campaign is accompanied by a multiplayer component that has up to four players co-operating through specially designed levels and puzzles that alter depending on how many people are present. Or at least that’s how it’s supposed to work. Unfortunately Ms. Splosion Man’s multiplayer suffers from the same problems as the original game. Everything is fine and dandy when playing with friends either locally or online, but should you find yourself on Xbox Live with three people without microphones as I often did, you’re asking for trouble. What results is the bewildering and infuriating sight of three different coloured characters all randomly sploding and either dithering about or trying to run off on their own and repeatedly dying. Communication is paramount in Ms. Splosion Man’s multiplayer and having to sit around and put up with morons who’ve clearly no idea what they’re doing is not fun in the slightest. But don’t let that put you off, because Ms. ‘Splosion Man is probably the most entertaining thing you’ll buy for 800 Microsoft Points all year. Twisted Pixel’s mastery of making relatively simple and genuinely funny games shines through almost every facet of Ms. Splosion Man and even outdoes many full-priced boxed retail releases in many areas – sheer fun included – despite it lacking anything radically different or revolutionary compared to its’ predecessor. If you ever played ‘Splosion Man and thought, “this isn’t for me”, then nothing here is going to change your mind or appeal to you in any way but fans of the original game and indeed fans of 2D platformers in general should download Ms. Splosion Man straight away.