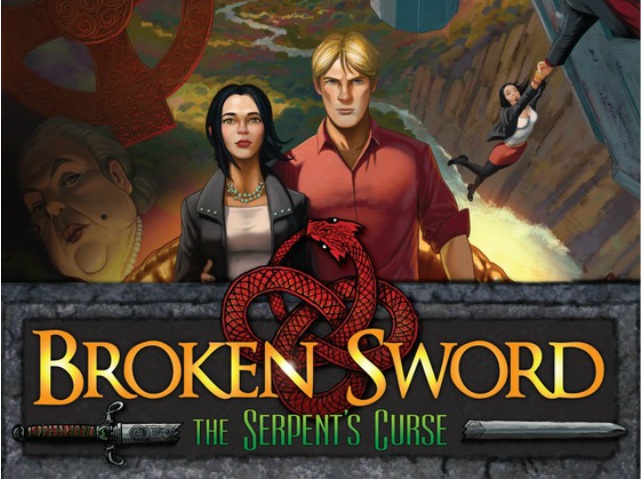 Well, it’s official. What was hinted and suspected, since a promised announcement failed to appear in July, has become public. Legendary adventure games designer Charles Cecil, head of Revolution Software, announced via Twitter today that there will be a new installation in the Broken Sword series of games. A Kickstarter has been organised to fund speed and polish in development.

The new game, subtitled The Serpent’s Curse, will see the return of leading characters George Stobbart and Nico Collard with their original voice artists. “When a mysterious painting is stolen during an armed raid on a Paris gallery,” says the blurb, “George and Nico are thrown by chance into the investigation together.” Hang on, isn’t this a series about Knights Templar and ancient conspiracies? Revolution Software, did you just steal the plot (I use the term loosely) from The DaVinci Code? It’s all connected, I tell ya!

The series’ fourth game, Angel of Death, took the step into the third dimension but The Serpent’s Curse, like Tales of Monkey Island, will take the step back (but not backwards) into 2D. While the character models and animations will be pre-rendered in 3D, they will be displayed in 2D on painted 2D backgrounds. Which I find is much more pleasant to look at and more intuitive to control for point-and-click games.

Serpent’s Curse will be released one way or another on PC, Mac and Linux (though no release date has been given). It is said to be well into development. Presumably it has been and will be funded by the profits from the remastered re-releases of their previous games over the past few years. The Kickstarter is set at an ambitious – but given the loyalty of the fanbase, not unlikely – $500,000. For £15 you can pre-order the game for digital download and the rewards get increasingly ridiculous from there.

“Development of the game is going well – we hope that you like what you see. Kickstarter funding will allow us to proceed at a faster rate, and ensure the game achieves its ambitious design. Without this funding we will risk having to cut back features and delay the game’s release.”

Hmm. It sounds fairly cheeky to me but it is an increasingly common model to crowd-fund the step up from ‘complete enough, we guess’ to ‘as complete as we’d like’. The alternative would be funding the entire product by Kickstarter, requiring significantly more like the $3.3 million raised (against hope and expectation) by Double Fine Adventure.

The announcement also came with a first look video, which is embedded below for your convenience.

If, like myself, you never played the Broken Sword games then the first three are available on Steam.