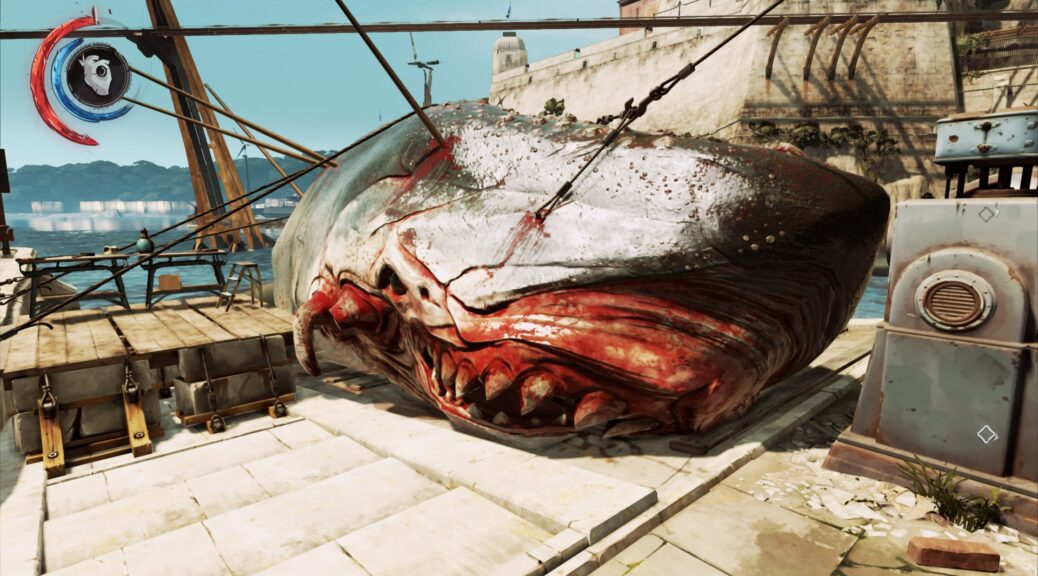 As Chris crawls back towards the eternal light of games, he makes his triumphant return to Our Week in Games. Well, triumphant is an exaggeration for a handful of words. It’s a Bank Holiday Monday though, so read on and enjoy what the team have to share.

Among all the stress and effort of moving house, I was ready to settle in for a session of Outriders this week. The trouble was, a massive update was required.

So I booted up Assassin’s Creed Odyssey and focused on taking out one of the Cultists. There are so many strands to the RPG era of Assassin’s Creed games, and hunting down Cultists can be done through the main story or by yourself. While deciding to hunt one down for myself, I came across one of the millions of side quests, this time the One Really Bad Day quest line.

I don’t often remember many quests in Odyssey, but this one was a standout with a perfect blend of action and humour.

This week I finally, finally got around to playing Arkane Studios’ Dishonored. And I have thoughts.

It’s the true successor to Looking Glass Studios’ immersive sims, most notably Thief, of which this feels like a spiritual sequel in many ways, from its sneaky gameplay to its strange fusion of industry and magic. I count those immersive sims as some of my absolute favourite games, so it’s a mystery as to why I’ve only now, almost a decade later, gotten around to playing Dishonored.

Because we’re basically made for one another…

…but we make an odd couple.

There is so much that I love about this game. I was compelled to complete it within days, which is likely the highest compliment I can gift Arkane Studios’ work. Dishonored is compulsively enjoyable; if its goal was to create the feeling of being a master assassin (which, yes, it was), then it succeeded. Life as Corvo Attano in Dunwall is one of supernatural power and it’s incredibly fun. It’s near seamless in its ability to create this perception of power, and each mission offers new opportunities to exercise it, from sumptuous masked balls to gaudy brothels.

Much has been made of Dishonored’s world-building. It’s true that it crafts a distinctive world with texture and grit, but I don’t think it ever truly digs beneath its own surface. At least not enough to matter. And world-building is no substitute for a compelling story filled with interesting characters, which is the game’s foremost shortcoming.

The story it tells is inadequate to the talents of those who penned it. There are some whip smart people behind this game, developers I love and respect – folks like Harvey Smith, Terri Brosius, and Austin Grossman. But somehow they mismanage the telling of this tale in a way that I’m still trying to wrap my head around.

It’s a story where nothing happens until two thirds of the way through, in an almost identical error in pacing to Bioshock. You know what that turning point is by virtue of the fact that, owing to a lack of development and character drama, only one thing can happen (for a lesson in how to avoid this, see the original Deus Ex).

It’s a problem with a lot of gaming narratives; they eschew the ebb and flow of drama that makes stories worth following in favour of piling everything into a single big twist, doing nothing either side of it. I’m astounded that the terrific folks behind this tale both got away with it and that gaming culture at large let them. Is it a problem with how we look at narrative in games? Maybe. But I really don’t think this is how it should be done.

It’s a shame; the premise is so good. It works its way to an effective and powerful final scene, but I find it hard not to feel disappointment at what that scene could have been if the game had bothered to do the dramatic legwork leading up to it. Of course, lots of people disagree with me, and that’s fine. I’m not trying to set myself up as some kind of arbiter on how things Ought to be Done. But I can at least try and convey how I feel, and I know I’ve experienced better than this by its genius developers.

Luckily for Dishonored every other part of it is exemplary. It’s a beautiful game, something like a water colour painting – clouds etched across the horizon, dazzling reds and oranges dusting a world made of blackened stone and rusting metal.

There’s more here that works than doesn’t, and it nails the bit that matters – namely the act of playing. With that, I’m looking forward to its sequel.