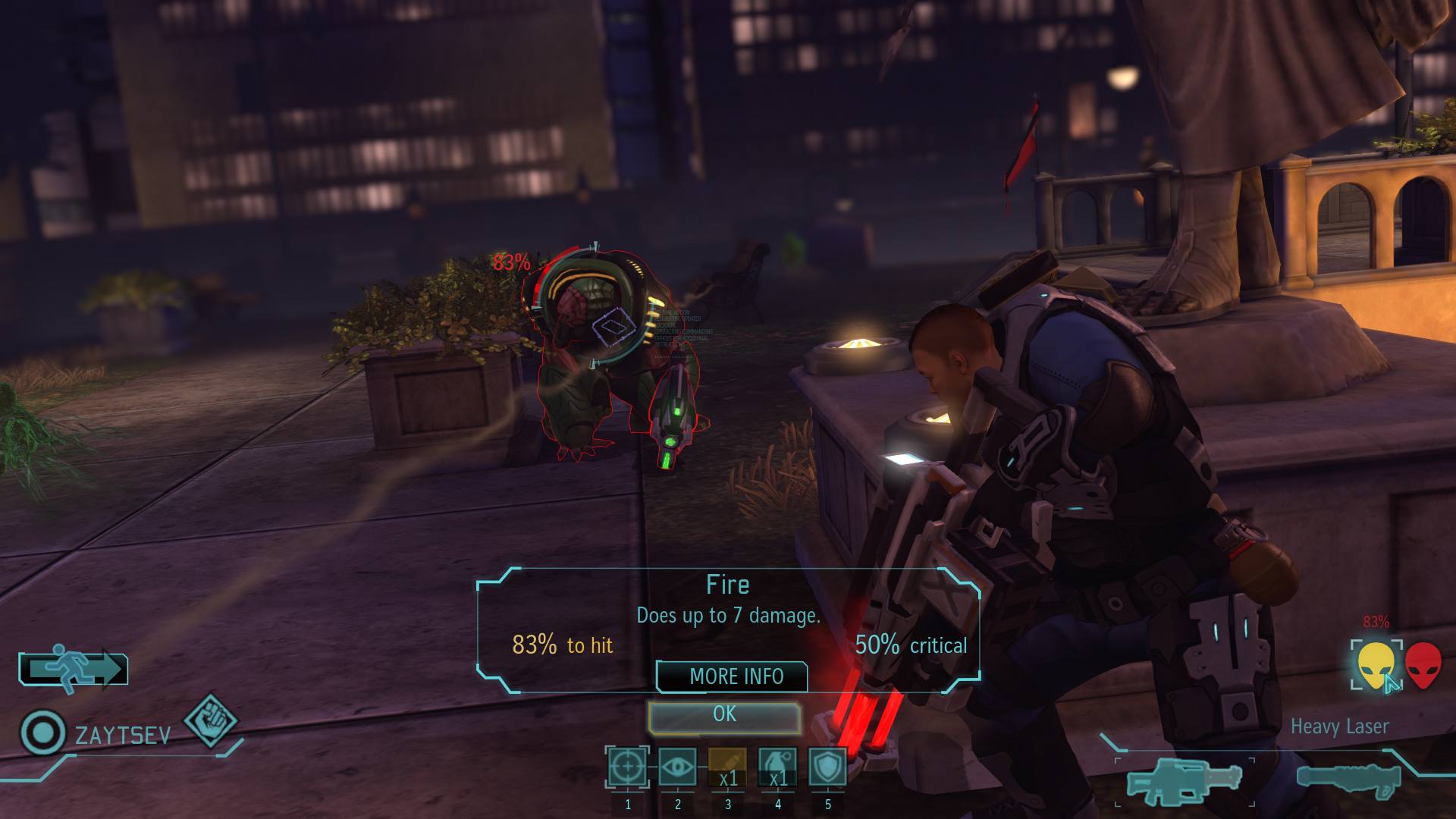 I’ve been pondering today about how this year seems to have gone by oh so fast, and then I realise that this is already the fourteenth edition of Our Week in Games. Where has the time gone I wonder? Maybe someone flipped a switch and sent us back in time to the days of the Mega Drive and turn based strategy games? I think Edcrab and Jordan had something to do with it…

So I got XCOM. Probably shouldn’t have when I’m still fooling around with Dishonored, but it cried out to me. The universe, shocked by this hubris, decided to make me pay for it.

XCOM is an amazing turn-based tactical game, oh yes, no denying it, but the development team had one obsessive architect who so loved the roof they’d designed for a spaceship that they forced the player to look at it. That’s the only logical explanation.

Nowhere else are roofs ever an issue, but when my long-suffering troops raid a downed spacecraft? It is hell. The cursor thinks it’s clicking on a place that’s not even in view, soldiers are obscured at inopportune moments; I haven’t had this much woe with a camera in an A-list title since… well, ever. I genuinely can’t think of another title that’s had me reloading a saved game because I’ve been foiled by the camera. Too often had to undo a move which saw a squaddie run behind/below scenery in blatant disregard for what I’m trying to click on, and no amount of fiddling with the angle helped.

Not being able to access the ESC menu during actions suddenly went from “thing that I’ve never noticed” to “bloody nuisance when I’m trying to reload a save game”. But in the same way, eventually the team clears the place out and I forget it ever happened. Still, I would’ve expected my nemesis to be chrysalids or mutons, not ceilings…

In a moment of weakness, nostalgia and inebriation, this week I bought a Sega Mega Drive. As such, I have been fulfilling my reputation as being an up-to-date gamer who follows all the latest trends by playing Sonic the Hedgehog. A game that is only 21 years old. As a true classic it still stands at the pantheon of pure platforming pleasure, surpassed only by its sequels, Super Mario Bros. 3 and, the more recent, Rayman Origins.

This comes as no surprise, there’s a reason that Sonic is still revered to this day despite 17 years of terrible games. What did come as a shock though was the Mega Drive itself, and it made me realise once again what made consoles so great and why this generation and the next will be redundant. Playing games on the Mega Drive is just so damn easy. From unpacking Sonic to playing it took ten seconds, just slam the cartridge in and get going. For comparison, to do the same for Resistance 3 on PS3 it took one hour, I had to install the game, download updates, lose the will to live etc… before I even hit the start screen.

With Sony and Microsoft’s push to make their consoles become media centres at the hub of your home, consoles are no different from PCs any more. They’ve become homogenised and deviated from what once made them so special — ease. The ease to play a game, to just sit down and play. In the past few days I’ve played my Mega Drive more than any console, not because of novelty but because it exists solely to play games and that’s what I love.

It’s late at night and I’ve just been surrounded by a pack of ravenous wolves. In the past I might have been slightly perturbed by this unfortunate event, but now? Now things are different. As the pack charged I swung my blade at my first wolf, tearing open its hide. I swiftly turned, before deftly decapitating another. Yet even as my blade swung, three other wolves struck from different directions, knocking me to the floor.

The wolves stood over me, their slavering jaws preparing for a deadly lunge, but still I smiled. From my precarious position on the ground, I extended my hand and performed an ancient gesture. For I am Zan Mezum, and I have just come from the necromancer’s tower. There I read the 24 page essay entitled The Unabridged Ruin. I found the writing to have moments of cleverness, especially an essay which taught me the very secrets of life and death.

Shuddering, the disembodied wolf head began to move. Bouncing along the ground, it flung itself (quite literally) into combat. Taking the others completely by surprise, it tore open the neck of one wolf, spraying blood across the grass. Even as it fell, I gestured again and moments later it staggered lifelessly back to its feet.

Dead wolves and living wolves locked in ferocious combat. Blood and severed limbs covered the battlefield as a blanket of gore in this picnic of death. As each wolf fell, it found no peace before I dragged it back into the light to join my legion of the dead.

Finally the last wolf fell, torn apart in a sea of reanimated carcasses. I stood up, covered in blood, surrounded by a rabble of undead wolves. Looking around, I laughed. I laughed long, loud, and ever so slightly maniacally.

Dwarf Fortress. Losing may well be fun, but winning can be so much better.

I’ve been playing all sorts of things this week. I started the week by finishing off Dishonored and writing my Verdict on it, then I started it again from the beginning. It still works really well for me, but is anyone starting to criticise it for minor failings yet and call it an awful let down? I haven’t seen much backlash against it, which can only be a good thing.

I had a bit more of a dabble in Torchlight 2, a game which I have a feeling is really quite good (and probably better than Diablo 3 in all honesty) but I just haven’t been able to really delve into it as much as I would like. Though my Engineer character is growing on me as I level him up, his healing bot is certainly something in his favour. I did want to get into some more Borderlands 2, but again time hasn’t been on my side. These two are definitely titles I want to play more of before the year is out.

Somewhere along the line I let myself get pulled into an F1 2012 race with Craig from Gaming Daily and David from Plughead. We decided to take to Malaysia, and thankfully Craig allowed some assists such as automatic gears as I was just appalling. I love Codemasters’ other racing titles, but I am yet to get to grips with their F1 games yet. In a 14 lap race, I managed to get lapped by the whole field, and nearly lapped by twice by Craig who won the race. It wasn’t my finest hour.

To recover from that trauma, I embarked on a bit journey from London to a small town in Germany in Euro Truck Simulator 2. I am in the process of paying off a massive bank loan which allowed me to buy my own cab, thus why I took on a longer trip than I had done before. SatNav on, I set off in my left-hand drive cab (bought in France) to a ferry terminal on the English east coast. Driving at night, in the rain on British motorways is quite relaxing, and upon arriving in mainland Europe, I was met with bright blue skies and lovely green fields. I managed to delivery my cargo successfully and pay back my debt all the while listening to the Band of Brothers soundtrack. A great way to unwind after my traumatic F1 2012 experience.