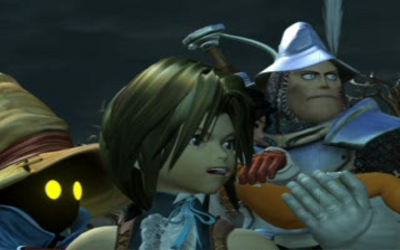 I’ve just had a quick glance at some photos from last night where I was dressed as Zombie Hulk Hogan and realised that Robert Florence is doing a wrestling show in Glasgow tonight which, when put together, makes me slightly excited for the release of WWE 13 this week. With the Attitude Era mode I am hoping it rocks a little bit more than previous titles have.

This past week has seen a lot of debate going on about an article the aforementioned Robert Florence wrote on Eurogamer. I’m not going to comment on specifics from that piece or fallout, but I would like to take this moment to clarify our position here at Reticule Towers. We are not influenced in how we judge games in our Verdicts by relationships with PRs/developers or by advertising. From here on, our Verdicts will clarify whether we bought the game ourselves or if it was supplied by a PR agency or the developer. With that out of the way, onto Our Week in Games. Before you hit the break, we will have a Halloween themed piece coming this week..spooky!

Apart from Hotline Miami, I’ve had a pretty quiet week of gaming. To make up for the lack of new releases I returned to the stalwart League of Legends to catch up with the new champion (a creepy spider lady) and the revamped Twisted Treeline map, coming just in time for Halloween. If you’re not already a LoL fan you probably won’t be interested in these developments, Twisted Treeline is the 3vs3 map that puts a bit more emphasis on small scale teamfights and less on the extended laning phase of the classic Summoner’s Rift map. The new tighter version of the map feels good, with the shrine objectives in the jungle serving for a catalyst for all 6 players to come together and battle it out.

Unlike Summoner’s Rift, Twisted Treeline doesn’t have a well known meta-game in terms of composition, so you get all kind of character combinations through the matchmaking system, that makes for a pretty varied experience. On the downside, you often get people who don’t really know what they’re doing and will try and sit in the lane and farm minions, when really they need to be more reactive to other players. I don’t see TT taking over from Summoner’s Rift in any way, but like Dominion and Proving Grounds, it’ll be a fun diversion, especially for the more casual players.

Despite being hyped for the release of Football Manager 13, I’m waiting for the final build, rather than plowing ahead while the game is in beta. I’ve heard talk of a crossing issue with the match engine which is too easily exploited and I’d rather wait until these kind of issues are ironed out before resuming my neverending quest to take Sunderland to the heights of European football. The new UI is pretty darn slick though.

In a week beset by long hours at work followed by late finishes, I’ve been lucky to find any time at all for gaming. So, in the spare few minutes I did find available, I did what any sane individual would do, and booted up Trackmania.

It’s been a while since I leapt into the international arena that is Trackmania Nations, and it’s nice to see that my skills at the game haven’t changed at all in my absence. That is to say, I was rubbish when I left, and I’m apparently just as rubbish now I’ve come back.

My first few laps are predictable enough. Sadistic levels designed by deranged artists plunge me again and again to my doom. When I do finally cross the finish line, I find it’s nothing more than a decoy finish-line designed to confuse the unwary. Lewis Hamilton never had to put up with this nonsense.

With Trackmania, however, failure is not the end. Screw up utterly, and you can restart the race with the tap of a key allowing you another run. Screw up ten times, twenty times, it doesn’t matter – all you’re looking for is that one perfect run. That one perfect run that coincidentally places you ahead of the French.

Trackmania is a splendid example of what happens when you strip away all the non-essential clutter that so many games seem to inflict upon you nowadays, leaving you with pure unadulterated gameplay. It’s a game that occurs at a blistering pace, with restarts never more than a hammer of a key away. In a world where games have a habit of taking themselves far too seriously, Trackmania is the curly straw in the glass of racing games.

I’ve been going all retro this week when I can with Final Fantasy IX, I would say that it is my favourite Final Fantasy title, but as I have only played IX and VIII, that isn’t really much of a claim. Actually, I think I started XIII, but quickly moved onto something else.

My love for IX is all thanks to the amazing characters, with Vivi leading the way. There isn’t any voice over work, it is all done with text bubbles (as you should all know), but the development of the characters through these is immense. I also love the art style, while VIII had very rigid looking characters and scenes, everything in IX feels much more friendly and engaging. I’ve only just started playing it again really and I have come to the first village after the Ice Cavern, but with every passing moment, the memories of playing it eleven years ago come flooding back.

While we have seen some classic titles come out in the years since IX was released, there are few which, personally, I think quite compare to it.

So after a fairly quiet few weeks on the gaming front, it feels as if this week I’ve been playing everything under the sun and more. Possibly in an attempt to make up lost time, possibly because I just realised I have so many great games I’ve not even touched yet.

I started off the week with F1 2012. A new season and a new direction saw me along side Paul di Resta with the Force India team. The prospect of an all Scottish team is something that I felt I couldn’t miss out on and even if I were to perform well over the course of the season, a contract offer from a better team wouldn’t be enough to tempt me away. Time will tell as I’ve upped the difficulty and plan to play longer than the 25% race length I did last season.

Next up was Undead Nightmare and whilst very short this was rather enjoyable. To see the land I once knew as bustling and filled with opportunity, turned into well… zombie hordes, was strange at first. The humour and the awesome gun fights were still there, and to see returning characters both undead and alive was a pretty nice touch. With new challenges, achievements and the tameable four horses to ride around on, this was certainly not a small DLC pack outside of the main story.

Last year I picked up a copy of Human Revelations and ever since completing and enjoying the game so much, I’ve always wanted to go back to where it all started and play the original Deus Ex, also technically the next game chronologically. Thanks to Steam’s awesome sales I managed to pick it up for barely a few pounds recently and played through it in a couple weeks. While it may not have aged all that well over the years, I was happily surprised to find Deus Ex very familiar. Human Revolutions seems to have stuck to the original style of gameplay very closely and I found I was able to pick up and play the game pretty easily. The story is pretty decent too!

Next Stop Battlefield 3’s new DLC pack Armored Kill. I bought this a while ago but haven’t had all that much spare time to actually play it until now. I’m loving the open feel of the maps and the vehicle warfare. However, being an Xbox player with these giant new maps it does tend to feel a bit quiet at times. I’ve been sticking to Rush and Conquest on the new maps anyway, Alborz mountains is probably my favourite of the new bunch.

As if all that wasn’t enough to last me a week I’ve also been playing Sonic Adventure 2, Fallout 3, Deponia and Prince of Persia: The Forgotten Sands! Time to go outside I think…