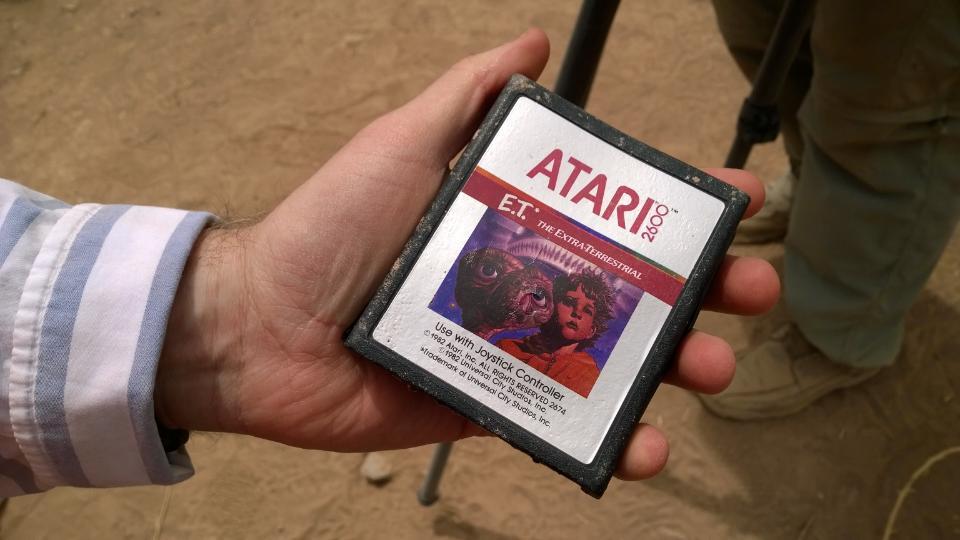 This weekend saw one of the long-standing rumours of the games industry proven right. The infamous E.T game for the Atari 2600 was long thought to have been buried in a New Mexico landfill. As part of an Xbox documentary on the game a team went to New Mexio with Larry “Major Nelson” Hryb handling the first copy of the game that was recovered. Who said the games industry didn’t have a history?

With that, we bring you Our Week in Games. I’m approaching the due date of my dissertation, learning a new profession in my spare time and entering exam period, so naturally I’ve started a new playthrough of the Mass Effect trilogy.

Mass Effect is probably my all-time favourite game series, if not individually my favourite games, so I thought it was time to actually play all the way through to the end with a male Shepard (Bernard, since you ask), and to try and explore some of the characters I’ve not actually spent that much time with and to try and explore a slightly different tone of Shepard. I’m also aiming to not do what I’ve done in all other playthroughs, sometimes on purpose and sometimes by accident. I’m aiming to not sell Legion, and stop getting Thane inventively killed, which I somehow manage to do every single time.

I’ve also inexplicably played none of the DLC, so I’m working up the funds to buy those, mainly so I can stop avoiding spoliers from the Citadel and Leviathan DLC for ME3.

It always feels a bit counter-productive to replay old and familiar games, especially when they’re as heavily story focused and as linear as Mass Effect sometimes is, but there’s a simple pleasure in just experiencing a story again, and trying to find new, or even just different, ways to exist in the game world. After a long day of work,it’s a bit like settling into a relaxing bath, if you like your baths to involve finding out that robo-spacecthullu is coming to kill all sentient life in the galaxy.

Less relaxingly I’ve also been playing interactive fiction detective game Make It Good, which involves playing a drunk, incompetent detective and trying to fumble round and solve a murder without ruining your life or career. It’s definitely worth a look – it manages to create a palpable sense of desperation whilst also creating a small, but incredibly detailed set to fumble round. It reminds me a little bit of Pathologic in the sense of hopelessness and incomprehensible detail that it manages to create during your first couple of playthroughs, and has the same satisfaction of decoding the secrets of a game world that really, really doesn’t much care for you. It’s also quite fun, and has one of the best text parser systems I’ve seen. So, I’ve had a rather relaxing Easter (when I haven’t been swamped with revision anyway), I’ve managed to get my hands on the widely anticipated PC version of Dark Souls II, along with the latest Thief. Having the time to play both is a luxury I don’t have at the moment, however I found it all too easy to put down the remarkably average and stale Thief in favour of the the stunning and immersive Dark Souls II.

Dark Souls II does everything a sequel should be doing (listening, Thief?) It keeps all the fantastic core elements of the first game, while improving everything that needed to be improved. Sorcery is now a viable combat method, there’s a plethora of new gorgeous environments, characters animations flow a lot better, old weapons are back along with tons of new ones, same for armour, the list goes on and on.

Thief on the other hand is a classic example of sequels done wrong. All the core elements of a Thief game have been stripped, and replaced with boring, linear and repetitive sequences. Open window, complete whatever objective you had, exit through window, cue loading screen, rinse and repeat. Where’s the large, sprawling, open environment that we all know and love? Where’s all the character Garrett had from previous titles? Why is he now a shoddier sounding Batman with no personality whatsoever? Don’t try and fool me with your “but look, we have an open hub world that you can explore at your own leisure! And it’s so pretty! That’s good, right?” No. First, it doesn’t even feel like an open hub world seeing as there’s loading screens scattered about every ten feet (you’re not kidding anyone with the “slide through the crack in the wall while the game loads” animation). Secondly, I wouldn’t be able to fully appreciate the environment seeing as you went slightly overboard with the fog effects and black/grey pallet. So no, Thief. I am not a pleased man.

What’s that, Dark Souls II? You’d like me to stay up all night playing you until my fingers are sore and my eyes can’t take anymore? Don’t mind if I do. I haven’t really kept my promise from last week to avoid Football Manager, indeed I am playing it right now with the Cardiff v Sunderland match in another window on my screen. It really is too easy to multi-task with this game.

However, I did spend some more time with Diablo III: Reaper of Souls which led to my positive Verdict and I researched Project CARS as I talked about the new trailer for the racer.

Elsewhere I dived into Luftrausers very briefly before starting to try and get stuck into Wargame: Red Dragon which is an entirely more complex RTS than I first imagined. If it was a card-battle game where you select a deck of your units, I think I would enjoy that. As it is, I need to get to grips with how everything works before I can think about my Verdict.