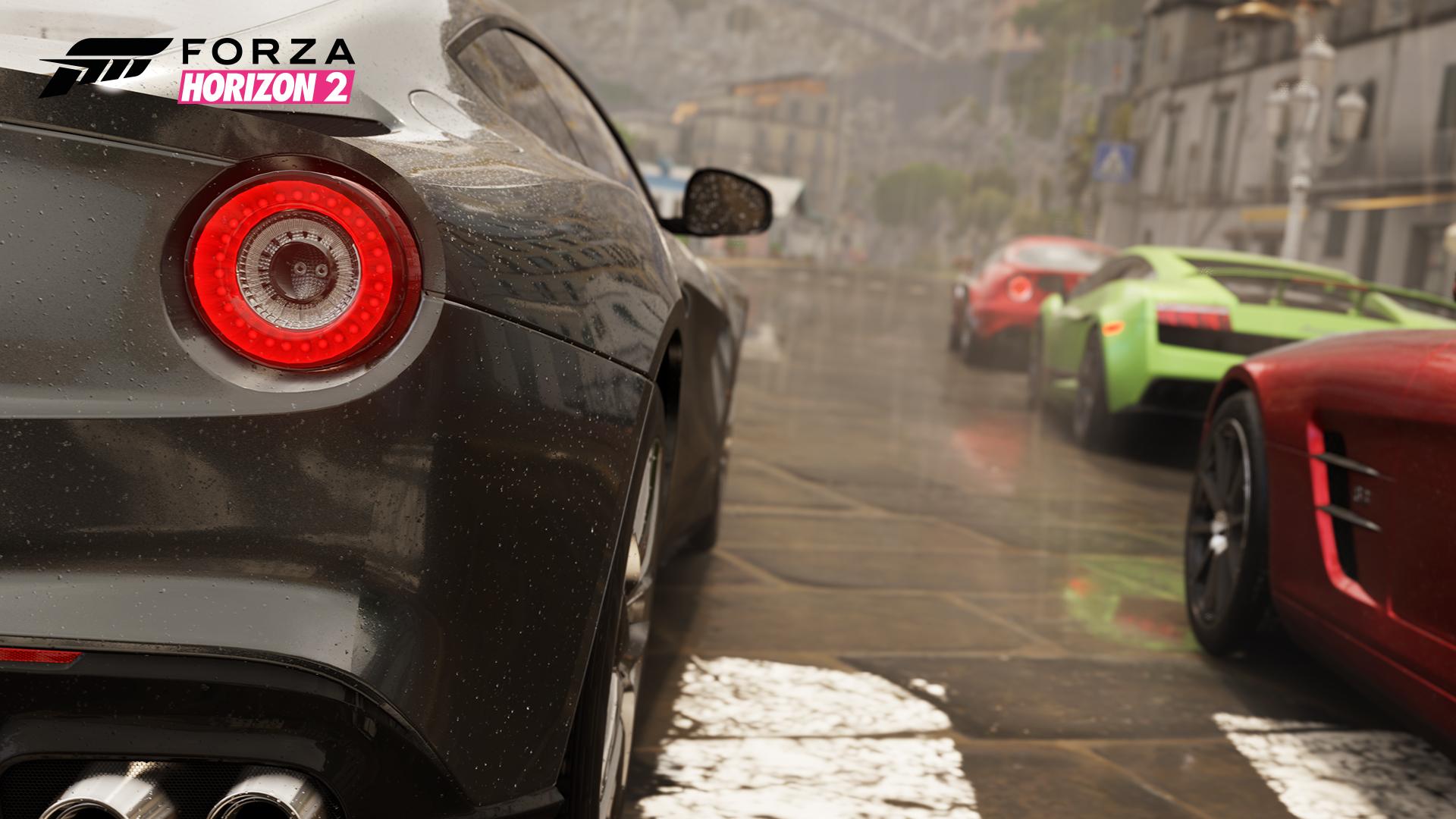 Fresh back from a weeks holiday I feel as if my gaming interests have been reinvigorated. I bought a ton of games in the Steam sale and look forward to playing them all over the next… five years. In fact recently I’ve almost completely abandoned console gaming in place of hours on end of Spelunky and some multiplayer PC games, which just goes to show that the recent crop of game releases really hasn’t grabbed my attention quite as much as I thought it would. Thinking ahead the only two console games I’m remotely interested in are The Witcher 3 and Forza Horizon 2, while I’m spoilt for choice right now on PC. Oh how the times are changing.

I’m walking along the road having just finished watching a cutscene heavy on exposition yet light on plot, when I see a Porsche-analogue screech to a halt. It then reverses furiously up the road, before slamming on again, and turning back to face me. There’s a beat, then it moves off again slowly following a line of traffic. It stops at the traffic lights behind a black SUV meters from my position.

The penny only drops when it pulls off again a little too slowly: I was being hacked by another online player and I (really stupidly) hadn’t realised. I was fascinated by the weird behavior of the car, for some reason not realising that it was probably another player behind the wheel.

I whip out my heavy machine gun, pop the two back tyres and unload the clip into the car as it tries to flee. As I reload the car slams into an oncoming vehicle. I fire another clip into the car and it explodes. I’m granted some xp, and a civilian calls the police.

Watch_Dogs aside I’ve been playing Rodina. It’s a space-based game where you fly from asteroid to planet, to asteroid collecting supplies and data packages. It fairly rough around the edges, but as you can actually get out your ship, walk around, and then visit every room In Your ship, it could possible be the game we’ve all been waiting for…

It’s early-early access but it’s already quite impressive. I’ll have words up on it this week.

Why oh why have I not played the Witcher series sooner? After watching E3 and being stunned by the look of Witcher 3, I decided to pick up the first two installments on STEAM’s Summer Sale, at £4.39 for both, who could resist?

I played the first Witcher for around 8 or 9 hours, before the unintuitive combat system and dull voice acting irked me just that little bit too much. “Blasphemy!” I hear you shout “you didn’t even finish the first game!”, not to worry friends, I caught up on all the lore via the Witcher Wiki before moving onto Witcher 2 (with quite extensive knowledge I’ll have you know), and I was pleasantly surprised to find absolutely every problem I had with the first game had been abolished. Combat is a joy, the voice acting is spectacular and the graphics are so vastly improved you can actually feel yourself fully immersed in the world of Geralt of Rivia. I plan on giving the first game a try once I finish my second playthrough of Witcher 2 because many claim that the story in the first far exceeds that of the second’s (however I find hard to care about many characters and their motivations when they’re blander than a documentary on monotony itself), but I’ll give it a try.

Witcher 3 looks to improve even further on the second installment, with a massive open world teeming with side quests and monsters, I can’t wait to get my hands on it. In the meantime, the world of the Witcher has engrossed me so much, I’ve actually looked at purchasing myself the original books, and finding those which haven’t been translated into English yet online. The books take place before the game series even starts, so it’ll be nice to find out a little bit more about Geralt’s roots.

For those of you that haven’t played the Witcher series, you’re missing out on the RPG experience of a lifetime, and if you can get past the rusted mechanics of the first game, I’m sure more RPG treasure awaits you there. I shall report back when I do! This week has seen me go gaming crazy after buying a boat load of games during the recent Steam sale. I’ve dabbling with Commandos, Magicka, Serious Sam, Unreal Tournament, Spelunky (as always) and laterally Torchlight II.

Since trying out Path of Exile my interest in ARPG’s has increased dramatically and I’ve taken quite a shine to Torchlight II in the past few days. I’ve not tested out the multiplayer side of things as of yet but the singleplayer is easy to pick up and really enjoyable to play. Of course I rolled a fire mage as is standard for any game ever, and though I might not be totally clued in on stats and equipment I have yet to die so I must be doing something right!

Very limited gaming this week, I’ve been too busy with work and the World Cup to get down and dirty with anything really. I might, with some luck, have some words on GRID: Autosport and Pro Cycling Manager soon.