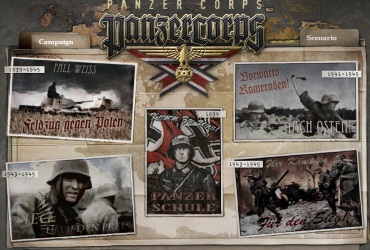 If I came up to you a few years ago touting a new World War Two game I would more than likely get a sharp look, a slap to the face and a hate filled comment along the lines of ”World War Two? Why would I want to play yet another bloomin game set in that time period? Can’t developers think of anything new?”. Unsurprisingly publishers saw this discontent rising and pushed their development teams to create new games not set in the tired, cliche ridden setting of 1939-1945.

Present day and the market is awash with games spouting phrases like ‘realistic’ ‘modern’ ‘grey and bland’. Okay so I added the last one myself, but we all know where I am coming from, the ‘modern’ setting has become the new World War Two, overdone and starting to irritate gamers.

It is fortunate then that you can still head back to the old battleground with the upcoming release of Panzer Corps from The Lordz Games Studio. I will mention now that Panzer Corps is a turn-based strategy game, and yes there are hexes. But do not let that turn you away, those pesky hexes can be made invisible on the game map and you will find a game which is deeply layered and very involving. In my hands-on with the game I have tinkered with the tutorial which is a must to figure out the basics of the game. Fortunately you will be able to start playing with confidence once you have played the first couple of training levels, while there is plenty of depth promised, you won’t find yourself drowning because you haven’t read a 200 page manual.

That is most certainly a good thing, there are many turn-based strategy games which are so complex that most everyday gamers would be put off right away. What appeals to me about Panzer Corps is that everything is clearly laid out for you, the user interface is clear and easy to use and handy tooltips appear when you are about to attack the enemy to give you an indication for how your troops will fare. It isn’t a foolproof guide, but for gamers like myself who don’t play this type of game everyday it is a welcome help. Underneath this friendly surface, you will find a true strategy game, so you die-hard strategists shouldn’t despair. I was pleased to see the attempts to welcome in a more casual audience. The library which details the units on offer is pleasing nerd-out moment and shows the research that has been put into the game.

I have high hopes for Panzer Corps and I am eagerly awaiting the chance to play the finished game and play through the campaign which will see you take the role of the Germans and follow the battles across various fronts during the war. The promise of having troops who stay with you through the campaign sounds promising and reminiscent of the Close Combat series. And any comparison to that legendary series is only a good thing.

One thought on “Panzer Corps – Hands-On”