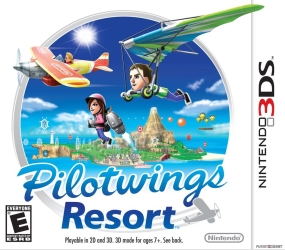 When the launch games for the Nintendo 3DS were officially announced, I personally found it odd that Nintendo chose Pilotwings, of all things, to headline the software line-up. After all, it’s a franchise that’s more than a little obscure and one that has gathered a small yet loyal following rather than the behemoth fanbases that properties such as Super Mario, The Legend of Zelda or Pokémon have amassed over the years. Furthermore, I’ll confess that I never played Pilotwings on the SNES or Pilotwings 64 on the Nintendo 64, so had no prior knowledge of what the games entailed, how they played or what exactly the aforementioned loyal fanbase found so appealing about them. And after playing Pilotwings Resort, I’m still at a loss as to why the series is held in such high regard by its fans.

In all fairness, first impressions with Pilotwings Resort are reasonably good. The game controls sublimely, the analogue pad being more than up to the task of giving the player the means of precisely controlling their choice of flying machine, of which there are quite a few. The plane, rocket belt, hang glider, squirrel suit, jet plane and pedal glider all handle completely different to each other but are all nonetheless easy to control, even if things like landing and advanced aerial manoeuvres take a little time and patience to entirely master. Likewise, Wuhu Island – which you may recognise from Wii Fit and Wii Sports Resort – is where you’ll spend the entirety of your time playing the game, so it’s a good job that it’s very easy on the eyes. It’s an extremely vibrant location with fields, villages, mountains, bridges and volcanoes all bursting with colour and it looks even better with the 3DS’ 3D turned on; all the aforesaid landmarks popping out of the screen and giving the huge island a literal sense of scale as opposed to it merely looking like a large videogame location with an impressive draw distance. When viewed purely as a showcase of the 3DS’ graphical horsepower 3D capabilities, Pilotwings Resort is – as far as I’m concerned – utterly flawless and if you want to show off your new handheld to friends and family then this is definitely the to do the job. Unfortunately, after that awe-inspiring first impression, things start to unravel within an hour or so when Pilotwings Resort’s issues with longevity and content become glaringly obvious and the game fails to maintain its initial sense of grandeur. It’s first problem is that it only has two modes. Free Flight Mode is exactly what it sounds like. You pick a vehicle and are let loose on Wuhu Island to explore and find collectables and suchlike; however, you are working under a time constraint that can be lengthened by finding collectables and reaching certain milestones in Mission Flight Mode, which forms the bulk of Pilotwings Resort’s playtime. In Mission Flight Mode, the player is presented with a series of increasingly challenging objectives with strict parameters that all require you to basically either shoot targets or fly through checkpoints and a one-, two- or three-star rating is awarded in each mission depending on things like accuracy and how quickly the mission was completed.

And that’s it. Free Flight Mode holds very little appeal to anyone other than those who have that insatiable desire to collect pointless things, whereas Mission Flight Mode can feasibly be completed in around four hours or so. Worse still, not only is Mission Flight Mode criminally short, but the missions in the first four tiers – Training, Bronze, Silver and Gold – are for the most part painfully dull and ludicrously easy. It’s only when the later tiers – Platinum and Diamond – are unlocked that the game starts throwing missions at the player that represent any sort of a challenge and this brings another problem into view; namely, there’s less of a difficulty curve and more of a difficulty cliff. When you reach the Platinum tier the difficulty spikes up and a lot of players may hit a brick wall and find they are unable to progress, which is jarring considering how much of a push-over everything else is up to that point. To add further insult, Pilotwings Resort is devoid of local or online multiplayer of any kind so you won’t be flying around and sharing the experience with friends; something that would have substantially upped its longevity. There’s not even any Street Pass functionality in Pilotwings Resort, so a feature as rudimentary and, dare I say it, obligatory as comparing scores with people on your friends list isn’t even supported, which is a shocking omission given how working within time constraints and high-score chasing are what make up the bulk of the game. Out of all of the launch games for the 3DS, Pilotwings Resort was the one I was most looking forward to. It was different to anything else I’d played before and I was under the assumption that taking a break from racing cars or shooting at terrorists would make a welcome change. While this is somewhat the case, Pilotwings Resort’s leisurely pace and pretty visuals can’t distract from what is essentially not even half a game. The bewildering absence of being able to play with friends or compare high scores with them severely mars a game that was already low on content to begin with and out of the content that is present, around two thirds of it is downright monotonous while the final third will alienate a lot of players due to the lack of a gradual learning curve. Whether this is actually indicative of past Pilotwings games or not, I can’t help but feel that having not played them I’m really not missing much and Pilotwings Resort serves only to remind me of how much I want to be playing a new Mario, Zelda or Pokémon game on the 3DS; franchises that are far more worthy of serving as flagship titles in the system’s launch line-up than this.

One thought on “Pilotwings Resort (Nintendo 3DS) – The Verdict”