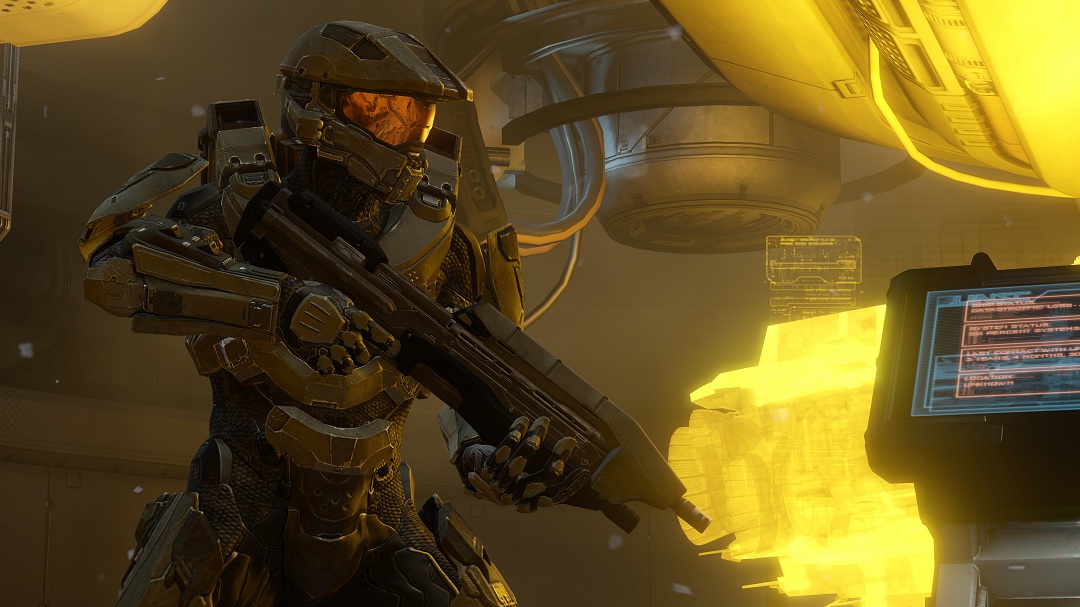 The world’s largest consumer electronics show, E3, will kick off later today, and the biggest games publishers and developers will be eagerly showcasing their wares in an attempt to build up anticipation, excitement and a shed load of hype for the biggest releases set to appear over the next twelve months.

I’ve already waxed lyrical (or something) about what I’m most excited about in regards to Sony and Nintendo’s E3 presence, and now – last and kind of least – it’s Microsoft’s turn in the hot seat. I apologise in advance if the comments below seem a tad on the negative side, but Microsoft’s got very little coming in the way of decent first-party releases; or at least, ones that I personally could give a flying toss about, anyway. So yeah… sorry about that. Anywho, without further ado, brace yourselves for hype and negativity in equal measures, as we set off into space to reunite with an old armoured acquaintance, lament the fact that Kinect isn’t that great, and cry into our Banjo-Kazooie comfort blankets as we reminisce about the days before Microsoft neutered one of the most talented developers on the planet. Halo: Combat Evolved was probably the main driving factor behind the original Xbox’s success, however limited that might have been when compared to its peers of that console generation, or the mammoth amount of Wii’s sold over the past five years or so (enough to keep Nintendo in caviar and champagne for a good while yet, I’d imagine). Were it not for the shrewd move of buying up the rights to what was at the time a fairly unassuming, unimaginative (and ropey) looking third person strategy title and pushing to get it transformed into the first-person shooter we all know and love today, Microsoft’s fortunes in the home console business might have been dramatically different.

The rest is of course, as they say, history. After two direct sequels, a “gaiden” tale that no one dares speak of, a prequel, a real-time strategy spin-off, a Combat Evolved remake and more books, comics and assorted types of other merchandise than you can shake an energy sword at under its belt, the Halo franchise means big business for Microsoft, which makes the announcement of a new title in the series a very big deal for all involved. But who exactly is involved with Halo has changed drastically from what we’ve all grown accustomed to since 2002. Bungie, the masterminds behind the whole franchise – its characters, the universe, its narrative and its very essence – has since jumped ship, ditching Microsoft to potentially repeat Infinity Ward’s mistakes with The Most Evil Corporation in the World™, Activision, and leaving Microsoft with the rights to a massive money-spinning behemoth of a property… and no one there to actually do anything with it.

Not one to let the opportunity for truckloads of cash to pass it by, Microsoft rectified the situation by forming 343 Industries, whose sole responsibility is – and shall remain – to handle all things Halo related. Cue the announcement of Halo 4 at E3 2011, which brought with it a tonne of excitement, anticipation and questions, many of which should be answered at Microsoft’s conference later today.

What we already know about Halo 4 is actually quite substantial, given that it’s still a good five months away from release. The events of the game take place several years after Halo 3. Adrift in space aboard the wreckage of the UNSC frigate Forward Unto Dawn, Master Chief and Cortana find themselves near a mysterious Forerunner planet, What transpires is being kept under wraps for now, but 343 Industries have revealed the plot will touch upon a number of things: humanity and the UNSC’s adaptation to the galaxy after the war with the Covenant ended and Cortana’s “rampancy” following her exposure to the Halo rings and operations beyond her natural lifespan (whatever that means; she’s an artificial intelligence, after all) among them.

The developers have also hinted that Halo 4’s campaign will focus less on standard first-person shooting staples and instead rely more on mystery, exploration and discovery. Whether this means that the small open-world and exploration elements of Halo 3: ODST will be expanded on even further and we’ll be able to fully explore a massive environment at will is still a mystery, but it’s an enticing prospect if nothing else. Halo 4 is also being touted as the first in a new trilogy, with Halo 5 set to be a much darker game in terms of story, before the trilogy concludes with Halo 6.

Multiplayer will naturally feature heavily in Halo 4, and now-genre staples will be making their way into what will almost certainly become the game’s most popular mode. Call of Duty-esque perks and killstreak rewards are set to appear, along with the Spartan customisation elements from Halo 3 and Halo: Reach. 343 Industries has also hinted that Halo 4’s multiplayer might even feature its own narrative that explains why teams of Spartans are feeling the need to blow each other to bits and shoot each other in the face. This could mean that Halo 4’s multiplayer matches could feature evolving objectives and on-the-fly mode changes, similar to what Rockstar recently dished out with Max Payne 3 multiplayer.

Whatever happens, there’s no denying that 343 Industries has some very big shoes to fill and that, subsequently, Halo 4 has a lot riding on it. Halo’s fans are as rabid and particular as they come; they know what they like, what they want and will be extremely vocal if they find what they deem to be faults in any facet of Halo 4, be they in its campaign or its multiplayer. Whether 343 Industries can do the Halo name justice and expand and improve upon what Bungie created is anyone’s guess right now. Hopefully, next week will provide more answers and give this new developer the chance to really show what it’s capable of.

If I may, I’d like to be brutally honest for a moment: the Kinect is, at this moment in time, a bit crap. There, I said it. If you don’t own a Wii – although with over 95 million of them out there, there’s a pretty good chance you do – then the Kinect and its inferior motion sensitivity and overly strict environmental requirements that include a massive living room, a one thousand watt bulb and shed loads of patience in no way presents an adequate or acceptable alternative for all your motion controlled gaming needs. Its library of games also leaves a lot to be desired, consisting almost exclusively of the kind of dancing games, minigame compilations, pet simulators and other assorted shovelware that Wii owners grew weary of three years ago.

This is a shame, because – while it might indeed have exposed a whole new group of consumers to the Xbox 360 – the core demographic that Microsoft has worked so hard to win over since the uphill struggle it faced with the Xbox circa 2002 just isn’t into that sort of stuff. Your average Call of Duty player doesn’t want to pet imaginary animals, no matter how impressively rendered their fur is, nor does he/she want to get up in front of his/her television and throw some shapes along to Lady Gaga.

Now, when Microsoft announced their entry into the home console market, millions of people scoffed at the prospect; “it’s a low-spec PC that weights several tonnes!”, we cried. “If Titanic had hit it instead of an iceberg, Titanic still would have sunk!”, I literally just thought of that, ten years too late. However, despite potential buyers needing to reinforce their floors before they bought it (sorry, I’ll stop now), Microsoft persevered and, despite relatively low sales, they ploughed money into securing some excellent third-party exclusives, brought out some cracking games of its own and the faithful few who did buy an Xbox while the PlayStation 2 sold by the planet-load were enough for Microsoft to get a foot in the door.

And, nine/ten years later, now that the Xbox 360 is flourishing so healthily – despite the disastrous “red ring of death” débâcle – Microsoft decides to bring out a motion controlled peripheral and concentrate on poaching Nintendo’s user base while neglecting the very people who helped get the Xbox brand to where it is today. That’s some real irony right there and – some might say – some downright ingratitude on Microsoft’s part.

So, I’ll get to the point. Microsoft: give the “core” gamers who have remained so faithful through the Xbox and Xbox 360’s highs and lows a reason to invest in a Kinect. We’ve already seen third-parties have a go at integrating Kinect features into high-profile games – Mass Effect 3‘s voice commands and Ghost Recon: Future Soldier’s Gunsmith motion control spring to mind – but where are the games that utilise Kinect to its fullest and provide totally unique and innovative experiences that wouldn’t be possible on a traditional controller?

I’d love to see Microsoft present a game at E3 that ticks all those boxes; one that pushes the boundaries of what we think a motion controlled game, or indeed any game, can be. And, let’s face it, if Microsoft themselves can’t accomplish such a feat, how the hell can we expect third-parties to follow suit?

If you’re anything like me, you have fond memories of GoldenEye, Perfect Dark, Jet Force Gemini, Banjo-Kazooie, Conker’s Bad Fur Day, Donkey Kong 64 and many other games that came from the Twycross-based studio, Rare, a company that was at the top of its game in the late Nineties and early Naughties. Then, a year or so after the turn of the Millennium, after we’d all gotten over the Millennium Bug scaremongering and that God-awful Robbie Williams song, Rare were bought out by Microsoft and from that point on everything went a bit pear shaped: we got a graphically superior Conker’s Bad Fur Day remake with all the best swearing cut out and the utterly forgettable Grabbed by the Ghoulies. Oh dear.

Things subsequent went from bad to worse for Rare after the Xbox 360 hit stores in 2005. An undeniably crap Perfect Dark prequel and the quite good but soon forgotten Kameo: Elements of Power both launched alongside the console, and with the exception of Banjo-Kazooie: Nuts & Bolts – a game that is absolutely excellent, will forever remain in my top five games of this console generation and yet sold bugger all – Rare’s output has been disappointing at best. However, rather than leave the studio alone to do what it does best, Microsoft twisted the knife even further into the hearts of Rare fans, relegating the studio to the “design Avatars and be our flagship Kinect developer” division.

All I ask, Microsoft, is that you get some other up and coming developer (who could probably really use the money) to sort out Kinect Sports 3 or whatever, and let Rare go off and do its own thing. Let them develop that Jet Force Gemini sequel I’ve been pining after for years, or the Banjo-Kazooie follow-up that the after-credits sequence in Nuts & Bolts alluded to nearly four years ago. Just leave them alone and allow them to flex their muscles, get those creative juices flowing and triumphantly return with a title that screams classic Rare, exuding the kind of creativity, imagination and flair that only Rare can muster. Please, think of the children!

One thought on “Pre-E3 Anticipation – Microsoft”