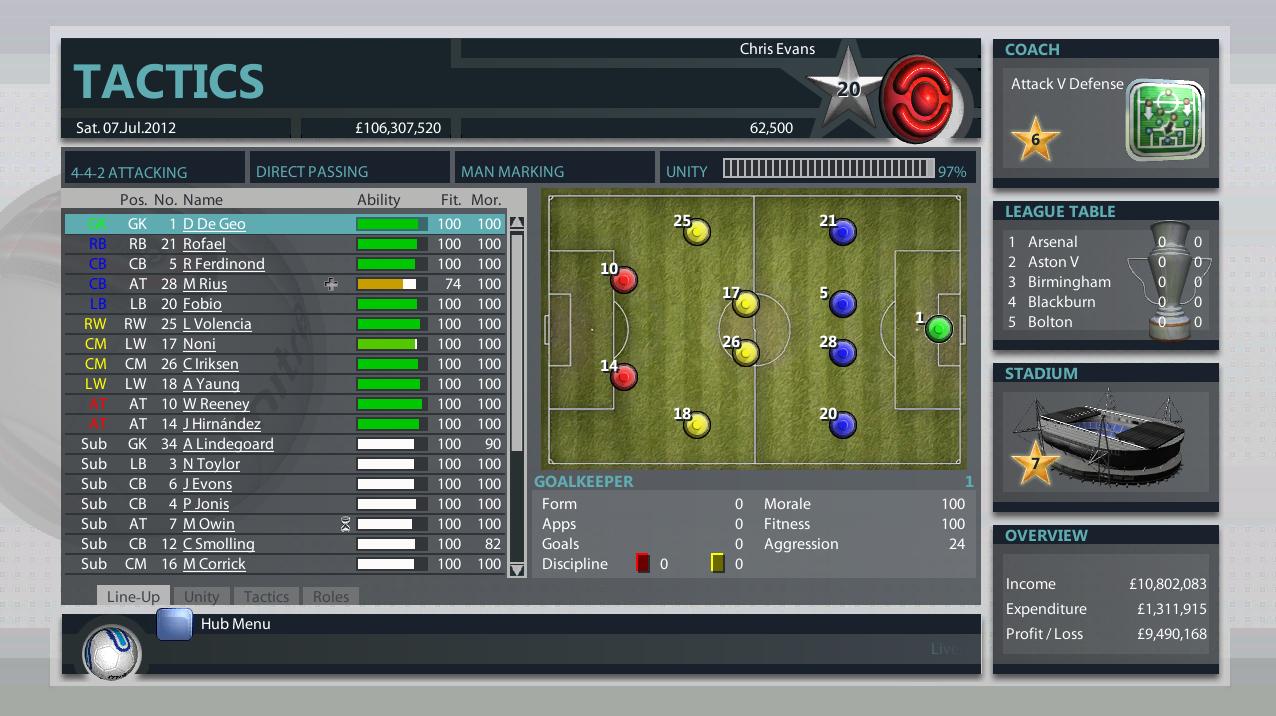 Premier Manager 2012 is not Football Manager, but it isn’t trying to be, instead it is a light, easy take on the football management genre. If you are scared of taking on the depth and challenge of Sports Interactive’s beast, this might be worth taking a look at, find out if it is after the jump.

Coming in at a sub £10 price point (amazon has it for £6.47) Premier Manager 2012 certainly is a budget title, and should be treated as such, I wouldn’t buy it expecting high end production values. Rather, look at it as an arcade management game. Despite the somewhat fiddly interface, it is easy enough to choose a team from one of the countries on offer and get started with the game. You will likely get lost at first with the interface, it isn’t slick and intuitive, which does take away from the ease of use. To view your squad from the home page requires opening the ‘Hub Menu’ then going to the My Club section under the Manager tab. From this new screen you can select Squad List to see your team.

Other bug bears around the interface crop up when searching for players to try and buy. On the player search screen, you are unable to search for a player by name, you are limited to applying various filters to manage the list. Did you then want to sort your list by players value, or by nationality? Sadly, not possible. It might come across that I really don’t like this game, but these are issues which do detract from a pleasant enough experience. A simple thing like being unable to undo a substitution if you changed you mind before restarting the match sounds obvious, but it isn’t in the game. Cue a whole host of substitutions gone wrong. Where Premier Manager excels is in letting you get on with picking a team and getting on with matches, you can very easily leave all the training to your coach. You can pick and choose your tactics from a variety of pre-set formations each with modifiers for attacking or defensive options, but there isn’t a lot of depth to the tactics. This isn’t all bad, especially as Premier Manager is aiming for a more casual footballing fan than other titles, it certainly makes setting up your team a simple task. When it comes to match day, you can get the game to simulate it without you having to get involved at all. If you are a bit more hands on you can watch the match in a screen which has a small 2D pitch, possession stats and player ratings. It is light, but serviceable. At times, your coach may pop up with some advice about changing tactics, a simple but effective way of guiding you to what needs to be done to win the match.

Post-match your board will give you feedback on the result and you earn XP for draws and wins, though it is not clear what impact your XP has on your in-game performance long term. A fun feature is the ability to build new stadiums and training grounds, you also have to repair your facilities from time to time to ensure they are kept up to scratch. It is a feature which adds a bit more to what can sometimes feel a fairly limited game.

Sadly, I can’t recommend really Premier Manager, it tries to offer a different experience to something like Football Manager and it does so, but the interface lets things down, and there isn’t enough depth to keep going after a season. At the budget price you can find Premier Manager for, it might be worth picking up to spend a couple of days on, just don’t expect it to be a Football Manager type of game.

Please see this page for more details on our scoring system.