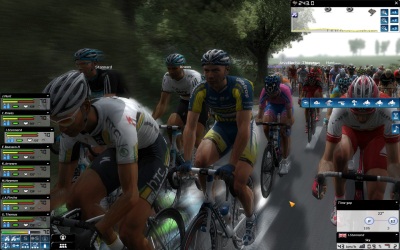 Cycling, in all honesty it isn’t really everybody’s cup of tea and its’ reputation isn’t enhanced by the constant doping allegations. Fortunately then, I am a bit of a fan of cycling, of course that doesn’t mean that I actually ride my bike, don’t be stupid. It simply means that I like to keep myself abreast of the latest developments in the sport and I know the basics of what goes on.

Naturally as a cycling fan and a bit of nerd when it comes to management games, I would take a look at the latest edition of Pro Cycling Manager. A bit of backstory is needed here, my love-affair with the game started a few years ago when I was at PC Zone for work experience. While there I played and reviewed the 2008 version of the game. I gave that edition of the game a 50/100, whilst I enjoyed the fundamental basics of the game, it was let down by such a poor interface, both in the management aspect and the in-race aspect, that I just couldn’t bring myself to give it a good rating. So after sitting it out for a couple of years I have come back to the fold and have cast my eye over the 2011 edition of the game. The release is timed to perfection, with the Tour de France just a week away there is a lot of mainstream coverage of the sport in the UK. That is not to mention the expectation of a good showing from Mark Cavendish in the sprints and Bradley Wiggins and Team Sky to perform well overall. With a growing British presence in the Tour and the increased media coverage of the sport, there is a chance that Pro Cycling Manager will manage to grab the attention of a wider audience.

Back to the game at hand, first up I will say that I was pleasantly surprised to see the clean bright looking user interface in the management aspect of the game, and even more pleasing, during the 3D races things are much better as well. It only lets itself down when you see the faces of the people driving the cars that accompany the riders, I honestly thought I had seen an alien when I saw one of those chaps. The good news is that the riders and the environment look much better than I expected, it isn’t anywhere near the quality of something like FIFA, but you are able to watch the race unfold without being desperate to quit because of the graphics. Just avoid looking at the people in the cars if you can. The whole point of doing a race in 3D is so you can micromanage your team of riders which is at first quite tricky, and would certainly be made easier by the inclusion of a tutorial to explain what everything does. Another point which puts me off racing in 3D more regularly is the lack of strategic insight, you can’t easily get a feeling for where your opponents are in the peloton which in turn makes it difficult to plan when to tell your riders to launch an attack.

The heart of the action for long-term interest lies in the Career mode, here you can take control of any of the teams in the top two levels of professional cycling, you will see the likes of Team Sky, HTC-Columbia and Team Radioshack available. What is a bit disappointing is that not every team or rider is fully licenced, either that or the spelling got lost in translation from French developers Cyanide Studios (the team behind Blood Bowl believe it or not) so you can end up with someone like David Mullar in your team. It is a bit off-putting to think that one of your riders is named after a leading yoghurt brand.

You are also able to create your own team which is the route I took with my team ‘What a Shame’. In this way you are able to choose all your own riders along with a home nation. The idea is that your sponsor will expect you to hire riders from your home nation and focus on performing well in any events that take place there. As my team is British this means that the sponsor should in theory place a high priority on performing well in the Tour of Britain in September while having a lesser focus on other events in places like Japan or Qatar. Further, when creating my team I was placed in the lower of the two categories on the Continental Tour. As such What a Shame does not automatically get invited to prestigious events like the Tour de France or the Giro d’Italia, I have to apply for a wild card. This is a hit and miss process, and unfortunately I wasn’t successful in getting a wild card for these events. However, my sponsor had classed performing well in them as being a very high priority. This is where the problems with the management side of things start to emerge. As a Continental team without guaranteed entry to these top events my sponsor shouldn’t really be expecting a top 5 placement overall, and when I get rejected the objective should be changed for another event. In the game this doesn’t happy and you will find yourself getting a nasty black cross next to the goal on your sponsor screen.

Further, there is a lack of depth to many aspects of the management experience. Sponsor confidence in your performance is shown by a (excuse me if I get the colour wrong, I am slightly colourblind) yellow bar which gets longer or shorter to indicate their satisfaction in your performance. When you try to find more details on the sponsor screen you simply get more bars for Results, Registered Riders and Squad. In order to fully please your sponsor you need more feedback than this limited amount.

Indeed, it is the lack of detail which holds the entire game back, while I thoroughly enjoy the premise of managing your own cycling team and have had plenty of fun, I see so much room for improvement. Take the finances, you get a report which lists your travelling expenses, wages and prize money from different events. What you don’t get is any detail in where the prize money is coming from, is it coming from earnings in the sprints or for the stage win, or are you getting the prize money for your overall performance in the event? If so, you should be able to see how much you got for rider position, team position and such like. Your messages could do with being given more detail, after an event I want to see a breakdown of how all my riders performed and where they finished, how many points were earned for the rankings and their level of fitness. There needs to be more control over your riders during a stage if you aren’t watching it in 3D. You are able to choose their equipment and give them pre-race orders, but while receiving a detailed race report you should be able to tell different riders to attack or support their leader depending on how they are performing. Post-race reports are often nonsensical, one stage your team might get criticised for not doing enough to help the peloton catch a breakaway while other times you will receive a report saying that you didn’t do enough to help the breakaway stay away. The change in tone is frankly baffling.

You can throw a lot of criticisms at the game and a lot of them are well deserved, to be presented as a management game, there is a lot of detail and interaction which is lacking. It can be compared to something like Championship Manager 3 in some aspects because of the lack of meat to the bones.

Despite all of this, I do enjoy the game, I just wish there was more to it. I am just about going to give it a verdict of On Target. It is a brave developer to create a game with what I can only imagine is such a niche appeal and for that I applaud Cyanide. I hope that the game sells well on the back of a resurgent British interest in the sport and they can do the management side of things true justice next year.