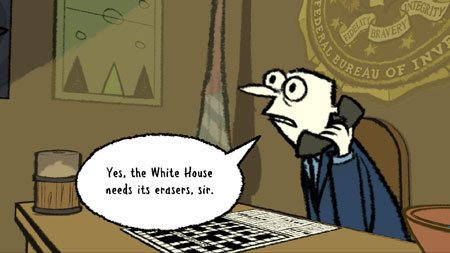 Puzzle Agent has to be one of the most aptly named games around. The premise is as simple as it is absurd, Nathan Tethers of the FBI’s puzzle division is sent out to investigate the closing down of an eraser factory in the fictional town of Scoggins.

To get to the bottom of the case Tethers must solve puzzles, riddles, conundrums and every type of brainteaser imaginable. The puzzles on show are as tricky as they are varied, one second you’ll be tested with a simple jigsaw and the next you’ll be plotting a football pass through a maze of glass panes.

Tying all the puzzles together is a simple point and click adventure mechanic. It’s real basic stuff, just going where Tether’s suggests and questioning everyone who is there. This point and click element is merely a framework to deliver the puzzles.

Each puzzle has been well designed and are distinct enough from each other to keep you entertained for hours. At times though some of the puzzles don’t seem to relate to the story. A few of them seem have been created in isolation from the storyline altogether and just had a flimsy pretence added to them to make them seem relevant. One requires you to rotate sections of a picture to reveal a rubber band among tapeworms in a man’s stomach before you can even talk to him. This doesn’t detract from the overall narrative of the game though. A wonderfully dark tale full of intrigue and mystery. The town of Scoggins is full of interesting characters, some seem to despise Tethers as soon as he arrives, others have been driven crazy by puzzles and the whispers of the “hidden people.” Through the game the story of these hidden people is slowly unravelled, providing some unexpected and even scary revelations. There is a really sinister undertone from the start of the game which contrasts with the vibrant hand drawn artwork.

Aesthetically Puzzle Agent is unusual yet pleasing. The hand drawn visuals create a fuzzy outline to the characters that adds to the sense of mystery in Scoggins. It can become overbearing when the camera zooms in on faces or objects though and there are times when Puzzle Agent just looks ugly. Despite these minor flaws, the visuals really add to the game. They convey a sense of charm and provide an interesting counterpoint to the dark story. Puzzle Agent seems like a puzzle in itself, a series of paradoxes countering each other to provide an intriguing experience. There are a lot of aspects that don’t seem to mix as well as you’d expect, yet somehow the overall experience still manages to feel extremely tight. At its core though this is a puzzle game in the truest sense of the word and there are times when you’ll be stuck scratching your head for hours on end.

Sadly there are one or two puzzles where this is more down to poor wording or explanation of the puzzle itself. Even though these instances are extremely rare they are a real frustration and the only major problem in what is otherwise a great game.

A sequel, the aptly titled Puzzle Agent 2, has just been released on PC and Mac and will be coupled with a free copy of the first game. The second game will continue from the cliffhanger ending of the first and delve even deeper into the mysterious town of Scoggins. Hopefully the puzzles will be as varied as before and the minor issues present in the first game will be fixed. Either way if you are a fan of having to tax your brain, then Puzzle Agent is for you.