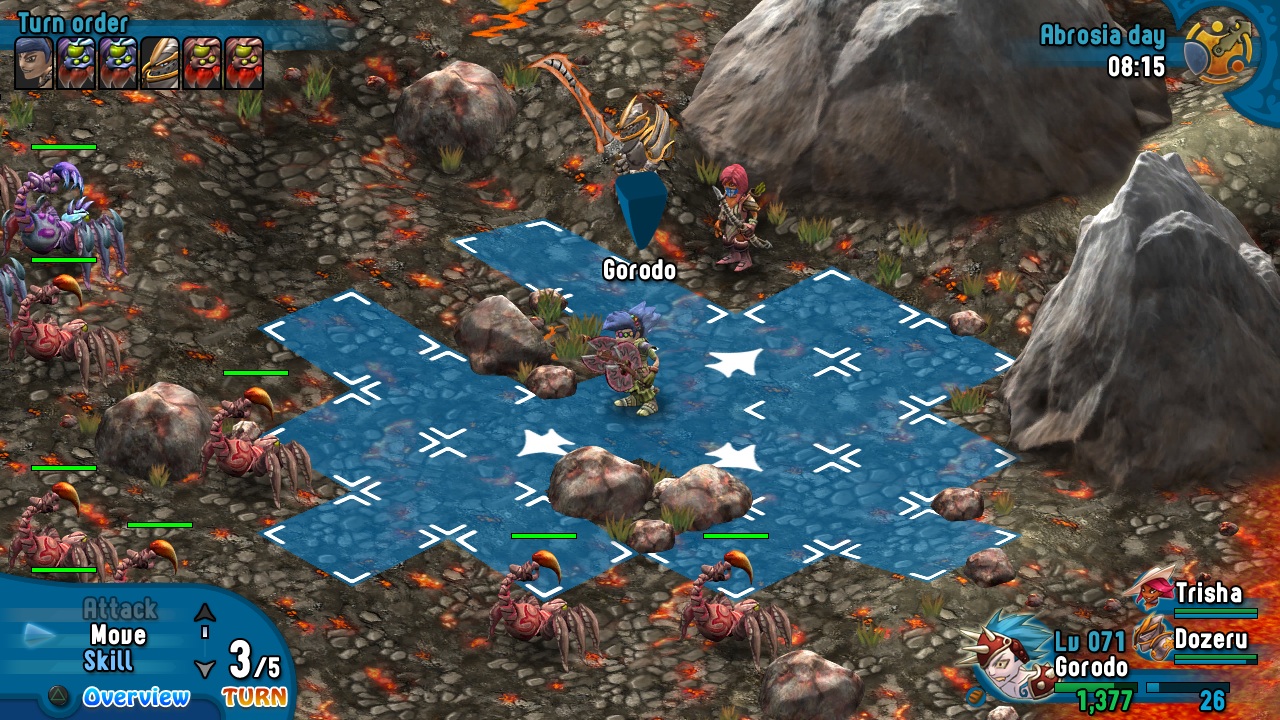 Rainbow Moon has been described by many as an hardcore old-school RPG. When a game is described as hardcore it is meant to signify that the game is a complex and requires a sizeable amount of time and practice to fully master. This is far from the truth with Rainbow Moon, an ultimately shallow game stretched out for so long that it requires immense dedication and patience to complete.

Rainbow Moon can also only be described as old-school due to its lack of story. Baldren, the game’s protagonist has been teleported from his world to Rainbow Moon and has to find his way back home. A simple storyline can be made interesting though with engaging characters. However between them Baldren, the additional fighters that can be recruited and the NPCs have the personality and depth of a particularly dull rock. Through the entirety of this 40+ hour game there is no character arc, not one character shows any motivation beyond wanting to fight or helping Baldren.

This is indicative of the game as a whole. Rainbow Moon is a strategic RPG similar to Final Fantasy Tactics and the Disgaea series, but with a focus on quicker battles. Up to three characters can fight up to over 20 enemies at a time, taking turns to attack based on their speed stat. Both the playable characters and enemies have a set class based on which weapon they have equipped, and each class is vulnerable and effective against one other. For example, swords are weak to magic but deal extra damage to bows.

This rock, paper, scissor like tactic can be largely ignored though because the enemy AI is laughably single-minded. A golem will relentlessly attempt to attack the weakest character on the map, even if that character keeps walking out of reach while the others attack it. Early battles can be easily won by using a character with strong defence to draw out enemies and attacking from long range with the other characters.

At the beginning of the game only fights against enemies of a much higher level cause any difficulty. Later, with the introduction of one-hit kills and status effects things become more challenging. There are no real ramifications for losing a battle though, the party just resurrects itself, at the point just before the battle, with 1HP. The abundance of healers, savants (NPCs that exchange Rainbow Pearls for stat increases) and shops in dungeons also means that getting back to full health is as little a problem as possible.

It’s at this point that the true core of Rainbow Moon becomes apparent — grinding. Enemies progress at a much faster rate than is possible without excessive grinding, so progressing through the game becomes an impossibility without setting aside an hour every now and then just to kill a few hundred enemies. This pain is lessened somewhat due to the game’s curious mix of battles that can be initiated by walking into on-screen enemies and semi-random encounters, which appear as a pop-up menu which can be accepted or rejected.

Another interesting feature is the character progression. Instead of just levelling up through the experience points that are rewarded after battle, characters also get Rainbow Pearls based on how many of the enemies they killed. These can be exchanged for stat increases. In theory this should encourage the player to balance their team, instead it just led me to an over-reliance on one character.

Coins, the game’s other currency, are also usually dropped during battles. These can be used to purchase new armour, potions and weapons at one of the many shops. As well as stat boosts, the armour and weapons also offer a new look for each character, though these are often so subtle that they are unnoticeable. Which is strange, considering how much effort has gone into creating the aesthetic of the game.

It’s not unreasonable to say that the visuals are the star of the show here. The cartoony looks and vibrant colours make the game beautiful to look at, and the level of detail is remarkable. Flowers sway believably in the wind, grass merges seamlessly into desert and water flows around floating rafts.

Conversely, Rainbow Moon‘s biggest weakness is its much-touted 40+ hours of gameplay. There simply isn’t enough content to fill that length of time. Quests are relentlessly padded out; it’s impossible to go from one objective to another without speaking to five NPCs, each telling you to talk to another for no purpose except to artificially extend the game length. The battle system lacks the complexity to make the necessary grinding anything but tedious. Even the aesthetic of the game becomes repetitive, with about five types of enemies and their palette swaps making up 90% of all the battles.

Everything about the game has a sense of mindless monotony which, while it can be cathartic and is absolutely brilliant for anyone stuck in bed with a cold wanting to mindlessly pass the time, becomes stagnant very quickly. The only real reason to play through to the end is to validate the time wasted at the beginning.

Please read this post for more details on our scoring system.