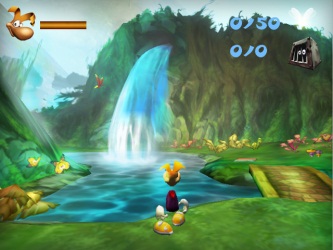 You’ve got to hand it to Ubisoft; in what has to be some kind of record-breaking attempt at all-out stubbornness, they just will not let go of Rayman 2: The Great Escape. Since its release in 1999, the first 3D platformer starring the French publisher’s gormless and limbless character has appeared on and/or been ported to the Nintendo 64, PC, Dreamcast, PlayStation, PlayStation 2, PlayStation Network, Nintendo DS, iPod Touch and iPhone. Off the top of my head, I can’t think of another videogame that has appeared on so many gaming formats over such a long period of time in more or less the same form and I’m in two minds as to why this is. On the one hand, the game must be doing something right if Ubisoft sees fit to continue releasing the same game each time a new console hits the market; after all, if the game wasn’t raking in the money and (presumably) still garnering a certain level of critical acclaim even after 12 years, then surely Ubisoft would have given up on it by now? Or, as is possibly a more likely explanation depending on who you talk to, Ubisoft is still clinging onto Rayman 2’s status as one of the rare top-tier non-Nintendo 3D platformers and sees it as a quick and easy sure-fire way to get a previously well-received game onto the market upon a new console’s release in the hopes that it will bring in a quick buck. Whatever the case may be, Ubisoft has once again brought Rayman 2 to the masses, this time in the form of Rayman 3D on the Nintendo 3DS.

The first thing that is immediately apparent when booting up Rayman 3D is that this is a game that’s in dire need of a visual makeover if Ubisoft plans to continue force-feeding it to gamers. Rayman 3D is apparently a port of the Dreamcast version of Rayman 2, which was a little jarring for me because nostalgia has been assuring me for some time now that Dreamcast games looked a lot better than Rayman 3D does. Environments – although vibrant and colourful for the most part – are blocky, barren and devoid of any little visual flourishes save for the odd flower and tuft of grass. Likewise, textures are basic; perfectly acceptable from a distance but lacking detail when viewed up close. Where Rayman 3D still shines though is in the animation of Rayman himself. His running, jumping and climbing animations are still fluid, ooze character and are made all the more charming by his distinct lack of limbs; watching him go about his platforming business is still a joy to behold even if the rest of the game isn’t exactly easy on the eyes. However, there is one important area where Rayman 3D struggles when compared to today’s games: gameplay. That’s not to say that it’s bad per se, but it’s too much of a mixed bag in terms of quality and while the good bits just about outweigh the bad, those bad bits are glaringly apparent as being old, tired game mechanics that could have done with being taken out completely if I’m being honest. The core focus of Rayman 3D – the platforming – is still top notch. Thanks to the 3DS’ circular analogue pad, Rayman controls tightly and incidents where I accidentally fell off a platform and to my death or misjudged a jump were thankfully kept to a bare minimum, especially when compared to the Rayman 2 port on the original DS; the idea of asking players to control a character with a d-pad in a game where precision jumping and moving along narrow platforms are the order of the day is one that I personally find catastrophically stupid. Luckily Rayman 3D suffers from no such problem in terms of how Rayman moves and feels; although that problem with untimely deaths can crop up by other means (more on that later).

Unfortunately the other things accompanying the core platforming fall utterly flat. They mostly involve on-rails sequences – such as waterskiing while being dragged along by some kind of snake thing – or bits where you fly around on a rocket and are almost universally awful because for some reason that completely escapes me, the sheer fluidity of Rayman’s movement is defenestrated and he slides around like a KY Jelly-smeared eel on a floor made of butter in the on-rails sequences and the camera is so utterly awful when flying around that some sequences had me dying and retrying a good thirty or so times before I finally beat them.

Speaking of the camera, Rayman 3D stumbles in this area on more than a few occasions other than those I previously mentioned and found me meeting my maker on a few occasions. This is mainly down to the fact that the only control you have over where the camera is pointing is a quick tap of the left shoulder button, which centres the view behind Rayman. There’s no other option to rotate your view to get a better view of what’s going on and I find this inexcusable; the 3DS may lack another analogue pad for camera control but the touch screen would be more than capable of performing that same function. As it stands, when playing Rayman 3D the 3DS’ touch screen is never used and is relegated to simply displaying information on what you’ve collected in each level. Although on the plus side, this does mean that the top screen is uncluttered and this goes some way to keeping your view unobstructed, even if the camera has other ideas. Now, I don’t have anything against developers remaking classic games, providing it’s done right. There are certain things in games that age well and certain things that don’t and Rayman 3D is one of those games that’s difficult to recommend because it hasn’t aged well at all; things have moved on a lot in the last 12 years and unfortunately most of what makes up Rayman 3D is needlessly irritating and archaic. Things are only made worse when you take its tired visuals into account and while it was a great game in its day I think it’s time that Ubisoft finally put Rayman 2 to rest and either concentrate on getting a new Rayman adventure out there or at least bring back the far superior Rayman 3: Hoodlum Havoc. Whether you played Rayman 2: The Great Escape back in 1999, have played any of the many ports since then or have never played it at all, you probably won’t get an awful lot of enjoyment out of Rayman 3D in this day and age.