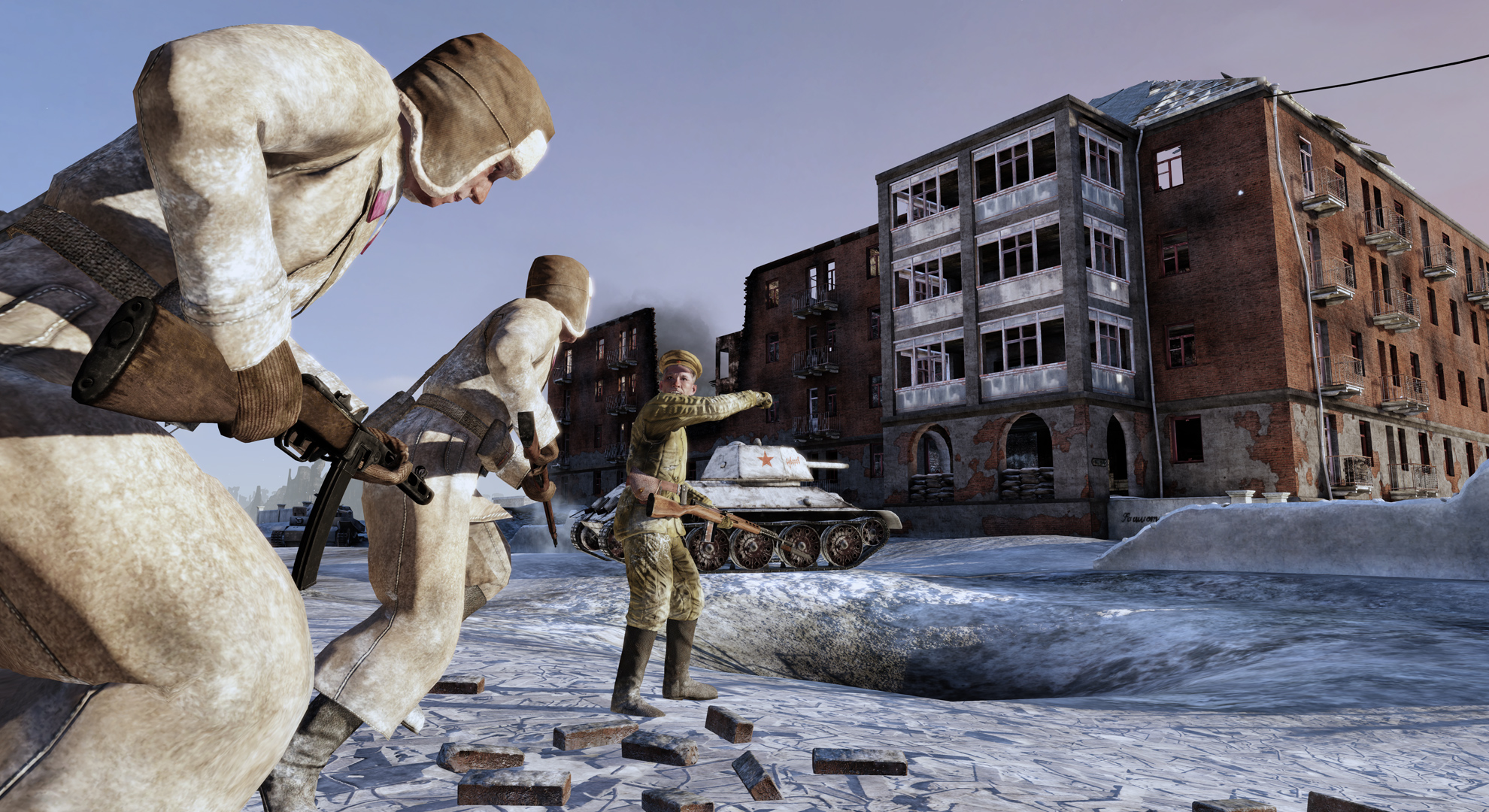 A few of us have been playing Red Orchestra 2: Heroes of Stalingrad over the past week, some with more success than others I must say. Here we are then to present our initial thoughts on the gritty World War Two shooter. I’ll be up front and honest, my first impressions were very poor. I experienced major performance issues, the stat tracking system was initially broken and the singleplayer AI is, to be kind, a bit shit. These are by no means game destroying, but they do cast a cloud over the it in my mind. I know Tripwire are working furiously to sort the issues out, but part of me wonders how many people might be turned away from the game for good thanks to these issues.

Another problem is the skill level of the vast majority of the people you face online, there was a fairly lengthy beta period for people who pre-ordered, and I am sure that those people who took part in the beta have such a greater level of game knowledge that it makes things difficult for new players to come in and settle.

I will suggest you avoid the single-player campaign, I honestly preferred what passed for a singleplayer campaign in Battlefield 1942, at least there the AI was able to move towards the action rather than walking in circles. The only worth while aspect of the campaign that I can see is the tutorials which will teach you some of the finer details of the game which may help you out in multiplayer.

Despite these problems I have stuck with the game, and when I look beyond the problems, I see a very good multiplayer shooter hiding. It isn’t an easy game, and as such it is very refreshing compared to some of the droll we see being released at the moment. Hopefully Tripwire are able to get the issues resolved before the community fades away. Myself? I’m going to keep at it, I feel that soon enough this game will really start to shine. My first experience of Red Orchestra 2 (other than a very brief look at the single-player) involved me, a gun, another dude and what is known as a ‘TK’. More precisely, it involved me accidentally shooting someone on my team with a large machinegun as I dumbly failed to recognise that he was wearing the drab brown of the Russian soldiers, rather than the drab green of the Axis. Five seconds after that, I was killed by another member of my own team. Initially I presumed this was as retribution for my own folly, before a glance at the scoreboard told me that it was actually a griefer – taking pleasure in purposefully spoiling the game. So, lesson number one – friendly fire is back. Friendly fire is anything but.

In the next match, I decided that running ahead of everyone else on my team would put me in a position where my own allies are less likely to be milling around in front of my iron sights and that I’d be a safer proposition for my teammates taking point. My death was swift and inglorious, I was picked off quickly by a crack of rifle fire. The spawn timer counted down slowly from eighteen to zero and by the time I was back in the game, my compatriots had taken cover in sensible positions and were exchanging fire with our opponent. Lesson two – spawn timers are long and every death is felt when trying to secure an objective. Running forward in a bloodthirsty rage is no substitute for clever positioning and tactical awareness of the battlefield.

Eventually I got to grips with the game after a few matches and started to have a positive impact for my team. Although I could lament the lack of teamwork at times, I was having quite a bit of success in flanking enemy positions and carefully moving myself around to set up lines of fire at important choke points. At one point I was even leading the scoreboard, having taken on the role of the elite rifleman. The one hit kill nature of battles is rather satisfying, if your enemy has their back to you, you can sit for a moment coldly calculating when to take the shot. Unfortunately at this point I experienced a crash to desktop.

It’s worth noting my performance generally was actually quite smooth, I was lucky enough not to experience the stuttering and bugginess others have encountered and I wasn’t running the game on anything resembling a ninja-performance PC. But ultimately – Lesson Three is that I can sense a thrilling and tense shooter in RO2. There are learning curves to overcome and bugs to endure, but if Tripwire can polish the game up to a higher standard, then it may just offer a tantalisingly different proposition from the more arcadey shooters currently flooding the market. In theory, I’ve had a lot of experience with Red Orchestra. I played the original UT mod years ago and dabbled in the first standalone Red Orchestra during it’s many free weekends. But admittedly, I never truly ‘got’ it. So it was with some trepidation that I booted up Red Orchestra 2, as I wasn’t sure entirely whether the game would be a little more accessible this time.

It started promisingly enough with the single player mode offering me a tutorial, which I jumped at the opportunity to take. And sure enough I found myself on a training field being shown, alongside the usual basic movement controls of most FPS, some of the little details that define Red Orchestra’s identity – having to adjust the iron sights for distance, taking wind and gravity into consideration when making a shot, not being able to rely on a HUD to tell me how much ammo I had left. All things the game definitely deserve it’s standing with it’s own community, showing it’s a game with more teeth and far more smarts than your average shooter.

Sadly, my fears were realised soon after, as it dumped me into the first single player mission. The game told me I had to capture certain areas, but gave me no indication how in terms of the game to do so. The HUD was telling me something, but I had no idea quite what it represented. The map sure was gritty, and felt more organic than a lot of shooter maps, and the cover mechanic seem to work quite well, but I was struggling to work out exactly how well I was doing – the ends of rounds and victory seemed to almost come out of nowhere. Red Orchestra 2 is still a game that is incredibly difficult to penetrate into the mind of the casual gamer.

However, a couple of multiplayer games later, and I could start seeing the light behind the cracks. The difficulty may be tough, but it makes it all the more worth something when you do achieve victory. Kills aren’t some cheap score tally in this game, they’re a mark of how skilled you are versus your opponent. Tense standoffs are common place, and when faced against a good opponent, it can come down to who wastes the least of their precious ammo to make the one successful shot before you need to resupply. It’s a fragile balance – almost literally – but it’s one that Red Orchestra gets right for those wanting something a bit more than a casual shooter.

It’s still early days, but I’m starting to see the appeal of Red Orchestra 2. It’s certainly a tough nut to crack, but for those who persevere with it, there’s a great game underneath – although it’s certainly not for everybody.

Dan Ellis also received a review copy of the game, but due to technical issues he was unable to run the game.