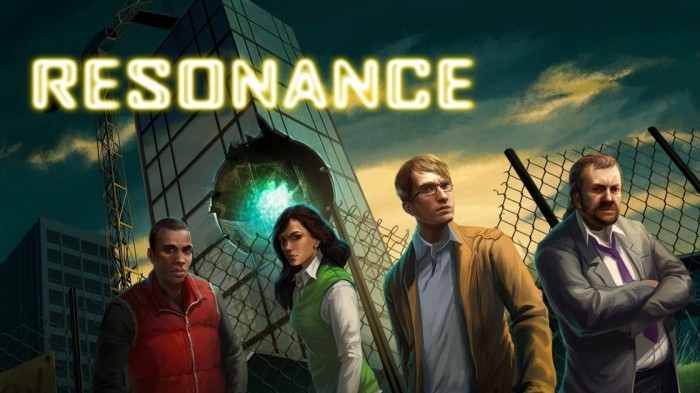 Since a quiet initial announcement back in 2008, XII Games have spent the past four years busily working away on Resonance, a thrilling point and click adventure. As its final release looms ever closer, I’ve been lucky enough to take a sneaky peek at what is to come, and you’re lucky enough to read about it.

When a particle physicist dies in mysterious, and I must say, quite spectacular circumstances, a small group of strangers find their lives curiously intertwined in a desperate search for the secrets he left behind. Intrigued? you will be.

In a manner reminiscent of Lucasarts’ Maniac Mansion and Zac McKraken, the game puts you in control of multiple protagonists, each with their own strengths and weaknesses that can be combined to work through difficult problems. By combining their various talents, there are few situations that cannot be overcome with a great deal of head scratching.

Over recent years, adventure games have been attempting to move away from the traditional inventory-mashing method of puzzle-solving. Whilst still asking you to pick up anything not nailed down, Resonance adds a surprisingly refreshing system of short and long-term memories to its repertoire. Want to ask somebody about an object in another room? Just drag it to your short term memory and take the idea of it with you. Whilst it takes a while to get used to, (often I ironically forgot to commit an item to memory) it’s an interesting addition to an age-old formula.

Some of the puzzles prove to be surprisingly complicated, which is a refreshing change of pace from the hand-holding of recent years. Occasionally you have the options of multiple pathways, which came as a welcome relief to someone who struggled for several minutes attempting to rewire a stubborn door.

Taking a leaf from Penumbra’s book, an element of physicality has been added to some interactions. Handles must be rotated by circling the mouse, levers must be pushed. It may seem like a simple addition, but in one memorable moment this simple mechanic manages to change what could have been a standard inventory interaction into a moment of jaw-dropping tension.

I can’t help but make comparisons with 2011’s hit adventure Gemini Rue. With full voice acting and artistic backgrounds, Resonance is certainly capable of standing proudly alongside its predecessor, and if the final quality continues at its current level, it might even surpass it. Whilst a release date is still unconfirmed, already Resonance is showing a great deal of promise. Although sticking close to the Lucasarts pattern, the author has introduced enough new mechanics to breathe new life into an age-old formula, and I’m definitely looking forward to the final release.