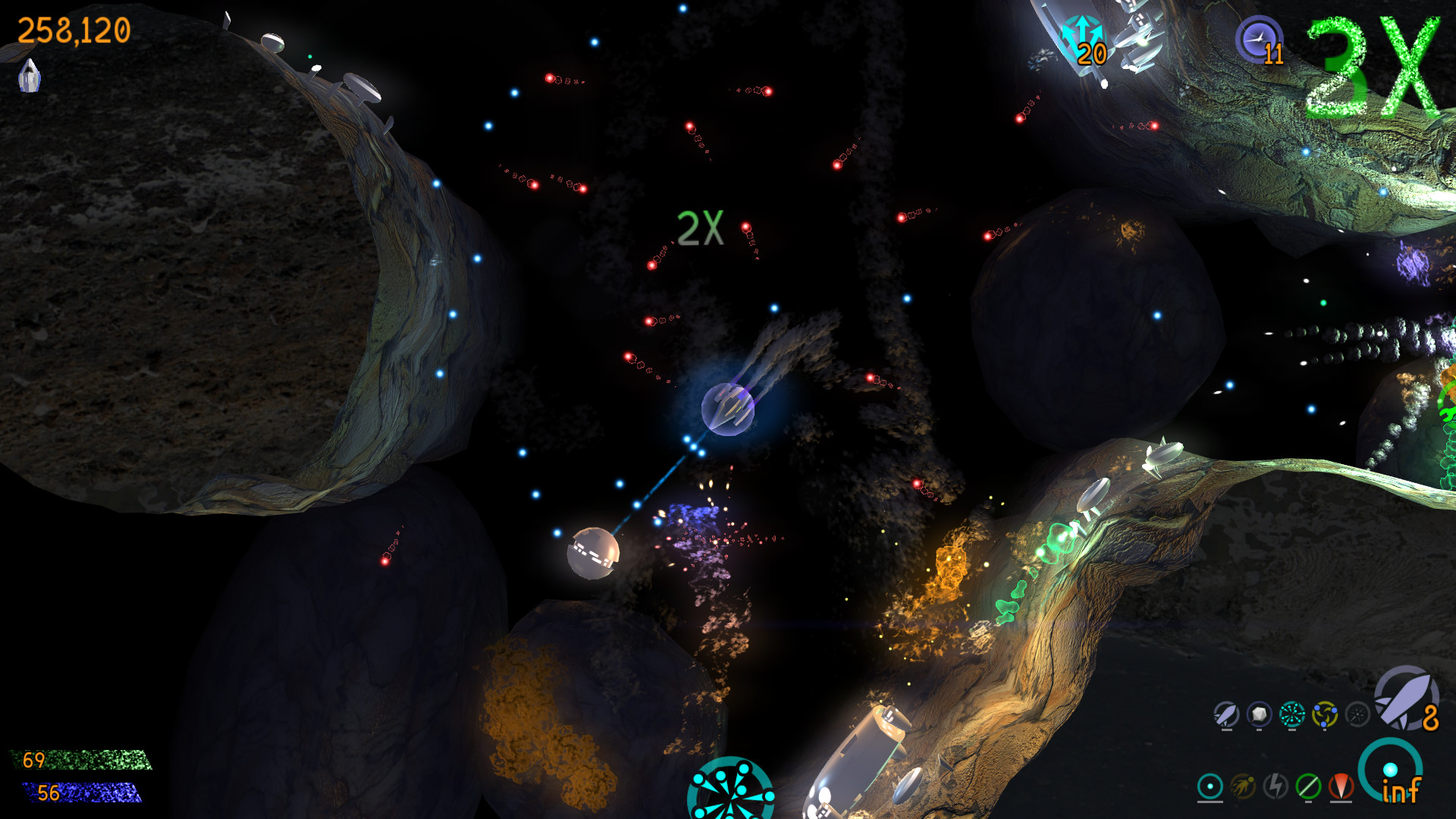 RetroBooster is an new indie title by ReallySlick where you pilot your ship around a number of levels trying to rescue survivors while avoiding/engaging an increasing alien threat. It is quite a pretty game, find out after the cut whether it lives up to the gorgeous visuals.

In RetroBooster you pilot a ship on one of the remaining human colonies, all other outposts have been destroyed by an invading alien presence. You’re tasked with simultaneously trying to save your own skin while also picking up as many survivors as possible.

I originally gained access to the title when it was still in early-access, but as it’s since been released, I am here to deliver my verdict.

The first thing that hits you is that it’s a really good looking game. The sreenies just don’t do it justice. The models, lighting and particle effects are all excellent. In particular, the way smoke and fire whirls as you fly through it is a thing to behold (and has killed me many times as I’ve crashed into walls trying to get a screenshot of it!). There’s a stylised feel to the visuals, and some of them, such as the models on the survivors may be placeholders but frankly I think they look great and wouldn’t want them to actually change. There’s a real charm in the way these people move and the whole ensemble comes together remarkably well.

The enemies, pleasingly, are fairly unique. Imagine if Rayman had a baby with a CyberDisk and you won’t be far off. Their standard attack is fairly easy to avoid- but in large numbers they can pose a challenge- they’re also constantly moving too adding an extra level of danger.

The levels are reasonably varied, given the design constraint (cave/tunnel rocket game), and again mostly gorgeous. It’s incredibly intricate to have 3D structures rotating against the plane of the game- such as giant cogs almost coming out of the screen. There’s a very clever play on perspective here and it adds a nice level of challenge (and visual spectacle).

There-too are levels that rotate completely around you and sections where exceptionally precise flying is required to get through narrow spaces. Puzzles of sorts appear too, but are usually just the button pressing to open a door, kind. On the whole though it’s a very cool set up.

The ship itself can be controlled via rotating along its axis, or by thrusting forward OR backwards. To be honest though, the reverse-thrust seems like an odd inclusion for me and unless there’s a level-specific reason for it I can’t fathom why it’s there. I may have used it once- it’s far more natural and intuitive just to rotate your ship and use the main thruster to change direction or slow down. This is a control scheme that’s been wired into us since the days of old titles like Asteroids so to mess with it seems odd.

This touches on the biggest issue with the game for me, the controls. Granted, you can re-map a lot of them (and you will, the defaults are mad), but the main way you rotate your ship is just really, really awkward to use for a mouse and keyboard. There is a blue laser-sight that extends out from the front of your ship, and it’s this that shows you which way your facing (and doubles as a way to distinguish foreground from background for piloting reasons). This laser makes orientating your ship against targets easy, or at least it would were the implementation of the controls not so wilfully difficult to use.

You see, moving the mouse doesn’t move you as you’d expect, by shifting the location of the target reticule (and thereby) the ship, rather the rotation acts like it is on some sort of gear linkage. It’s incredibly difficult to describe as i’ve never quite come across anything like it before. It’s taken a remarkably simple process and made it un-intuitive, difficult to control and frankly, maddening. Things are marginally better with a pad, but still- for a game requiring precision piloting, it’s an odd thing.  It nearly ruined the whole experience for me.

..nearly. That said, there’s just enough there that’s clever, interesting, gorgeous and just plainwell thought-out for me to still be interested in this title. If they can sort the controls out and refine some of the level design in a  later patch then I really  think this’ll be something worth cherishing.

Review on a Steam copy supplied by publisher. Please see this post for more on our scoring system