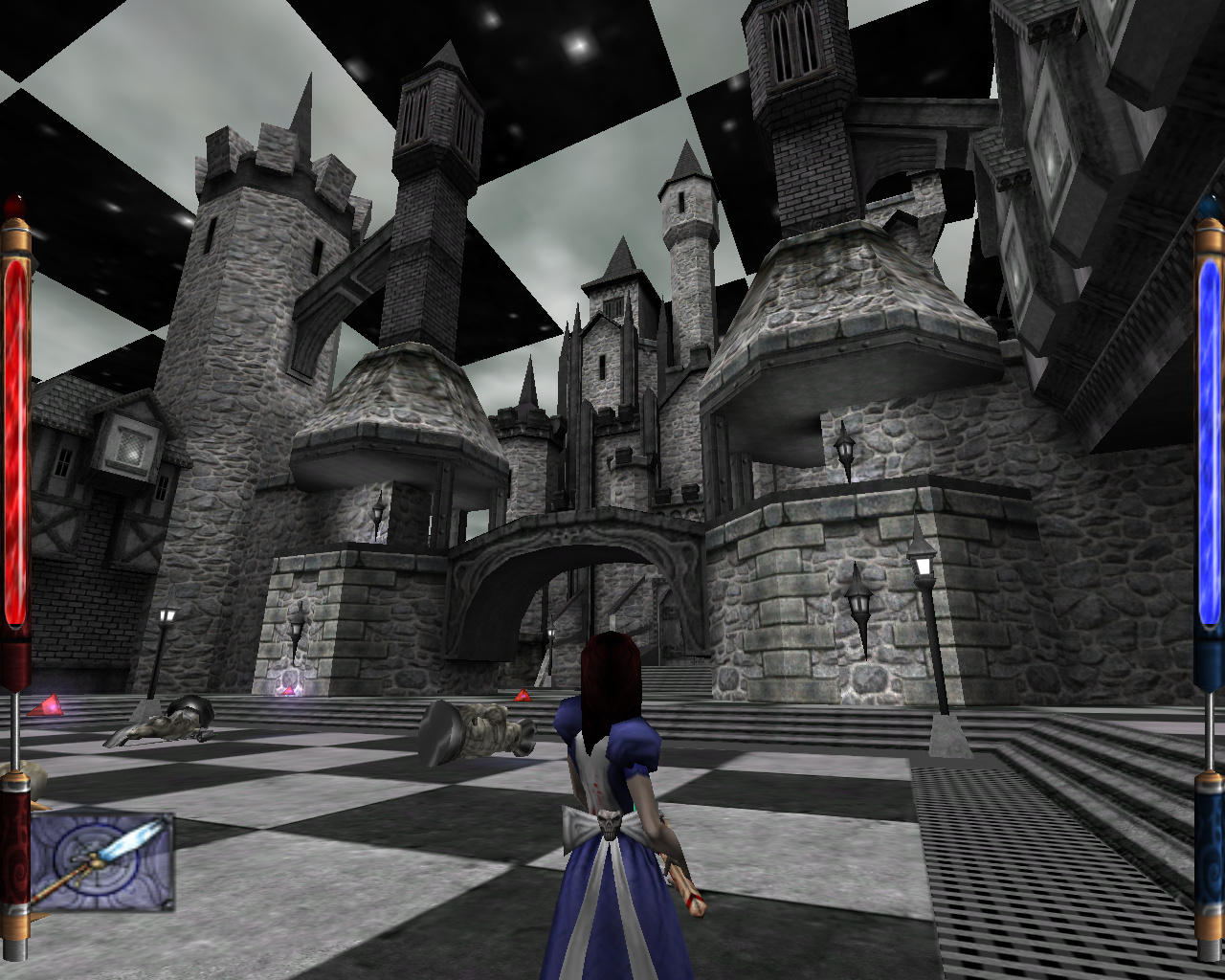 In the journalistic charter on retrospectives, there’s probably a clause that says you have to like the game you’re writing about. Especially considering that the reason for revisiting said games is nearly always as some pre-review content for an imminent title in need of those last two coffee cups of hype before showtime. That imminent title is Alice Madness Returns, a game with a title that will be covered by at least one British based games journalist with reference to the songs of a Pop/Ska group of questionable worth.

And the original game is, of course, American McGee’s Alice, a game with a title created in that short period of time when it was fashionable for ex-iD Software developers to pretend they were a marketable commodity (not that McGee didn’t carry on well past the point it was in vogue. This may be a bracketed sentence I repeat snarkily elsewhere). And yes, I’ve found myself visiting this game with a rather bitter taste in my mouth, trying to piece together the rationale for why eleven years later, this not-quite-the-oddity-it-thinks-it-is title is getting a sequel.

Returning to the hallowed charter of retrospectives (you may remember I made it up in the first paragraph) there’s probably a bit about how you’re supposed to have played the game before. You know, what with semantics and all. True to form, this is the first time I’ve played through the game and yes, this is doubtlessly at the root of why I can’t bring myself to enjoy the experience. It’s a fact that also robs this retrospective of much rose-tinted blathering, but if there’s a downside to that, I’m not sure what it is. Besides, I’m doing myself an injustice here. I’ve played enough of the games that Alice so clearly derived its chief mechanics from to create a kind of patchwork quilt of reminiscence. The very technology the game is built upon induces a sense of deja vu: everything from how the game handles sky through to the the way it renders and textures a box screams Quake III Arena at you. Perhaps it’s their growing sophistication (or perhaps it’s the fact that every damned action game uses Unreal Engine 3), but you just don’t get the same feeling of engine familiarity from modern game engines.

Of course, Alice doesn’t do itself any favours here. The weapons are standard FPS fare, though I struggle to think of a game that entrusts so much of its gameplay time to the throwing of grenades (especially not one with such gimpy physics). And the third person camera has that lumbering, impractical, ‘zoomed out first person’ feel that a lot of PC third-person shooters had at the time. The game never feels quite removed enough from the feel of the contemporary FPS, and at times its feels like a very enthusiastic mod given a full retail release. Even the jumping grunt that Alice makes sounds like a feminine variation on that distinctive Quake yell.

Then there’s the stuff that PC gaming has weened itself off all too gradually, mechanics and conventions that will be mourned only by the select few. Thanks to autosaves triggering only at level-loads, quicksaves are the only way to assure your sanity in Wonderland. Playing the game on its ‘hard’ setting had me falling into old habits fast. Down one enemy, hide, quicksave. Repeat till enemy group is dead (considering quicksave is bound to F1, it’s probably not much of a stretch to suggest that this is actually how it was designed). The AI is only as good as it needs to be, the combat built upon the simple run, hack, slash and throw that was only borderline acceptable at the turn of the millenium. Health / ammunition refills are particularly poorly thought out, since you almost exclusively get them from downed enemies. Since you only lose health and ammo if you fight, and some enemies are actually quite easy to run straight past, there’s often no incentive to engage in the fighting. You’re often caught with zero ammunition because a tough enemy gets downed on some unreachable ledge.

But surely all this technical, mechanical stuff is rather besides the point? We know we don’t miss that stuff. The interest in American McGee’s Alice lies in its aesthetic, its twist on Lewis Caroll’s famous and internationally adored tale. You can’t really take that away from the game, and it still remains a great idea for exploitation (and improvement. Vast improvement) in Madness Returns. But it’s difficult to give the game too much credit for an idea it never really follows through on all that expertly.

For starters, all that technical, mechanical stuff still draws you out of the experience. Alice is a game in love with the fact it can tell a story, at a time where games generally shyed away from doing so. But it’s a story it tells incoherently, with camera swings and narrative techniques that are typically more primitive than the game seems willing to acknowledge, drawn out with complete Nali Castle-esque banality. Is it too cheap a shot to point out that the voice-acting is exactly as accomplished as you’d expect of a game contemporary to Deus Ex? Probably. Just like that pillar of PC gaming, Alice is at its absolute worst when everyone is putting on an accent. Unlike Deus Ex, the entire game is one long cavalcade of terrible faux-British accents. An experience in late 90s FPS games pays dividends in dislike for the game. An Alice in Wonderland full of bloody pinafores set in gothic fortresses with fire and brimstone, that dabbles in psychedelica isn’t exactly a million miles away from the common aesthetic of the time (and considering McGee’s pedigree was Doom and Quake, you wonder if he was trying at all). The Alice mythology lends itself rather precisely to being a compilation of late 90s modding tricks: levels where you’re tiny, levels with upscale backdrops, swirling vortexes of clocks and detritus, moments of escher-like design and halls of mirrors. The best of it all is like the later missions of Thief: The Dark Project with the tension lobotomised by the irritating and repetitive Psycho-esque stings of the soundtrack.

And whilst the whole ‘gothic’ aesthetic is a great spin on Alice in Wonderland in theory, in amongst all these bad mechanics and the risible dialogue, it comes across as a substitute for the genuine wit of the original work. The Alice we’re promised in the opening is a dark and serious young woman, losing her grip on reality, yet we’re ultimately presented with Nemi with a knife, a one liner machine with all the personality of a Doom marine. The characterisation just generally feels uncomfortably retrofitted to reflect a) Alice’s relative maturity and b) the gothic theme. This means long exchanges with the Cheshire Cat which drop regular and bad sassy puns on the first count, and the occasional shaded reference to stabbing on the other. Alice’s presence in Wonderland never seems convincing as a psychological state, the whole experience never seems like much more than a mild irritation to her.

But none of this works against the prospect of a sequel. The Gothic FPS is long dead, and you’d assume that Spicy Horse will have the sense to update the gameplay here. And that Gothic setting is still an alluring idea, the recent ‘Alice in Timburtonland’ probably being a factor in the seemingly random resurrection of this ageing PC game. Madness Returns doesn’t really have to be burdened with this particular blast from the past. The main point of association will be Caroll’s original and any embellishments from McGee’s first hack-job can be easily summarised. Everything that held the first back should surely be absent, and judging from the apparent visual splendour of pre-release screens, we could actually be in for something special. Well. That’s assuming that a decade of critically panned American McGee titles don’t count against it.