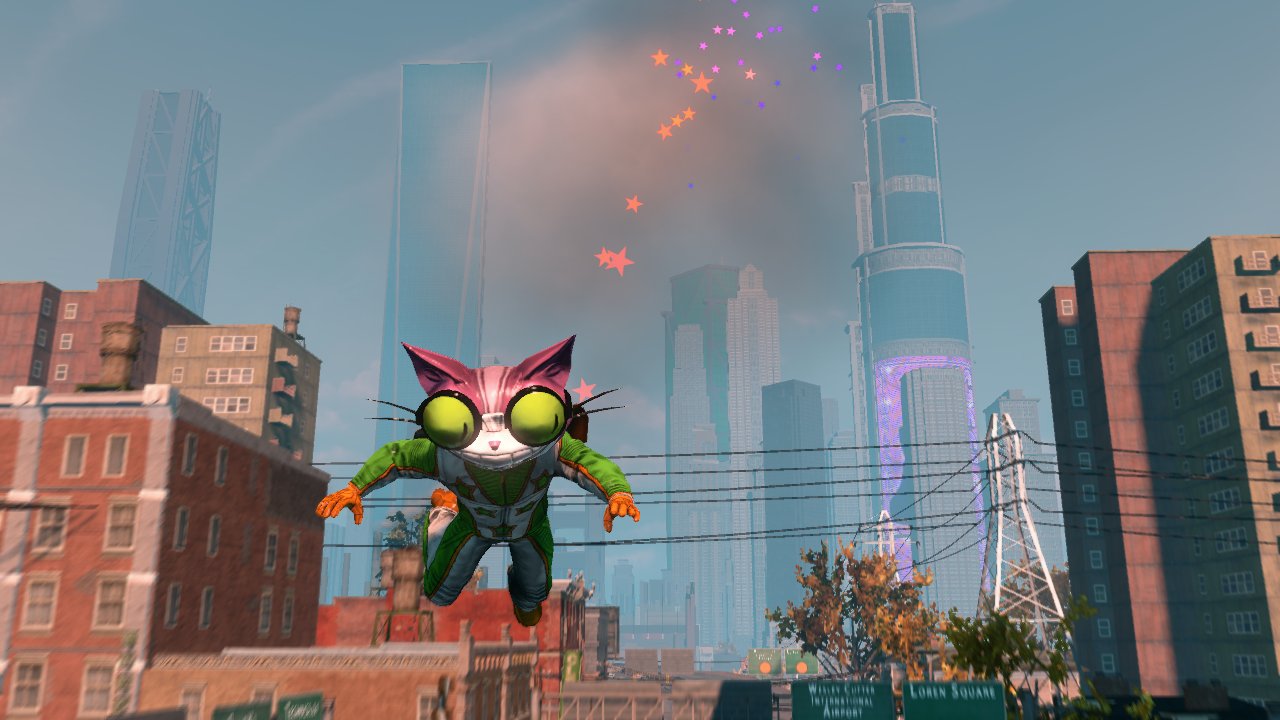 It seems rather alien now, to think that at one time the Saints Row series had somewhat of an identity crisis. An exclusive early 360 title, it was often – with good reason – compared to Grand Theft Auto, with a larger focus on gang warfare and a little more cartoonish than it’s most obvious rival. By the second game, Saints Row had firmly established an identity of it’s own, deciding to go down the silly OTT route, throwing faeces almost as far as it threw caution to the wind. Saints Row: The Third retains some of that garishness, but really shows a refinement in it’s delivery of the main story that marks it out in the series and more importantly, as it’s own title.

Story wise, you’re playing once again as the nameless and completely aesthetically-malleable leader of the Third Street Saints. Since the events of the first two games, the gang has become somewhat of a pop culture phenomenon in the SR Universe, with their own clothing line and even an energy drink to their name thanks to their outrageous over the top hi-jinks and heists that you pulled off in the last two games. However, after one particular job goes awry – the first mission of the game – you soon find yourself forcibly relocated to the new city of Steelport which is occupied by the three rival gangs. Each of these factions has their own distinct style and – for ease of identification – their own colour. The red of the smartly dressed Morning Star gang, the blue of the computer hackers known as the Deckers and the green of the wrestling fanatic Luchadores. Each of these gangs must be slowly ebbed out of their locations, so you take on tasks such as eliminating gang operations, buying shops and buildings, causing mayhem and taking part in the game’s ‘distractions’ alongside the story led missions, watching the map slowly turn to the Saints signature colour of purple.

Perhaps somewhat surprisingly, Saints Row 3 feels almost the most RPG-like of the series, in terms of the player character. Although it’s a shame to see the omission of layers from the character clothing options, character customisation is still among the best and most flexible of any game, including many MMOs. If you want to dress up wearing nothing but a giant bunny head while wielding a baseball bat with nails in it, you can. The previous games’ commodity of Respect returns, but tweaked slightly. Earning it allows you to ‘level up’ your character in a way that unlocks the ability to purchase new perks when you’ve got enough cash. You earn Respect through almost everything you do, whether it’s story led missions, destroying random gang operations or the distractions such as the returning fling yourself into oncoming traffic fun of Insurance Fraud or the new Professor Genki’s Super Ethical Reality Climax – a hilarious pastiche on popular Japanese game shows in which you’re tasked to run through a lethal course, avoiding traps while killing furry mascots in quick succession in order to keep up a combo and earn the most cash. It’s also important to note that most of these distractions are entirely optional – you can do as little or as many as you like, but completionists will certainly have to put effort in to finish every single task on offer.

If criticisms can be levelled, some of these distractions do feel recycled from Saints Row 2 sadly. It would have been great to see more new distractions like Professor Genki. At times, it’s also a shame how much the areas of Steelport feel very similar to each other other than a landmark here and there. It’s a bit of a double edged sword, because on the one hand clearly Volotion don’t want to restrict the player to certain areas by making one gang harder to take out than the others, but on the other hand taking on each gang away from the story feels very similar in terms of how you fight them and the environment in which you do so – for the most part. It’s certainly often hard – and more so when you’ve taken over the majority of the city – to work out exactly where you are without consulting the in-game map frequently. However, these niggles pale into insignificance when you consider the positives that Saints Row: The Third offers up on it’s plate.

Where this game really shines is in it’s story missions. The second game was famous for going so far over the top it was almost ridiculous, while the third keeps up that same level of crazy, but in such a way during the story that nearly every mission is in a perpetual struggle to be the most memorable. You’ll go from a bank hiest, to a gunfight in freefall in the skies to a car chase while singing along to the radio all in the first fifteen minutes. It’d be downright unfair of me to ruin all the surprises here, but it’s safe to say that the story missions are among the most varied, wacky and crucially fun in any of these types of game – quite a feat when you consider the open world genre can be amongst the most difficult genre to come up with unique missions for. The characters too are impressively memorable for the most part, you won’t necessarily like them all but it’s very rare you’ll see someone and forget who they are and why they sent you on their mission for very long.

Of course, the crassness of it all shouldn’t go without note. Yes, it can come off as lewd, crude and rude at times, but it does so ever so knowingly and so much so it does that very rare thing of being so far over the line to the point of drawing attention to the outright ludicrousness of it all, and throughout Saints Row: The Third there’s less and prevailing wind of fun rather more a full force hurricane. There’s certain aspects that perhaps seem unnecessary, but at the same time you know it wouldn’t feel like a Saints Row game without them. If you’re after a game that offers visceral, almost brainless over the top hilarity. The addition of a co-op wave based “Whored Mode” (as they call it) is a nice touch, but is really more of an afterthought compared to the gormless antics that can be had with the co-op throughout the main game allowing you to revel in the madness with a friend. And that pretty much sums up the playground nature of this offering: it’s certainly not going to be a game that offers high-brow intellectualism by any stretch, but it sure as hell is going to provide a heck of a lot of entertainment.