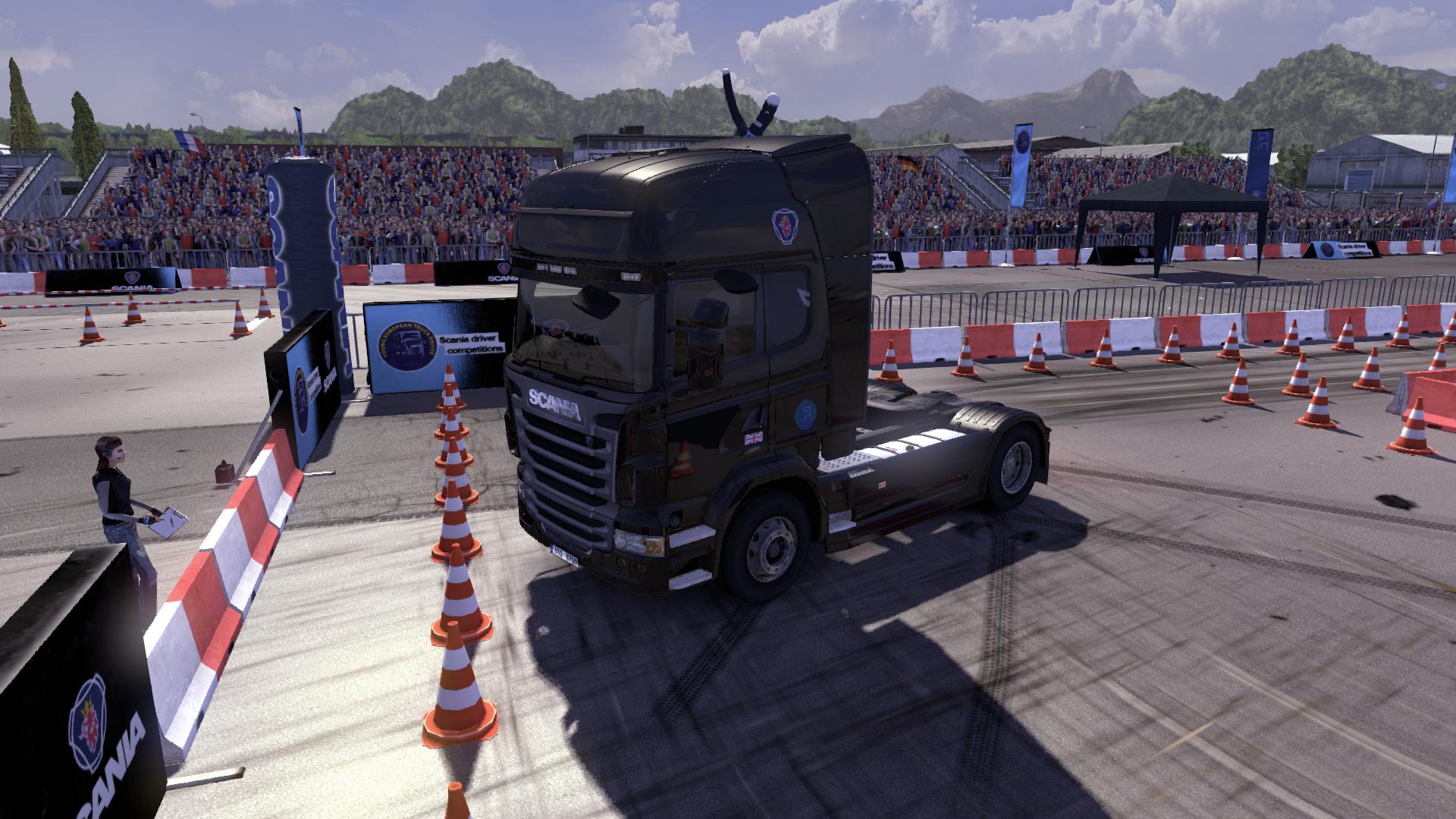 I was bitterly disappointed by last years Trucks and Trailers, a title which I felt damaged the growing reputation that was being enjoyed by SCS Software’s Truck Simulator series of games. Fortunately, the precursor to European Truck Simulator 2, Scania Truck Simulator, is a much more enjoyable experience. Hit the jump to read the review.

As you might guess by the name this title features a heavy influence from truck manufacturer Scania. This is felt most keenly with the presence of only one cab to drive in, a Scania truck. But SCS have done a really good job modelling the cab, both on the inside and out, this is all thanks to the new engine they are using which was developed for ETS2. The new engine is shown off best in the Dangerous Drives mode which features a variety of extremely challenging missions where you must drive your truck, sometimes with cargo, from point to point in the quickest time while avoiding hitting any obstacles. The first mission takes place on a route with a passing resemblance to the Road of Death. Things only get more challenging from there, while one mission really shows off what the new game engine is capable of by making you drive through a flooded town with rain lashing down. It is quite a sight and shows how far the series has come. The standout attraction though comes with the Driver Competition, a series of events inspired by the Scania Young European Truck Driver competition. These events are extremely challenging, and demand a very high level of truck control. One such test requires precision reversing of your truck and trailer through a tight z-bend at the end of which you must known down one pillar from a group of three. Needless to say, I don’t have the skills to complete some of these tasks and I often hear the crowd booing as I crash into the barriers, sometimes nearly toppling my trailer over.

There are some people out there though who can complete these challenges as if they we as easy as the reaction tests in the game. If you want to get some tips for how to approach each challenge you can easily watch a video of the top six ranked drivers for each event. It is a very slick feature and very useful for trying to figure out where you are going wrong. If these challenges scare you there is also a basic Driving Licence mode which challenges you with the basics of parking your trailer in various positions. Quick hint, if you are using an Xbox 360 pad, check the sensitivity settings, at first mine were out of whack which made completing the licence missions quite difficult, once they were configured correctly the whole game became much smoother.

While a lot of this might sound similar to what was seen in Trucks and Trailers, only carried out with a much higher level of polish and attention to detail, there is also a free drive mode which really adds to the replayability of Scania Truck Simulator. You can take to a reasonably sized city or the official Scania Demo Centre to trundle along picking up trailers and taking them to their delivery locations. While the majority of drops in the Scania Demo Centre are simple, when you take to the city you will come across some extremely challenging deliveries which will require you to use the skills you have to complete. To compete with the best on the leaderboards you will need to avoid crashes, stick to the speed limits and find the bonus Scania Logos dotted around. Free drive may not feature the route and company management that I expect from European Truck Simulator 2, but the deliveries work within the game as a whole without the extras. Without the free drive mode then I wouldn’t be too enamoured with the game as it would find itself comprising a bunch of mini-games, as it is though the free drive mode brings the game up to par for the £19.99 price. Even better, SCS are promising to update the game with more Dangerous Drives and to expand the already substantial city map which is always good to hear. The city in free drive mode is really impressive to drive around with a lot of different areas to explore. Scania Truck Simulator stands on its’ own as a really enjoyable truck simulator, and it shows off the potential for European Truck Simulator 2. I know a lot of people turn their noses up at games like this, but Scania Truck Simulator is worth checking out, even if you aren’t a fan of the series or the genre. It fully deserves this verdict.