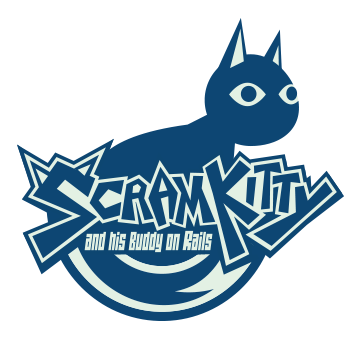 Scram Kitty and his Buddy on Rails to give the game its full title is a devilishly difficult game, somewhat fitting in with the trend of my recent gaming habits of Dark Souls II and the less well received, Wargame: Red Dragon. What makes Scram Kitty stand apart from Wargame is that you know how to play the game, the reasons for failure are simply down to your own mistakes. Failure, you better get used to it. What makes Scram Kitty work is that you readily know what you are meant to do: take your laser-blasting, rail-hugging chap around various levels of fiendish difficulty saving cats as you go. Why cats and why is the game apparently set on some demented space station? These aren’t questions you need concern yourself with, you just need to focus on finding those cats.

There are four per level, one hiding at the end of the level, another for collecting 100 bits of catnip (well..gold), one more for beating a mutant rat boss and another for finding another who leads you on a wild goose chase once you find him. All this as you run across the rails of the title.

You aren’t entirely confined to the rails as your little dude (does he even have a name?) can jump around, but it isn’t all that simple. When you jump, you find yourself attached to your rail with a bungee-cord like device. If you land on another rail you will transfer over, otherwise you get pulled back. The bungee-cord isn’t all bad though, with a bit of skill you can readily put yourself into an orbit around the various objects that litter the expertly crafted levels. Mastering the rails is the challenge of the game, traps lie everywhere you look once you’ve made your way past the tutorial like first four levels. Spike traps which knock off a point of health, rails which send you in the opposite direction, rails which know off health if you land on them, rats and more rats. It soon becomes a challenge to navigate your way to the level exit in one piece, though in the style of Trials, you can get right back into the action once you die. Unlike Trials which in its early days followed a similar fixed-route journey, there aren’t any checkpoints.

Finding yourself in sight of the finish only to make a mistake with your jumping it heart-breaking. Though as with classic titles like Chips Challenge, you instantly know where you went wrong, it is just a case of mastering the systems to ensure you can save those precious cats.

Scram Kitty is designed to be played almost solely on the Wii U GamePad, when I started playing I didn’t even have the TV turned on. You can use the TV as a second screen (or vice-versa even) which provides you with a slightly zoomed-out view of the level along with the occasional arrival of a large cat to provide occasional hints as you flash through the levels. In a world where the Wii U doesn’t get much, or any, love, it is certainly good to see an indie developer making use of the tools at hand. Scram Kitty is a tough old game, no doubt about it, but it poses a challenge that brings back fond memories of classic retro games. If you are one of the few brave souls who own a Wii U and fancy a challenge, pick this up.

Review based on copy supplied by PR agency. Please see this post for more on our scoring policy.