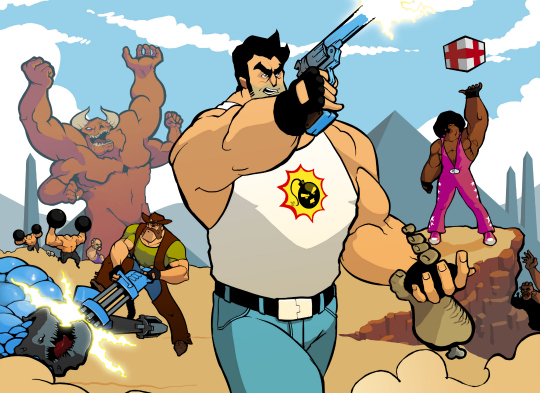 For over a decade, Serious Sam has been the badass, gun toting, laugh inducing pin-up icon of the first person shooter genre. Settled quite happily in this field, the series has received rather generous reviews, flourished through a committed fan base, and grown from a once PC-only title into to a multi-platform epic.

But Serious Sam: The Random Encounter is different. It’s not an FPS.

Part of the Serious Sam indie series, and the brain child of small-time indie developers Vlambeer, The Random Encounter is actually an RPG, and follows in the footsteps of Serious Sam: Double D – by applying the Serious Sam mould to alternative gameplay types. I know, right?

Surprisingly enough, then, the RPG setting is quite a welcome change to Serious Sam – after all, The Random Encounter (or TRE, as I’ll refer to it from here on out) is quirky, fun and highly accessible; just about everything you’d want from a budget turn-based RPG title.

And TRE really is a budget game. That’s not to say that the overall quality is lacking, there’s certainly more than enough high octane heart-pumping combat being dished out here, it’s just that it won’t take you very long, at all, to battle your way through it.

In short, you’re looking at three worlds with only a handful of stages for each, studded with five rather challenging bosses. In total this equating to an hour or two, at most, of core gameplay. There’s also an endless mode to keep you occupied for a little longer after you’ve ploughed through the storyline, but realistically you’ll probably have had enough by then. You see, the storyline delivers such a large dose of nostalgia-filled bang for your buck, that it makes the endless mode feel rather lacking as a result. TRE is far more interactive that your average turn-based 8-bit action title, too, on the basis that combat requires more than just a dice roll. Every five seconds you’ll be thrown back to the attack menu, where you can change weapons, alter your direction of fire, or use consumable items. During the attack phase itself, you can direct Sam and his two companions up or down the screen, to avoid enemy fire and indirectly reposition the direction of your bullets. There’s no surrender or fleeing from a fight either, so expect to die. A lot.

Fortunately, when you run out of lives and are presented with the game-over screen, you’re only carted back to the latest level that you reached, rather than the very start of the game.

Puzzles frequent the levels, but, in keeping with the traditional Serious Sam style, they’re remarkably easy. More often than not you’ll need only kill enough enemies through random encounters to open a door leading to a key, which you can then use to clear the level. Power-ups are also in abundance, providing you with a little helping hand when you need it most. But a word to the wise – use them sparingly if possible, as you’ll really need them for the final stage.

Despite the intuitive attempt at incorporating an RPG-style battle system, then, the result is marginally infuriating, especially as you’re given the ability to move up and down, but no practical method through which to dodge enemy fire.

Allow me to explain. More often than not, particularly in the later levels, you’ll simply be presented with a wall of enemy bullets, which are impossible to avoid, making this game more about spamming health potions and damage buffs than it ought to be. And while it’s possible to dodge with only Sam, and just about doable when joined by one other companion, it’s not long before you’ll form a budding trio, at which point all three characters will remain a set distance away from each other during fights, considerably limiting your wiggle room when it comes to dodging enemy fire. Also on the topic of unbalance, the final few random encounters of the final stage are almost agonisingly difficult, requiring you to use most of your consumables before the final boss. Evidently this isn’t a wise move, but, if lady luck isn’t on your side, it’s largely unavoidable. By design, the game also throws a random combination of enemies your way for each encounter, making any attempt at pre-planning simply impossible.

The Random Encounter has certainly captured the winning personality of the Serious Sam series, but the gameplay isn’t quite there just yet. At present, TRE feels very much like a half-baked product. The potential for success is great; the development team just need that final, helpful little shove in the right direction.

Still, for a cheap and cheerful title, and particularly one offering such an inviting twist on a popular gaming classic, it’s hard to criticize heavily. Got a fiver lying around? You could do far worse than to spend it here.

For more information on our review system, please read this page.