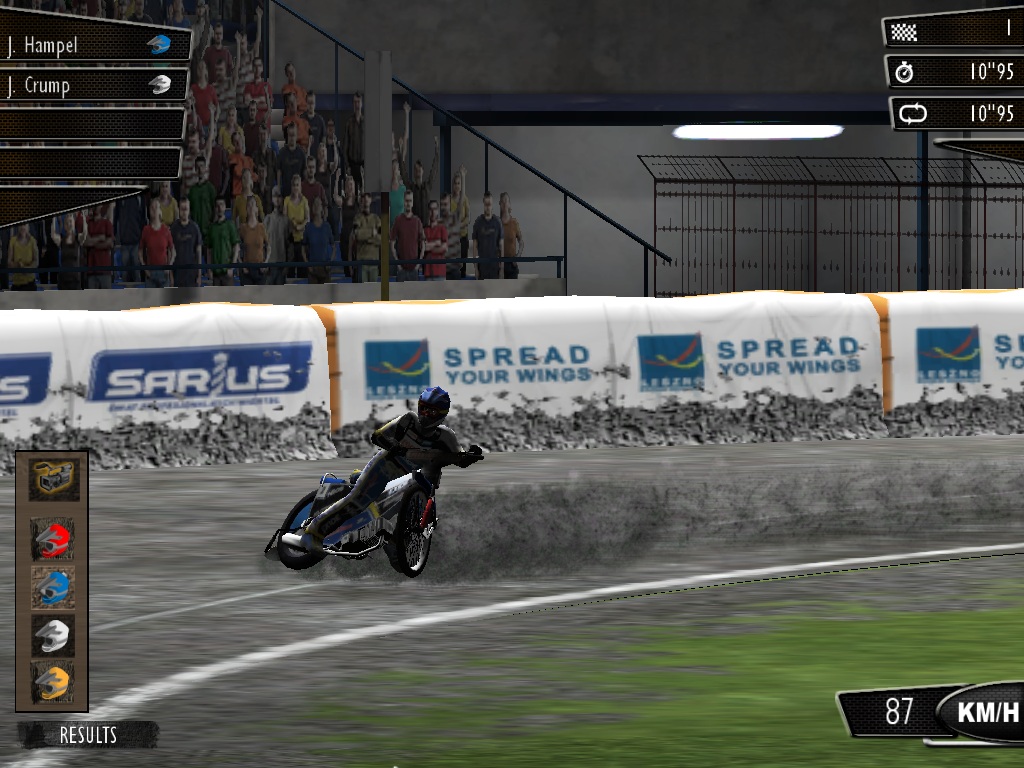 There are two fantastically obscure simulation games sitting on my desk at the moment which I have been having a play around with. They are FIM Speedway Grand Prix 4 and London Underground Simulator. Hit the jump for some mini verdicts on both.

I would assume that the sport of Speedway is very fast and exciting if you watch it in person with action taking place all over the track as four riders at a time take part in a series of heats to win the event.

The trouble is that Speedway Grand Prix 4 is an entirely unforgiving game for any newcomer to the series. Getting to grips with the handling of the bikes and the technicalities that can get you disqualified will take you quite some time.

The bikes really don’t turn naturally and slowing down with the brake does little to assist, to safely negotiate a turn you have to start a slide and pray you don’t hit the wall. Or that your rider doesn’t come half off the machine during your slide. You have a variety of bike settings to change between heats, but several times I was entirely unable to change any settings and would get dumped into the next heat without warning. There is a career mode where you create your own profile and choose a team to race for, but you can experience all the game offers just by taking part in a single race.

I’m not going to be rushing back to play Speedway Grand Prix 4 though, it is extremely unwelcoming for newcomers and looks absolutely awful. Avoid unless you are a fan of the series, or have a serious desire to explore all things Speedway related. After experiencing the joys of the tube when I was in London for the Eurogamer Expo I was interested to see how London Underground Simulator came across with its’ representation of the Circle Line. I spent most of my time on the District Line, so I can’t comment on how accurate the ‘C Stock’ in this game is compared to the real world version, but externally these are very much tube trains.

I can only imagine that the drivers cab is modelled accurately, having never looked inside one I can’t confirm or deny the accuracy. If you have the Raildriver CabController you are able to use that for the majority of the basic controls. If you haven’t invested in one of these devices you can use a combination of keyboard and mouse to get your train up and running. In addition to the obligatory tutorial level, there is a nice collection of pre-planned missions, or you can just free ride various routes on the circle line trying to keep to time without running through any red signals. Or by sending the train into reverse and derailing it like I did on my first non-tutorial attempt at driving a tube train.

In truth, I am a bit rubbish at controlling the train and have managed to run through red signals several times causing a lovely game over message, but I am sure that for experienced fans of train simulation games they will get to grips with this very easily. London Underground Simulator is a very well crafted simulation and imagining of the London Underground, but remember that it is a train sim before you rush out to buy it on a whim.

Both titles are available on PC and were reviewed on the PC. You can find out more about our review policy here.