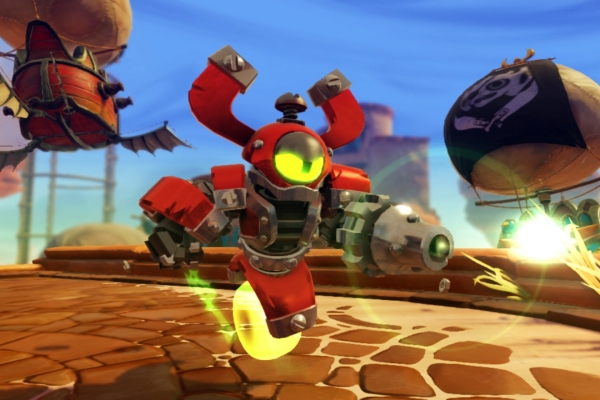 Guest writer Andy Robertson takes a look at the upcoming third installment of the Skylanders series; Swap Force. The toy/game hybrid has seen growing popularity recently and the genre will soon expand with Disney Infinity.

Skylanders Swap Force is the third iteration in the franchise and works hard to overcome its perceived shortcomings. Not only are there new adventures for your old characters (toys) but it also adds an impressive 56 new figures. These take the form of 16 Swap Force, 16 Core, 16 Series 3 and 8 Lightcore characters.

The question in all this is whether this is a video-game that uses toys to access content, or a toy that uses video-games to sell more figures. The truth is probably somewhere between the two. Beyond this dichotomy though there is enough novel gameplay to attract even more serious players.

For instance, the new Swap Force characters allow you to mix and match the tops and the bottoms to create 256 different combinations. At first this sounds like a gimmick, but in the game it actually works like an RPG party system – only here you can instantly swap things around by adjusting the physical toys on the portal. Perhaps this is something we could see Final Fantasy or Mass Effect embracing in some future iteration.

This is all well and good, but there is a price. The figures are quite expensive (around £10) and if you get into collecting them all Skylanders Swap Force could cost a lot. The thing to do here is to focus on just those characters you really need, rather than expanding your collection too much. Also note that you can finish the game with just the figures in the Swap Force Starter Pack…

As you can see in this video, the biggest tension this year is that you can no longer use your Portal peripheral from with Skylanders Giants or Skylanders Spyro’s Adventure. This means that everyone will need to buy a new Starter Pack. This will include the new Portal, the game disc, one Series 3 figure and two Swap Force characters.

It will be interesting to see how much these Starter Packs costs, particularly with Activision coming under some pressure from Disney Infinity, a similar toy-meets-videogame offering from Disney. In fact it is this competition that is likely to drive this genre into more cost effective territory, and in our book no bad thing.

The key thing will be for Skylanders Swap Force to get the pricing spot on. This is something that Activision has not currently commented on.
—
Andy Robertson runs Family Gamer TV and writes about games and families.