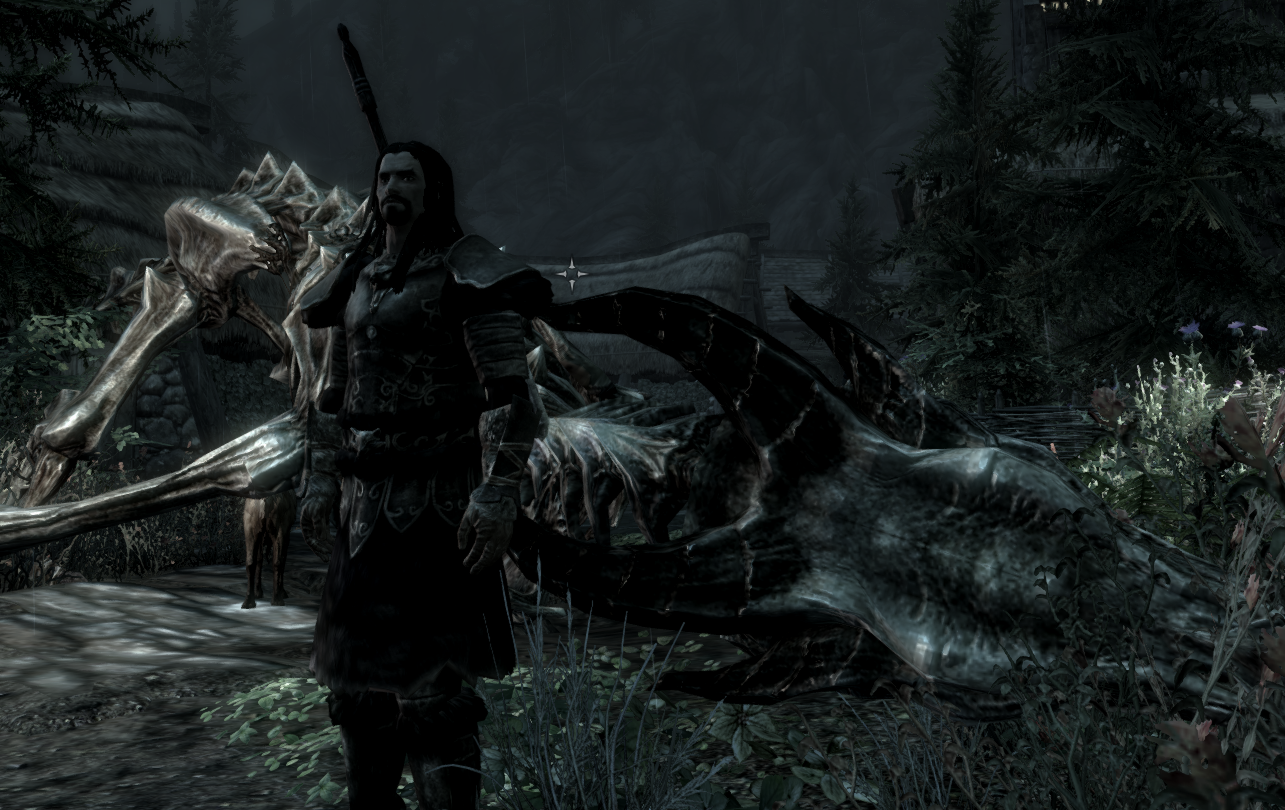 Skyrim has come along and taken us off to an amazing world full of dragons and adventure, I think we are all agreed that it is a ‘Red Mist’ title, and definitely a Game of the Year contender. I am sure though that you want to know more about it than that, thus a few of us here on The Reticule have come together to share ‘Our Thoughts’ on this amazing title. Hit the jump to read our words. Chris Evans – My god I love this game, this is worthy of a Red Mist, no questions asked. I played a fair bit of Oblivion, and I sure enjoyed that, but Skyrim is on another level entirely. I wasn’t sold on the introduction, but as soon as I had escaped the dragon and was walking along with that chap at the beginning, I was enthralled. Steam tells me I have played it for 19 hours, and in that time I have barely scratched the surface of what the game has to offer. I have completed a tiny proportion of the main quest and only visited three of the main cities.

The most enjoyable aspect of the title isn’t the main quest line, or indeed the Dark Brotherhood or Thieves Guild, the best aspect of Skyrim is the wilderness. After getting to the first small village after the opening sequence I didn’t bother following any quest markers, instead I started to climb a mountain and was soon caught in a blizzard with a small group of bandits attacking me. After despatching those ruffians I came along my first dungeon and explored every nook and cranny I could find in there.

Somehow, I convinced myself that I had to stop playing Skyrim as much as I was, I feared it would completely take over my play time. Sadly that meant I have become entangled once more in Football Manager 2012, but I know that I will soon head back to that frozen world, even if it is only to become a werewolf like Nick.

Seriously, this game is brilliant, I saw one of my cousins recently and he was asking whether he should ask for Skyrim for Christmas, I enthused to him that he definitely should get it. This is a gem of game. Nick Wheeler – If Skyrim has taught me one thing, it’s that there are few problems in life that can’t be solved by turning into a werewolf and killing everyone.

I am Druss. Wanderer of the snow-fields of Skyrim. Dragon slayer. Vampire hunter. Saviour of that guy chased by bears. In my spare time I enjoy chopping wood for the local lumber-mill, catching fish with my bare hands and transmogrifying into a giant terrifying beast of the night.

Since becoming a werewolf I’ve formed a new outlook on life. First thing I did was rid myself of that damned horse. Slow, lumbering and smelly it was, plus I could never find a space to park it in the stable. But now, ignoring the seconds of agonising bone-snapping trauma involved in transformation, all my travelling needs are taken care of with my own four paws. No matter the distance, miles of snow-covered landscape are devoured by the rhythmic thundering of my paws, as is any poor helpless wildlife that happens to cross my path.

In combat I am devastating. My claws rend both human and animal flesh with equal speed. But in the rare event I do find myself outmatched, I carry one final ace up my sleeve. There are few things in Skyrim that can run away as fast as a werewolf. Call it cowardice, but for me it’s an extension of the simple pleasure of watching the landscape drift by under my feet. Us wolf-people have a somewhat bad reputation. My appearance at social occasions in wolf-form does seem to be frowned upon by the attending guards, no matter what vintage wine I bring. Perhaps it’s my tendency to dribble on the carpet, shed hairs on the rug and chase horses, I’m not sure. Or maybe it’s the fact that I have a habit of tearing people limb from limb before feeding on their mangled remains. Who knows, I’m no expert on court etiquette.

On the rare occasions where decency or clothing standards dictate a hairy wolf-man is not acceptable, I carry additional protection in the form of an ancient two-handed axe, Wuuthraad. Since coming into my possession, the already legendary axe has never been far from my reach, smashing its way through the faces of those who stand against me. I hear there are people out there able to control the elements with magic and spray fire from their fingers, but I just hit things with my axe until they don’t get up any more.

Part of my brain is screaming in the background saying this isn’t a game, it’s too easy. But the weapon I carry is enormous, heavy and sharp. I’d probably be a little more concerned if it didn’t rend foes in two after only one strike. So fights may be a little one-sided, so what? I just lopped off a bandit’s head with one blow and watched it bounce down a flight of stairs, and now I’m going to turn back into a wolf and eat his family. Michael Johnson – I feverishly tore open the box, slamming the DVD in my tray and spent 20 minutes fidgeting as the game installed upon my trusty warhorse of a PC. I had done my best to ignore the hype, but it had taken a hold of me nonetheless and I was excited.

You can imagine my disappointment then, when it turned out that ‘Skyrim’ was not the experimental cloud-based Anilingus adventure I had been expecting. I held on to a vain hope that after the wagon based expository intro, we’d get to the real meat of the game. But within five minutes I’d accepted that this was in fact a game about Dragons and Beards. And not even a saucy one like The Witcher 2. In fact, it may even be the least saucy game ever made. Those of you have married in Skyrim, will have presumably snorted out laughter at TES V’s version of courtship, which seems to involve wearing a necklace and entering into a business partnership (in fact the main perk of marriage is that it comes with a shop!).

Skyrim doesn’t really have much time for things like ‘drama’ or ‘relationships’ or ‘good writing’, but it doesn’t really need them. It gives us an astoundingly large world, packed with places to explore, people to help or kill, loot to grab, weapons to craft or enchant and quests to complete. And despite the lack of passable prose, it manages you to draw you in to this beautifully crafted realm, full of snow-covered mountainsides, howling gales and starkly beautiful waterfalls, nestling in the otherwise rugged landscape. It also has INFINITE DRAGONS – the ultimate spectacle and they lend the game a sense of grandeur (the wonderful score by Jeremy Soule doesn’t hurt either).

Skyrim is a place that begs to be explored, The Elder Scrolls games may not give us freedom to change or really even affect the central narrative (or the ancilliary stories that run parallel), but they make up for this by giving us the most impressive world in gaming, filled with treasures and secrets, traps and monsters, friends, foes and dragons. We make our own stories in Skyrim (although I may have to turn to fan-fic after the misleading title gave me false expectations). Jordan Harling – Until Skyrim I had never really understood the allure of the Elder Scrolls games. I had played Morrowind briefly and Oblivion fairly extensively and wasn’t really impressed. It was clear to me that both were technically extremely good, with massive world maps and deep quest lines but there just wasn’t any emotional weight to the games. The worlds felt strangely hollow and the NPCs lifeless.

This isn’t the case in Skyrim and it’s not easy to quantify why, which is a complement to the subtle changes that have been made to the AI. Thanks to the new radiant AI system NPCs act much more realistic than in previous games. Drop a pile of items in the middle of a town and some characters will pick them up for you, others will take them for themselves and some may even shout at you for littering.

The more realistic NPCs add a much greater sense of emotional weight to each quest, you’re not just completing a fetch quest for a robot, you’re adventuring for a family heirloom for Idolaf Battle-Born. This extra connection makes hacking your way through the interwoven quest trees feel much more satisfying in previous games.

One area where Skyrim hasn’t really improved though is in combat. Melee attacks don’t carry the weight they should and battles frequently turn into tedious bouts of clicking until yourself or everyone else is dead. Had Bethesda implemented a system more similar to the one found in Dark Souls then Skyrim may well have been the closest thing to a perfect game I’ve ever played. However, even with the flawed combat Skyrim is a sublime game, one that no doubt will be competing for many people’s Game of the Year award.

2 thoughts on “Skyrim – Our Thoughts”