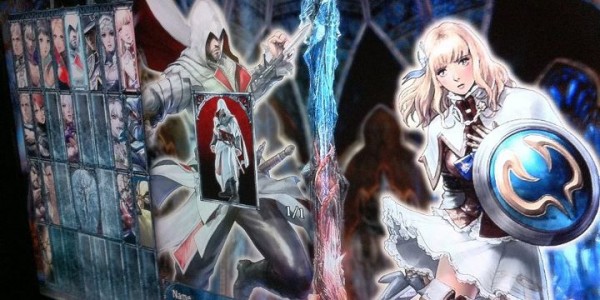 For all of their convoluted relationships, quests and all the arbitrary specifics of their canonical stories, the only thing that puzzles me about Namco’s fighting game mythologies is how some people actually manage to care about them. But they do, and Soul Calibur‘s habit of dropping in guest characters has long been a source of acute pain for those who can wrap their heads around the game’s tale of two swords better than I can.

We’ve had cameos from Zelda‘s Link, Tekken‘s Heihachi, God of War‘s Kratos and most controversially of all, Yoda and Darth Vader (from a science fiction franchise of some repute). Watching each game’s two paragraph story attempt to justify their presence in a fantasy version of our own renaissance is apparently painful for some. News that Assassin’s Creed protagonist Ezio Auditore da Firenze would appear in the forthcoming fifth instalment was apparently well received: fantasy renaissance, sci-fi renaissance. Sans difference.

Even if he weren’t going down well, there’s plenty of ways to fight without ever seeing him. So far, eighteen characters have been revealed. 11 of these are returning faces, including the ever unexciting Siegfried, token spandex crone Ivy an her gimp-like male equivalent, Voldo. Jumping forward some 17 years from the previous game, there are also 6 announced new characters, a mix of completely new faces, children and disciples of old characters.

Including Ezio, we now know of 18 characters: considering screenshots of the player select screen show as many as 32 boxes, there are still a few more to be revealed.

One would expect at least a ‘random’ option to take up one of those squares mind you. Also, they’re bound to leave space for characters created in the game’s customisation mode. Frankly, it’s no exaggeration to say that I played dress-up in Soul Calibur IV for longer than I spent actually fighting. And judging from the comprehensive features in the video guide above, I may have to submit a Soul Calibur V review based entirely on this ultimate doll’s house simulator.

New features include a greater variety of clothing patterns, body shape / size controls and a whole host of prefabs and decals to stick on your character models. Expect some uncanny versions of unlicensed characters to appear in youtube videos within days of release, much the same as they did with last instalment.

Soul Calibur V is due out on the 31st of January in North America, 3rd of February in Europe for both Playstation 3 an Xbox 360.