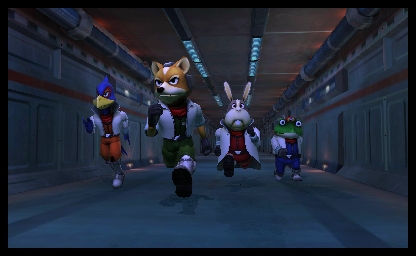 Nintendo is making a habit of forcing early 3DS adopters to make do with remastered versions of old games while they wait for the company’s big guns to materialise at the tail end of the year. We already had the admittedly excellent Ocarina of Time 3D back in June, and now Nintendo has unleashed Star Fox 64 3D upon the 3DS faithful. However, whereas the remastered adventure to rescue the land of Hyrule offered players a tweaked-to-perfection nostalgia trip through what was already a nigh-on flawless gem, Star Fox 64 3D doesn’t fare quite as well.

Star Fox 64 3D is, unsurprisingly, a remake of Star Fox 64 (or Lylat Wars, as it was known in Europe). Players are tasked with flying Fox McCloud, leader of the Star Fox team, through seven levels in their mission to do away with Andross, an evil monkey scientist who has waged war on the peaceful planet of Corneria after five years of exile on the desolate planet Venom. In the same vein as OoT 3D, this remastered version of the highly revered N64 title is largely unchanged from how it originally appeared, although a few extra bells and whistles have been added. Right off the bat, the most striking upgrade comes in the form of some vastly improved visuals, the most impressive aspect being the levels you fly though; literally everything has been given a complete overhaul. Water no longer resembles a lifeless blue syrup, buildings and other structures are more detailed and clearly defined. Star Fox 64 3D is head and shoulders above the blocky, angular and sparsely textured environments of the original game. Cranking up the 3D slider results in Star Fox 64 3D looking even more fantastic; even when things get heated and there are enemies and laser fire littering the screen, the framerate doesn’t dip one bit, which is a feat that not many 3DS games have managed. 3D plays a bigger part here than merely making everything look prettier, though. In fact, Star Fox 64 3D is a prime example of a game that genuinely benefits from appearing in true 3D. With the effect switched on, it’s far easier to judge the distance of incoming enemies and obstacles, allowing you to maneouver accordingly with minimal fuss. That is of course partly down to what control setup you’re using. Star Fox 64 3D has an impressive array of control options available. Players are able to use the standard circle pad and buttons option – with a few button mapping options in there for good measure – or use the 3DS’ gyroscope to steer their craft. Doing so is something that you’ll either take to or you won’t. Personally, I couldn’t get on with it, even though the game adjusts the difficulty should you decide to play in this way. One thing to note is that using the gyroscope makes it extremely difficult to keep the 3D effect from spazzing out as you’re constantly moving the 3DS around.

While Star Fox 64 3D boasts significant improvements and additions in terms of visuals and controls, almost all other aspects of the original release remain unchanged, for better or worse. The voice acting is still universally terrible – although mercifully sparse – and the game has a whole is still almost criminally light on content. Playing through the campaign can be accomplished in around an hour; granted, there are numerous routes to different levels – of which you play through seven of a possible sixteen – that you can figure out how to gain access to, but if you’re not the sort of gamer who is entertained by replaying a game over and over, then neither these alternate routes nor the Score Attack mode are going to hold your interest for long.

Multiplayer goes some way to inject some longevity into Star Fox 64 3D. Up to four players can battle it out in as many different arenas, with the added bonus being that only one copy of the game is required, no matter how many of you are playing. It’s entertaining enough, with several gameplay modes available to keep things interesting. The game also takes a photo of everyone playing before you start and displays these photos in-game, so you’ll always know exactly who you’re blowing out of the sky. You’re also able to see your opponents’ reactions to being shot down by you – or indeed, shooting you down – which is a nice, if gimmicky, addition. Unfortunately, multiplayer is only available through local Download Play and not online. Back on the N64, of course Star Fox 64 would have lacked online play, but the 3DS is more than capable of such feats, as well as being able to support far more players. Nintendo and Q-Games could have put some real depth into Star Fox 64 3D’s multiplayer component; online play, ranked leaderboards and persistant player progression all seem like odd omissions as far as gaming is concerned today.

While it may sound like I’m being overly harsh, Star Fox 64 3D is by no means a bad game. It’s every bit as playable and entertaining as it was back in 1997. However, whereas Ocarina of Time 3D came complete with a wealth of additions, tweaks and improvements, Nintendo’s second 3DS remake this year has not had nearly as much attention lavished upon it. Updated visuals and a camera gimmick are all well and good, but Star Fox 64 3D is simply far too light on both content and lasting appeal to be worth a full priced purchase. If you enjoyed the original game and are after something you can play for quick bursts every now and then between more engrossing and long-lasting affairs, then by all means give Star Fox 64 3D a go. If, however, you’re after something that you can play for hours on end, you’d be best off spending your money elsewhere.

For more information on our scoring policy, please read this page.