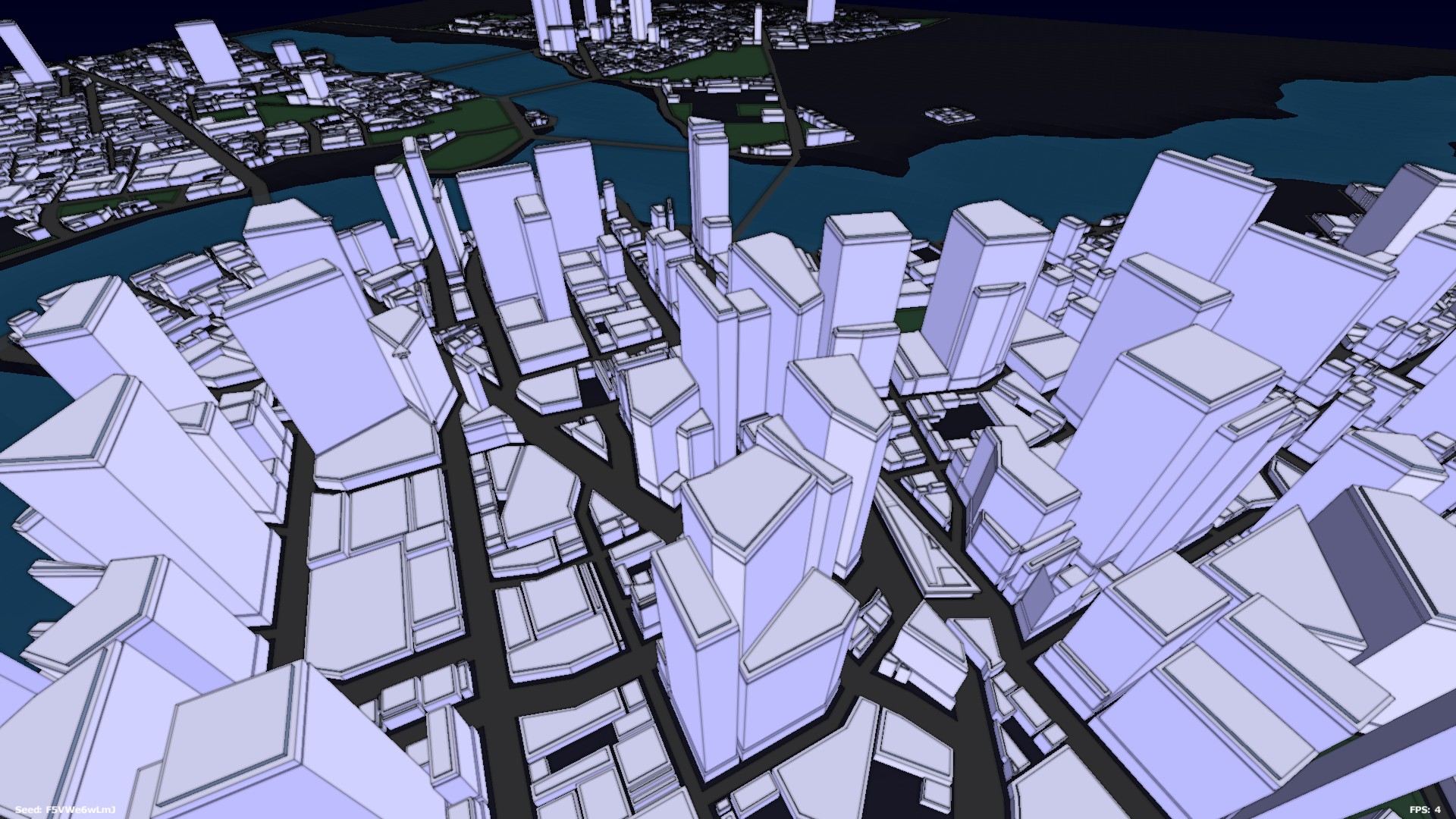 The city exists in silence. With no cars filling its streets and no pedestrians walking its pathways, I am alone.

Only an eerie silence fills the endless streets and avenues. Towering, featureless buildings line countless streets, their menacing white faces glaring down upon those daring to walk in their shadows. What am I doing here? I’m not quite sure. With no street signs and no road markings, I am wandering an endless maze of urban living, through a place I know only as Subversion.

Introversion Software’s city generator was designed for Subversion, an overwhelmingly complex game intended to combine the themes of Uplink, Defcon and Darwinia into one cohesive and procedurally generated world. From the moment I first saw it in action, I was in love.

Across a featureless landscape, a series of mysterious circles dance. Circling over the landscape, they ponder their final resting place with an ineffable wisdom that only a mysterious circle can hold. Their work done, the dance comes to an end and the circles settle softly to the ground. Then suddenly, radiating outwards from the center of the circles, roads fill the landscape with believable routes and pathways. They form a spiderweb lattice of civilization across the land, and within the space of a few seconds the map has changed from a bland wasteland to a patchwork landscape covered in roads.

Then the buildings arrive.  Erupting into existence alongside the roadways, the towering white blocks blink into existence, filling every inch of the city, cramming thousands of invisible occupants into its borders. With no markings or features on their towering sides, your only understanding of their purpose or design is down to your own interpretation. Utopian paradise or dystopian future, it’s up to you.

Introversion’s Subversion was billed as their greatest game to date. Working on the successes and failures of their past releases, this time they were finally going to make something special. Lead Designer Chris Delay spoke of his newest creation on the Introversion blog.

“Subversion is undoubtedly the most ambitious game we’ve ever attempted to create – massive in scope and totally uncompromising in its requirements. But every day I work on it I’m even more convinced – this is the big one, Introversion Software’s Magnum Opus, and it’s going to be the best game we will ever make.”

But then, in October 2011, Introversion pulled the plug. Despite being seemingly packed with experimental gameplay and extraordinary technical wizardry, the direction of Introversion’s masterpiece was never quite decided upon. With dozens of remarkable ideas weaved into Subversion’s makeup, Introversion’s Chris Delay realised that they had ‘made the fatal mistake of having more fun making the game than gamers would ever have playing it.’

At a stroke, Subversion had gone. For all its unique ideas, imagination and complicated mechanics, it was still missing one vital aspect; fun. So the decision was made, it had to go.

From the smoldering ashes of Subversion, solace can at least be taken in the fact that a phoenix arose. Using ideas pioneered during the development of Subversion, Delay and his team are currently working on their new management game Prison Architect. Whilst I’m certainly looking forward to Prison Architect’s completion, I still can’t hear mention of Subversion without feeling a touch of sadness about what could have been.

Now, Subversion’s streets echo with past promises of the best game Introversion never made. The city generator remains a by-product, without purpose or meaning, a curiosity on a developmental road less travelled by.

For the moment then, at least, Subversion’s city generator rests. From time to time I’ll generate a city, only to wander its empty streets and wonder at what could have been. Looking up at the vacant skyscrapers, I can’t help but dream what kind of people could have lived there and the lives they could have lived.

Perhaps one day I’ll find out. Just not today.

One thought on “A City Of Dreams”