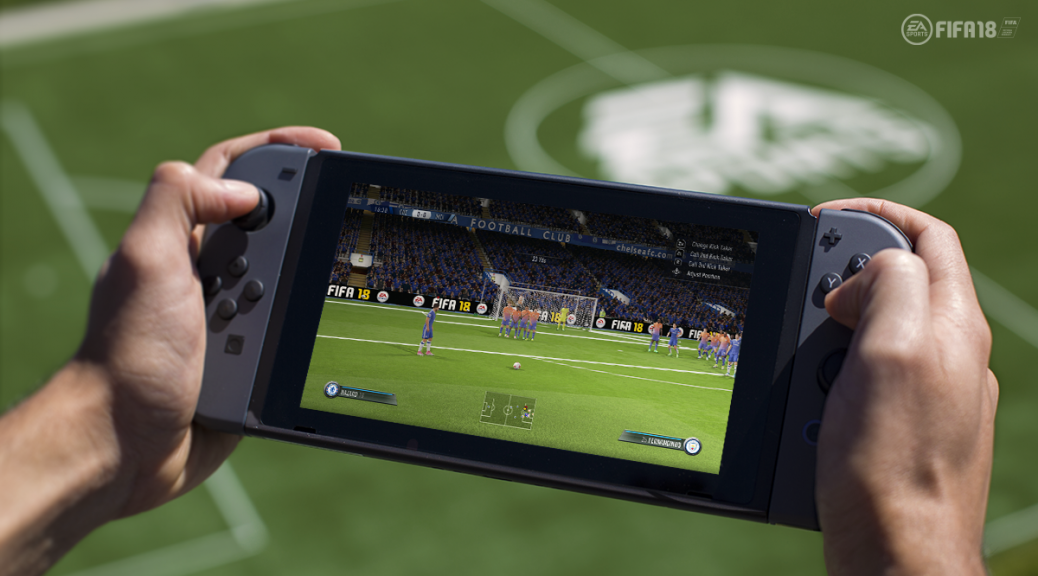 The FIFA franchise is one, like many sporting games that aren’t Football Manager, where I tend to dip in and out, skipping seasons here and there without much concern. Unlike some, I’ve never been one who absolutely needs the latest release, and I would have been quite content skipping FIFA 18…until I saw the Switch version on offer.

I’d played this version back at EGX, and walked away impressed with what EA had done to bring the game to Nintendo’s charming device. It isn’t a like-for-like match with the versions released on the other consoles, but when you can play FIFA wherever you want, who is really that bothered?

I didn’t pick up last years offering, so haven’t had the chance to check out The Journey mode which so many fans of the game have expressed enthusiasm for. Perhaps that is why I’m not entirely disappointed that it hasn’t made the transition to the Switch. Nintendo’s device is of course somewhat limited in the power stakes, lacking some of the graphical prowess on show in the other versions. Knowing this going in, I never expected EA to craft another version of The Journey for a different game engine.

Not this year at any rate. Hopefully the Switch continues to sell well, and EA decide to support it further next year with another edition of FIFA. Whether they make the investment to craft something like The Journey for the Switch is even more of an unknown. Has this year’s edition sold enough on the platform for EA to justify it to themselves to release another one? I’m not sure, but I hope they do, and I hope they expand on what they have already made as this is a fine game.

If you put aside the missing Journey, and a game engine that is a step behind the other versions, this is still most definitely FIFA, with the added bonus of being able to play on the TV or handheld. And you know what? It really works well playing it undocked. I’ve been happily putting on some real world sport, picking up my Switch and checking into FIFA. Disregarding The Journey, the expected features and present and correct. Ultimate Team, Be a Pro and a whole host of other ways of playing. I tend to avoid Ultimate Team in other FIFA games, it all seems more complicated than it should be, but being able to pull up my Switch, and flick through the different options in here at my own leisure is more appealing and seems destined to actually grab my attention, even if I will keep my focus on the singleplayer games.

Be a Pro is my usual hunting ground in EAs sports games, and FIFA 18 is no exception. I’ve created a rough likeness of myself, picked a random club and ended up playing for the Newcastle United Jets in Australia. Kind of fitting with the Ashes on the go, but I was left sad that the Welsh league still isn’t present. I enjoy playing as myself, and avoiding the pressure of the rest of the team during Be a Pro, but the camera angle has never done the mode any favours, often having to be zoomed out too far for wing players when the ball is in the opposite part of the pitch to feel like you are actually watching the game. It’s tough, and those moments are made more annoying when playing handheld, but once you get the ball, feeling so close to the action is great fun.

Normal matches don’t have any of those quirks. They look fantastic, even if they aren’t using the latest FIFA tech, and play out as any FIFA does. As in, I’m pretty crummy and I stick to my normal trick of running straight into the opposition defenders while using all of my sprint, or trying crosses from all sorts of weird and wonderful angles.

At the end of the day, it is FIFA, on the Switch, and you can take it anywhere you want to play. What’s not to love? If this was a full review, I’d be going for a Headshot. The lack of The Journey is disappointing, but the lack of the Welsh league? Awful decision ref.