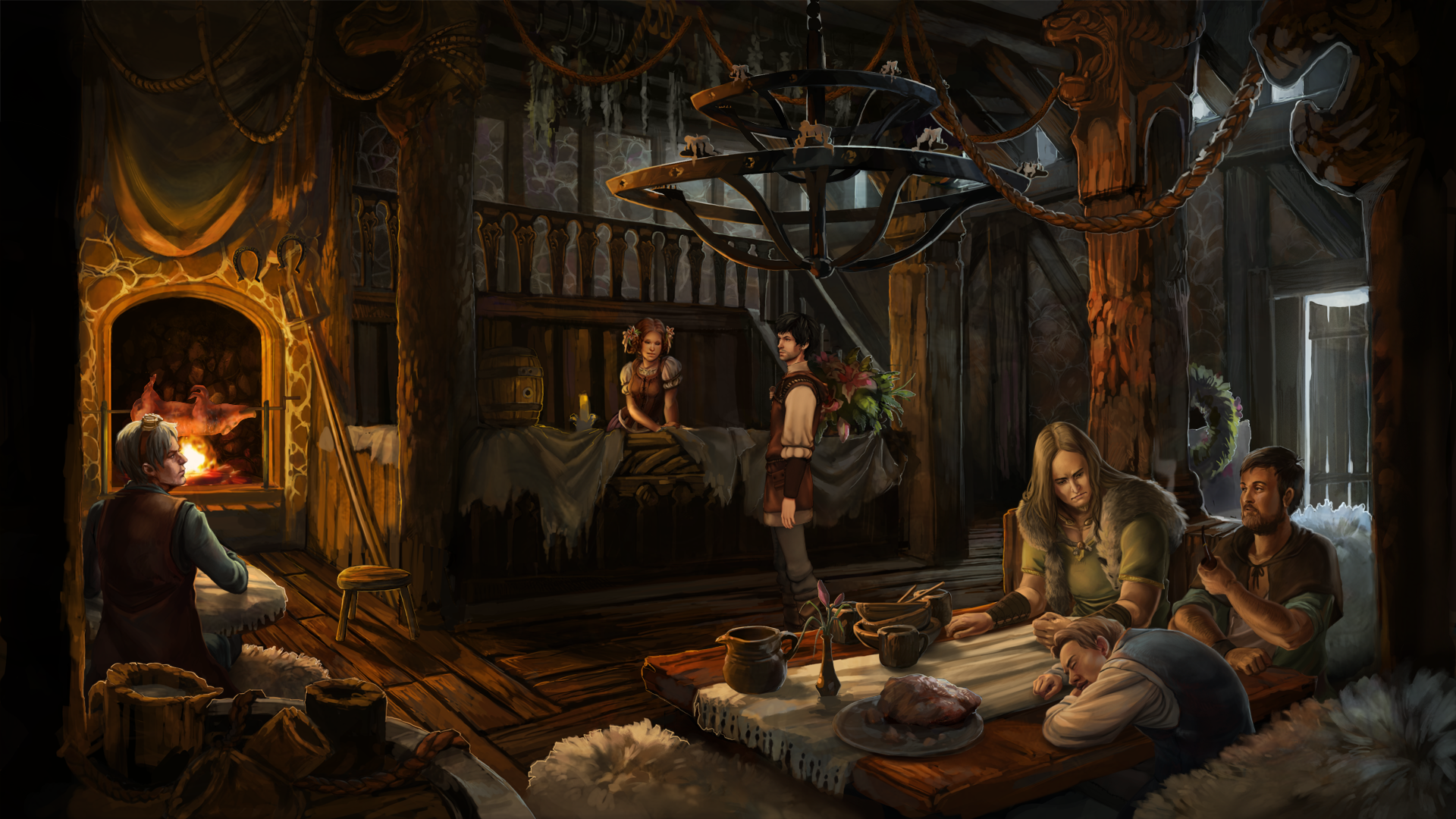 “Somehow I don’t enjoy mindless trial and error like I used to” announces Geron during what I now like to refer to as ‘The Cucumber Incident’, the one and only moment in Memoria where all reasoning and judgement are thrown out the window in place for random guess-work and pure luck. To say that there is only one such moment in a ten to twelve-hour game built around puzzle solving is a big credit especially for Daedalic Entertainment who, in my opinion have let such illogicality dog the progress of previous games. Indeed the puzzle solving in Memoria has to be the most enjoyable of any adventure game I’ve played to date.

This is in part to do with the difficulty of the puzzles and how this has been dealt with by the developers. The logic clicked really well with me and in my occasional moment or two of struggle there was always a helpful hinting system to hand, an aspect that has been honed to perfection for this release and allows you to pass by those potential moments of progressional frustration. It is also latterly to do with the genre and whilst I understand varying tastes, the context of the story surrounding the use of magic and being set in a mystical fantasy world filled with tales of conquest and heroism, was always going to firmly grab my attention. Interestingly the story itself is also part of a grand puzzle that you have to solve as its mysteries are slowly revealed to you.

Memoria tells the two intersecting stories of Geron and Sadja who whilst living in very different circumstances some five hundred years apart, have more in common than they first suspect. Geron, in a bid to free his girlfriend Nuri who has been transformed into a bird, has agreed to solve a riddle involving Sadja and her attempts to acquire the mask of Malakkar. This mask should have changed the course of a great war and placed Sadja in history books as a heroine for a nation. Instead she disappeared from all records and it’s up to Geron to discover what has happened. The intersecting stories deliver the adventure very well, each characters section releasing a little more information about the riddle, about the floating city of Drakonia, the mask of Malakkar, the great battle, the mysterious merchant Fahi and the demon that turns people into pillars of stone. Geron’s story builds quite nicely from his first meeting with Fahi, but its Sadja’s grand tale of heroism that is most appealing. Ultimately her quest for the mask of Malakkar and her involvement in the great war are the focal point of not just her story but of Geron’s too, meaning that you don’t really explore much of Geron’s character throughout the game. Geron also tends to briefly mention events that happened in the previous game Chains of Satinav. While these lines of dialogue are not key to understanding this story, they can be a little confusing and to get the most out of Memoria it’s probably best that you have played it’s predecessor first.

Memoria is played in a chapter by chapter basis, consisting of eight chapters. Quite what the point in these chapters are is unclear as they seem to appear at unusual times during the game. Playing through the whole game without any chapters wouldn’t be detrimental but I can understand the feeling of progress they instill and ultimately they don’t harm the gameplay either.

So, this is a game about puzzles, let’s talk about that I hear you cry. Well, puzzle solving in this, the latest of Daedalic Entertainment’s increasingly long list of adventure games, is simplistic but satisfying and almost never (see ‘The Cucumber Incident’) illogical. Even if it takes you a few attempts to solve a certain puzzle, you will almost always agree that the solution is something you should have thought of rather than something you could have guessed through random trial and error. Different sets of abilities in the form of spells are provided for each of the main characters and so keep the puzzles changing all the time. As new spells are added, so too is another level of complexity and as you don’t use the same spells all the time you are always kept guessing as to the right path to proceed. Of all the abilities the ‘send vision’ spell is the most innovative and while at first this seems a bit vague the opportunities to use it are well presented. Memoria also makes use of mechanics common throughout other Daedalic games such as the looking-glass used to detect all the magic in a certain area, or the use of the space bar to show all the interactive points on-screen. Memoria is so close to being that brilliant adventure game I yearn for that I really, really want to give it our highest score, but unfortunately it just doesn’t quite hit my lofty expectations for a couple of reasons. The major reason being the ending of the story, where for me the game stops being great and turns to merely average. I can’t mention too much without dropping some huge spoilers however the problem for me is not with the content of the ending but instead the way this ending is delivered. It seems almost like the focus of the whole plot is passed over in the matter of a couple of minutes. It’s not elaborated on too much, the major characters don’t really have much to say about it all, and to be honest it all feels a little rushed. As the second game in the world of The Dark Eye, Memoria can now be considered part of a series and it could be that Daedalic have another game planned to lead on from this. They might have more story to reveal and have purposely left some loose ends to lead into the next game, but in all honesty it feels like after such a brilliant middle sector, the ending has been squeezed of life.

This shouldn’t stop you from playing this game however as the many good points outweigh what could well just be my personal annoyance with the ending. The story is absorbing, exciting and mysterious. The characters are well animated, interesting and occasionally even funny. The visuals are stunning, with the beautifully hand drawn backdrops merging well with the computer animated characters that have more life than any drawn character could. The puzzles are intuitive, logical and occasionally very challenging and all in all, Memoria is a well polished, well delivered game with a decent length and an interesting story. I would go as far as saying this is Daedalic Entertainment’s best yet.

Review based on a copy provided by Daedalic Entertainment. 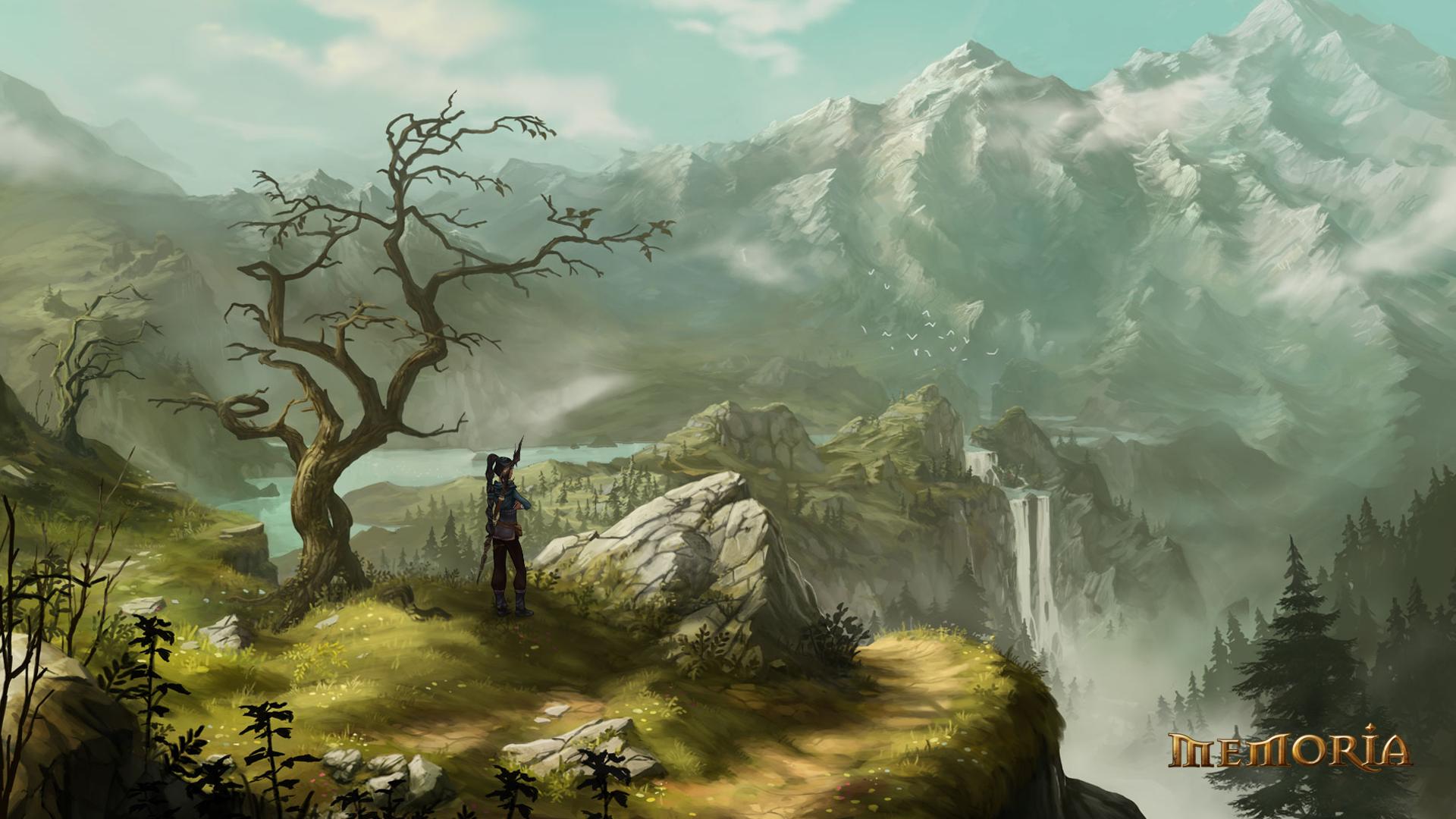 I admit that I may have jumped into the adventure gaming scene some fifteen years too late and as a result have been participating in a lot of pointing and clicking lately. It’s a wonder that my mouse hasn’t worn itself out from the constant release of great new games and discovery of old classics. As of late most of my finger tapping has been directed at Daedalic Entertainment’s releases and with each new arrival I feel duty bound to report to you with my impressions.

Memoria is Daedalic Entertainment’s latest tale of adventure and is the second game in the series to be based in the world of popular role playing game The Dark Eye. In Germany The Dark Eye really holds its weight amongst a band of loyal gamers, outselling Dungeons & Dragons with it’s dice rolling fantasy jaunts since its conception in 1984. Indeed the continent of Aventuria has been around for so long that it leads me to expect detail and complexity when considering anything linked with its name and based in its world.

Memoria tells us the story of Geron and his wish to break the curse that currently traps his friend Nuri in the form of a raven. In order to do this he strikes a deal with a wizard who will teach him the spell he requires, but only if he can first solve a riddle. This riddle tells a second story of Princess Sadja and her attempts to acquire the mask of Malakkar, a powerful artifact that will supposedly change the course of a great battle her people are engaged in. In historical tales Princess Sadja disappears from the face of the earth with no trace or explanation as to where she might have gone. It’s up to Geron to discover her fate and in turn solve the riddle and free Nuri from her curse.

Having not yet played the first game in the series Chains of Satinav, I am lacking a bit of background information of protagonist Geron and his past exploits that have him branded as the hero of Andergast. In fact quite a few of the characters themselves don’t seem to be all that well explained, possibly due to the developers assumption that I have played the previous game and already have knowledge about them. In contrast, the fresh story of Princes Sadja and her band of would be heroes is very interesting and contains plenty of information about its characters. Hers is also a story more focussed on mythical beings, magic and undiscovered ruins, adventure and conquest and I find myself longing for each new part of the princesses story as the game progresses. As this is only a demo I still expect a lot more from Geron in the full game and am sure this will be the case. If there’s one thing that continually shines throughout Daedalic’s games it’s the intricately hand drawn backdrops that stand out and give the games much of their charm and distinction. It’s the same case for Memoria and the developers have even chosen to go one step further and have rendered the characters with a computer, breathing new life and movement into the 2D world of Aventuria. At this stage in development English voice actors have not yet been added to these characters, but I’m happy to say that the script kept me thoroughly engaged to the point where I would have happily played the whole game without them.

If there’s one gripe I have at this stage it’s that the puzzles are a touch on the easy side and lack a little depth. Sure the developers have done a good job so far of removing much of the illogical decision making that has dogged past games, but in doing so have made the road to solving the puzzles a little too simplistic. It feels as if they need to add something to beef them up a little. Of course this being only a preview version I fully expect things to have changed come full release or at least advanced in the later parts of the game. There are also a few missed elements such as the previously mentioned voice actors and dialogue options that don’t exist.

All in all, Memoria is shaping up to be a great addition to the adventure gaming scene, with a strong story and a well imagined world. Before the full game releases on 30th of August I fully intend to play through Chains of Satinav so that I can better understand the characters and story of this game. Until then I recommend you check out the official web page and forum for up to date info on the series.