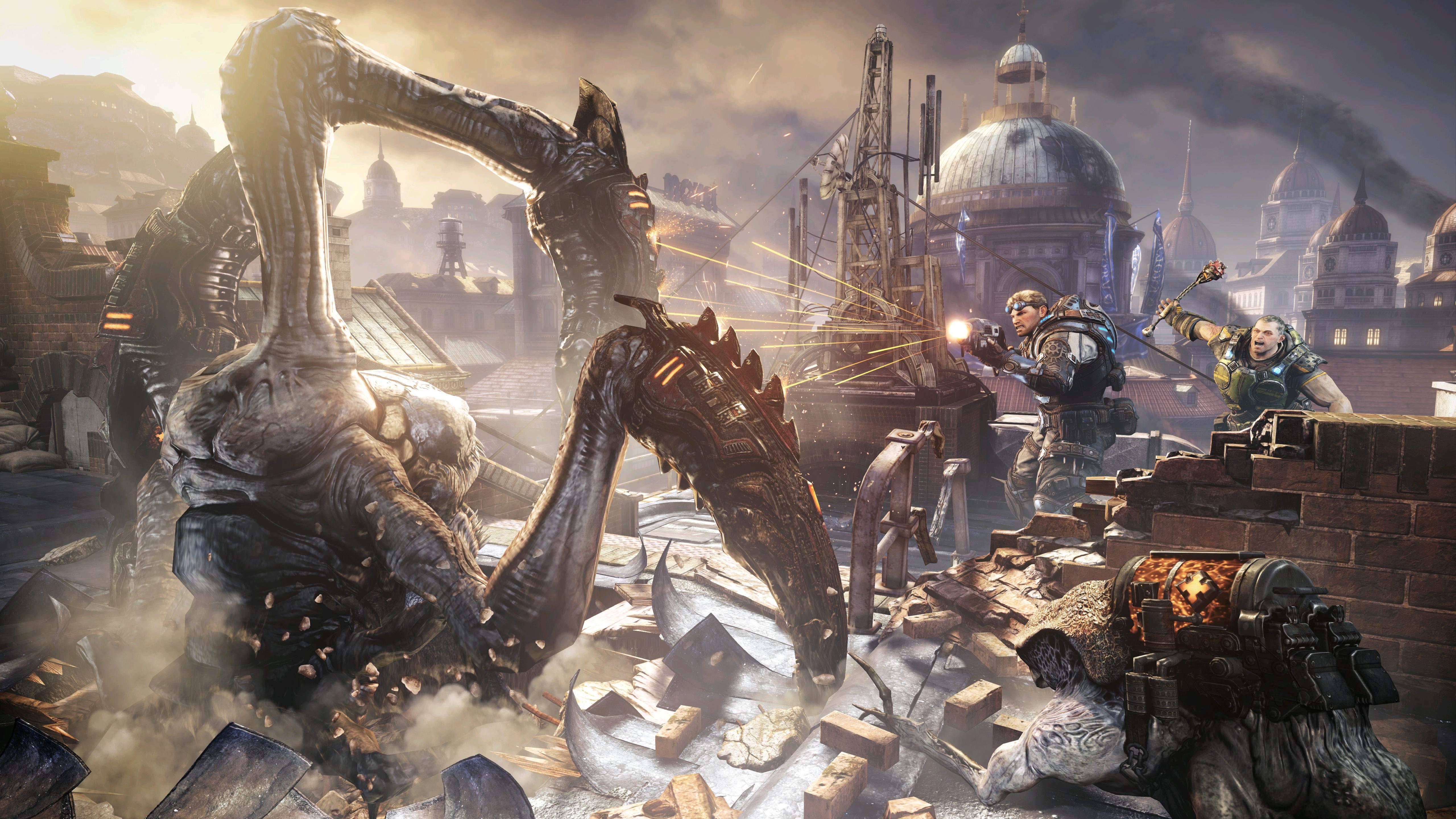 Today I will face judgement by the hands of my own people, in the court of my peers. My choice was not an easy one but I could not stand to see innocent people die while I stood quietly waiting for orders. Charged with the unlawful attainment and use of military equipment in order to save the lives of thousands of civilians, any future I once had now looks bleak. My name is Lt. Damon Baird and I have no regrets.

Set years before the original game, Gears of War: Judgement takes the player back to the immediate aftermath of Emergence Day and the appearance of the Locust Horde. Baird and the rest of Kilo Squad take it upon themselves to rescue the civilians and soldiers bunkered down in the city of Halvo Bay no matter the cost to themselves. The story is recalled in the form of flashbacks, with each member of Kilo Squad giving their recount of the happenings leading up to the very moment they were arrested. As a nice touch for the campaign, each of the four members of Kilo Squad will be controllable during their seperate accounts of the mission.

Having not played a Gears game since the original I was very interested in this new release, produced by new owners of the franchise People Can Fly. The story starts out well with the use of flashbacks proving a strong choice with which to deliver. The much improved audio and graphics look simply stunning and provide a great backdrop for the duration of the campaign. Controls are very easy to use and remember and even the well known clunky movement of previous games doesn’t feel as hindering as it once did. From what I remember of the environments in first game they were very dark and often very cramped but the atmosphere is almost entirely the opposite in this case. Sunlit areas with shimmering water, pristine buildings and highly detailed backgrounds are common place. This doesn’t detract from the particular action delivered here as often the tension comes from the fast pace rather than the eerie surroundings. The action starts off as it intends to continue; fast paced, frantic and very satisfying. Star ratings now appear at the end of each section informing you of how well you performed and giving multipliers for the usual things like headshots, multikills and ribbons for pulling off special requirements. Declassified missions are also present in each section, allowing you to up the challenge in various ways, enabling you to boost your end of level score even higher. These difficulty increases include things like impaired vision, only being able to use certain weapons, no regenerating health and reduced ammo.

Unfortunately People Can Fly seem to have pushed the focus towards this new point system a little too much. After the 20th, 30th and 40th appearance of an end of chapter summary it’s clear that these star ratings show up far too often. This in turn becomes a hindrance to the continuity of the game, breaking up the flow of the story and making each section seem more like a mini challenge rather than the continuation of the campaign.

From here things don’t get better as the story becomes diluted with each new flashback and variety in the gameplay is really lacking. While the action may be intense and fast paced it simply consists of run, shoot and repeat, which is unfortunate when the running animation literally makes me feel sick with its giddy motions. Even the optional declassified missions don’t add much in the way of intelligent or varied gameplay. One of the best examples of an added objective sees me protecting a suit of ancient armour for reasons I’ve entirely forgotten. Barbed wire and turrets line the corridors leading up to the armour, but in the end it’s still the same formula.

GoW: Judgement has however solved the problem of past games where simply hiding in cover is an easy option to success. Enemies will flank, they will push and they will force you out meaning that always being on the move is now your best option. There is also a new enemy spawning system meaning that if you have to retry a section it won’t ever feel exactly the same. This does however lead to the combat seeming a bit random at times and often advancing past a tricky situation can feel like luck. After playing through the campaign and collecting 80 performance stars, Aftermath is available as an unlockable epilogue of sorts that adds more to the story of Gears of War 3 and its characters. This short section adds around an hour or so of game time and shows glimpses of more intelligent but claustrophobic gameplay, akin to the style found in previous games. It’s just a shame there isn’t more of this in the main campaign.

As is the way in many other games, the singlpeyer campaign of GoW: Judgement acts as a warm up for what’s to come in the multiplayer. Frantic and intense action are still prevalent here but with the added difficulty of playing against other people meaning that tactics and teamwork come to the fore and are required in order to succeed. New game mode Overrun is a perfect example of this, with one team taking control of COG members and the other controlling Locust. It is the job of the Locust team to attack three objectives in succession, breaking through barbed wire barriers and using the different classes to their advantage in order to win. The COG team must defend at all costs with a timer counting down until the hammer of dawn is activated and the Locust are destroyed.

With the campaign clocking in at 5-10 hours depending on difficulty, multiplayer brings in plenty of fresh life to the game. In addition to Overrun there are also Team Deathmatch, Free For All and Domination modes meaning variety in gameplay here is a little more apparent. While in the campaign the gameplay seemed repetitive and simplistic, here it blossoms and becomes very addictive and enjoyable, especially when playing as Locust in Overrun. Tactics, teamwork and class knowledge are needed and simply shooting is not your only option. For example my favourite class the Engineer can spawn a turret to draw fire from the enemies while he switches to his secondary weapon, the repair torch and reconstructs fortifications vital to keeping out Locust. Surprisingly microtransactions are present in the form of character and weapon skins, all available from day one in an almost identical manner to the frowned upon ones found in Dead Space 3. It’s a wonder that no one picked up on this and constructed a few bad news headlines, it also makes me wonder if EA published games are simply picked on too much and that things like day one DLC and microtransactions are much more widespread than we already know.

In conclusion, if you’re a Gears fan and your looking for fast paced, frantic and at times challenging combat then this is most likely your kind of game. It may be simplistic in nature but it’s satisfying and the multiplayer will add hours of extra life, with DLC planned for release very soon. If you’re new to the Gears franchise and you’re looking for intelligent combat, well thought out characters and a decent story to dig into then this is most definitely not for you.

Gears of War: Judgement does just enough to make me wonder just what I have been missing in the previous couple of games, but by itself is nothing spectacular. Plenty of replay value will come (for those who want it) from the enjoyable multiplayer and beating high scores set in the campaign by you and your friends.

Review based on a copy provided by Microsoft Studios. 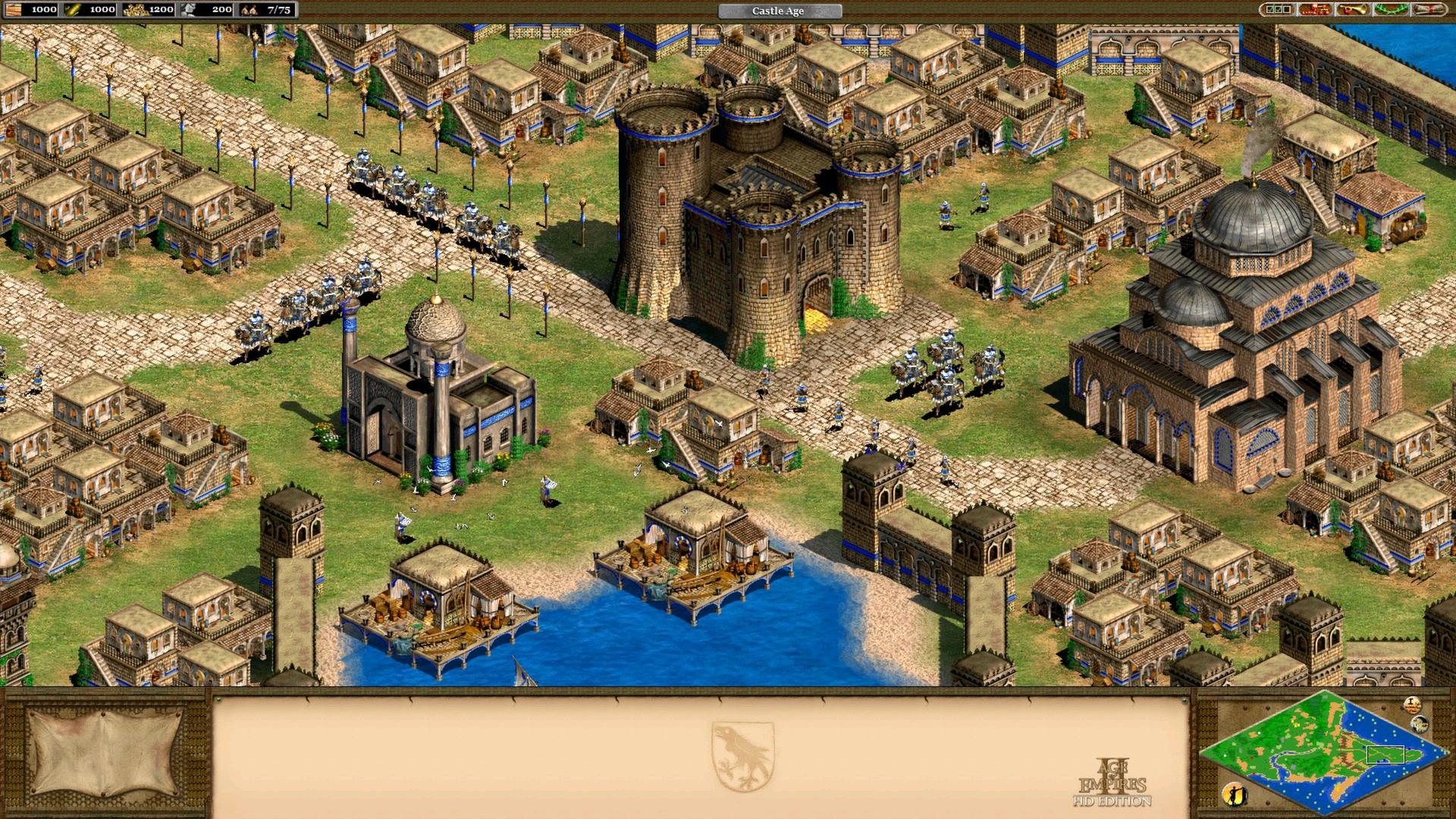 Remember Age of Empires 2? It’s only the game that first introduced me and countless others to the RTS genre and defined the first few years of my PC gaming life. Well it’s back and will be exclusively available on Steam in its updated HD format.

Complete with the Conquerors expansion pack, Age of Empires II HD will bring some other new features to the reboot aside from some lush new graphics. These include; multi-monitor enabled gameplay, Steam Workshop support and new multiplayer options. It will available to play from April 5th for anyone who pre-orders the game and from April 9th for everyone else. Currently pre-orders are discounted 10% at £13.49.

Personally I can’t wait for this release as my old copy (yes I still have the original stored in the attic) isn’t compatible with my current PC.