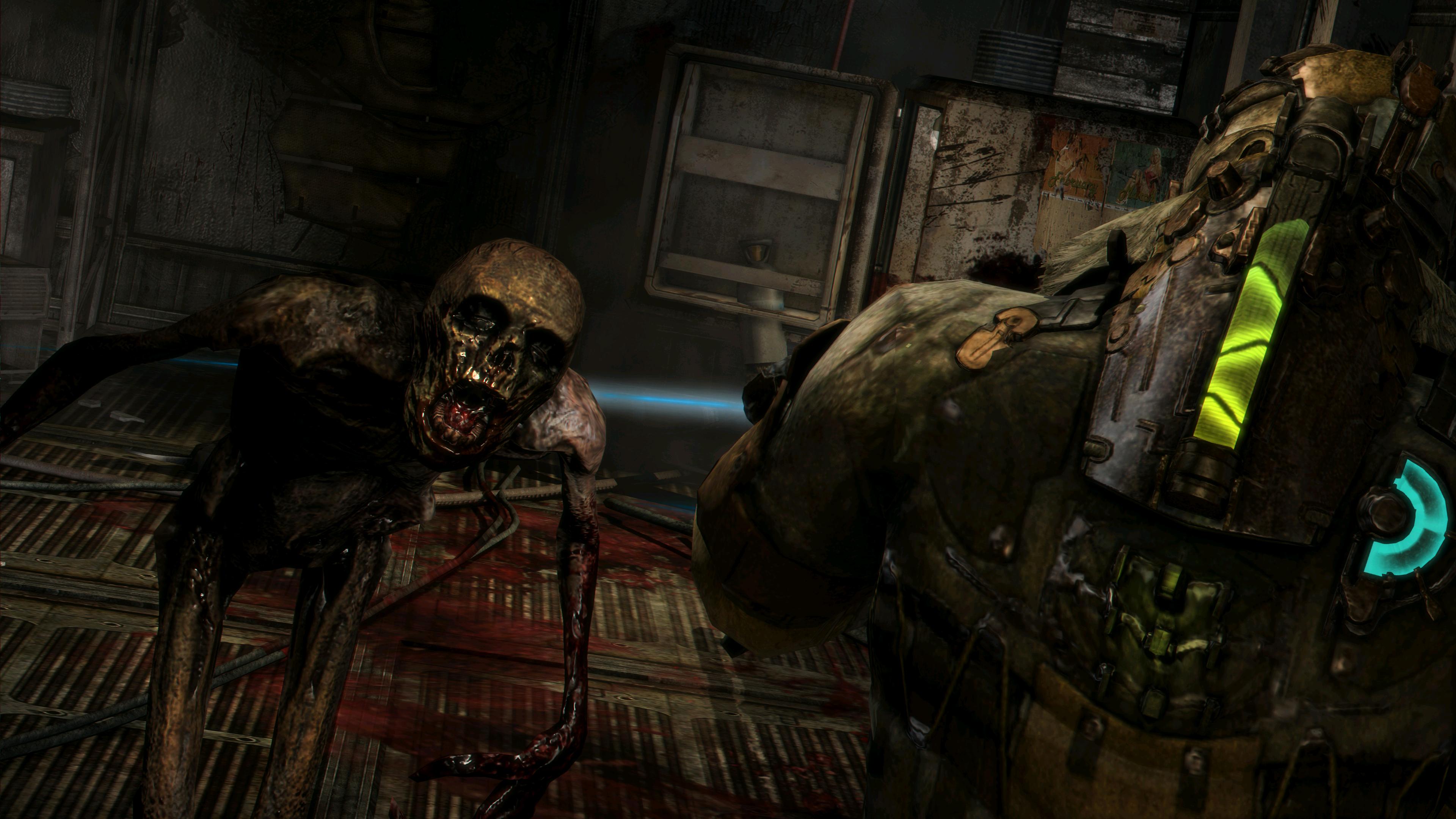 Someone once said that in space no one can hear you scream. It is possible however, to hear the shriek of your mum as she discovers just how much you’ve spent on microtransactions. At the very least your scrapbot will have its own personality now, which is more than most people can claim.

I feel strange for saying this about a game known for its survival horror background but Dead Space 3 is a lot of fun, especially during the intense and largely scripted moments that almost act as boss battles. But is fun really what I wanted and expected from the third installment in the series? Well no, not really. Dead Space 3‘s opening scenes cut a distinctly different atmosphere than that of its predecessors. Instead of dark, blood covered corridors and cramped conditions you traverse through the steam punk style streets of Earth, decapitating Unitologists and ducking for cover behind objects in the street. The last thing we need is another cover based, third person shooter and followers of the series might well be getting worried at this early stage in the game.

So has Dead Space 3 become an action game? Not entirely. Yes, there are action elements in the game that weren’t there previously. Things like the cover system, customisable weapons and wide open spaces for beasts of a gigantic nature all influence the direction this adventure in the series has taken. But at its heart Dead Space 3 is still the same survival horror game, just with a little polish added to keep things from getting stale and repetitive. The amount of production that has been poured into the fine details of the game has gone a long way to making sure that this is the case. The eerie lighting effects, deafening audio and brilliant voice acting all add to the sense of tension and dread that die-hard fans of the series will be craving.

Thankfully (for some) Isaac’s Earthly adventures are fairly short-lived, and It’s not long before he finds himself whisked away into a dark corner of the universe in search of marker technology. It’s at this stage that you progress into the familiar gameplay of creeping around corners and closely watching every vent you pass for explosive necromorph appearances. It’s also at this stage that I began to notice the effect the difficulty setting I chose was having on my experience.

Having not played a Dead Space game before, I opted to go with normal difficulty hoping that it would provide somewhat of a challenge but nothing too strenuous. While the enemies of normal difficulty still provide a challenge for a relative beginner, the fact that every single one drops a health pack, ammo or an item that can be sold takes away from the survival portion of the game. While getting used to the tactics of how to properly deal with each enemy can take a bit of time, being stocked up on twenty health packs means survival is not a problem in the slightest. This in turn seems to make the dark corridors a little less ominous and the waves of enemies a little less formidable. For anyone who has experience with shooters or past Dead Space games, I recommend a harder difficulty if you want to keep a true sense of fear and foreboding in your playthrough.

Aside from the obvious graphical update and the addition of more action styled elements in the gameplay, Dead Space 3 has undergone a number of major changes. Most notable are the changes to the weapons and inventory systems and enemy drops, which have become more complex than previously. Where before enemies used to drop credits with which you could buy upgrades and weapons, they now drop a variety of materials and everything you need can be crafted at a workbench. The sheer number of weapons craftable from these materials seems almost endless. From double grenade launchers, to plasma pistols with acid spewing attachments, to a shotgun and assault rifle combo. Providing you scavenge for the correct materials, the choice is yours to make and trying out different mixtures of weapons and picking your favourite is half the fun of the early stages of the game.

Another major addition in Dead Space 3 is the ability to play the campaign with a friend. Co-op may seem like another strange addition for a game meant to send a chill down your spine, but generally it has been handled quite well. If you want, you can drop in on your friends game, or vice versa and begin the exclusive co-op missions, taking the place of Carver as you discover more about his dark past. These missions along with the optional side missions in the single player, uncover some of the more interesting fragments of the back story, like how others in the areas you travel met their demise at the hands of necromorphs and worse.

They also uncover stashes of materials, upgrade circuits and weapon blueprints that will make a huge difference in the higher difficulties. The only disappointment is, that without a co-op partner you are unable to explore the story of John Carver and his character becomes very bit-part in the main plot alone. He shows face rarely and while his comments and actions feel like they should have meaning and understanding behind them, instead they often end up making little sense.

Finishing off any story arc, let alone that of a trilogy of games with a strong following, is a hard task. I think it’s fair to say that however you do it there will always be someone who is unhappy in certain respects and for me there was one main problem. The ending of Dead Space 3 seemed somewhat underwhelming, the big reveal in the story didn’t seem all that revelational and left me feeling a little flat. Gameplay wise it was great and ended up being a little Final Fantasy end boss, which actually worked really well but might not be everyone’s cup of tea.

In conclusion, while Dead Space 3 may have introduced some action gameplay mechanics such as the open areas of Tau Volantis, or the duck and cover system, at its core it’s still as scary and gruesome as it has always been. The controversial microtransactions and DLC are unneeded and not pushed in your face, and while the storyline is not best handled it is not by any means terrible and is still a good addition to the series.

Review based on a copy supplied by EA.