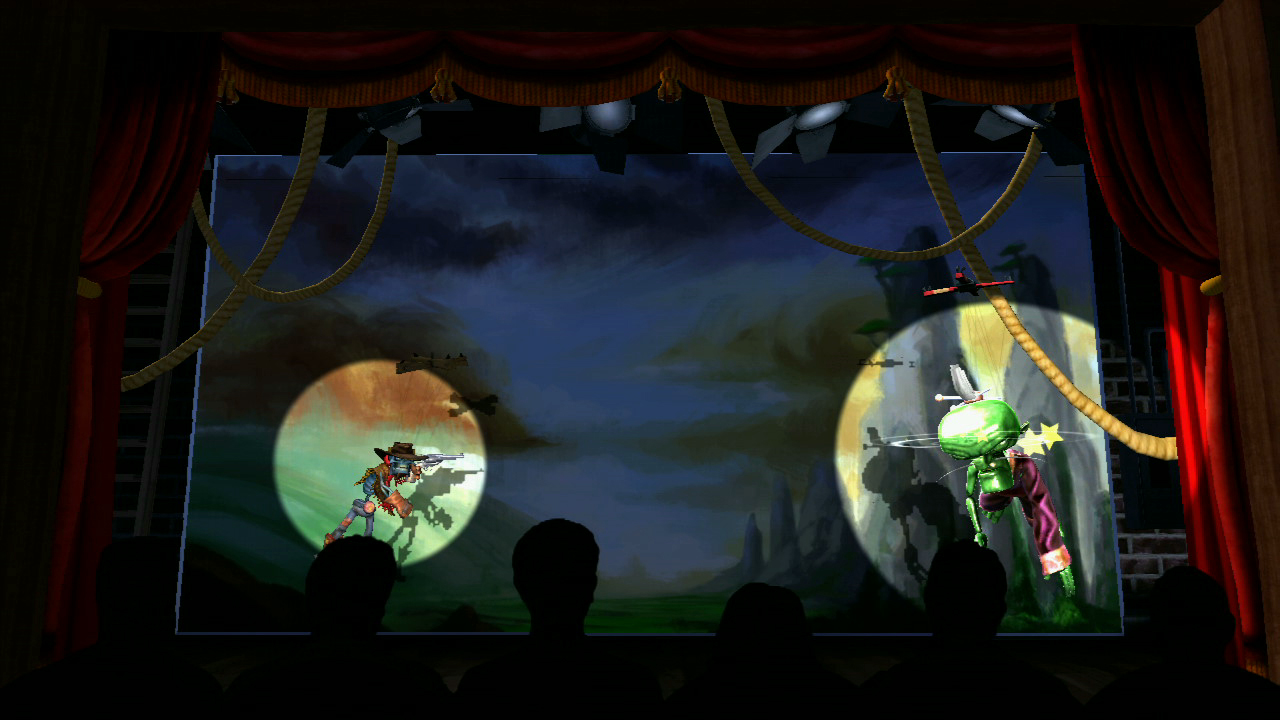 If you own a Kinect, I implore you to go out and buy The Gunstringer to experience what is truly a majestic game.

I don’t use my Kinect often due to the constraints imposed by requiring a certain amount of floor space, but The Gunstringer makes the effort of moving my Xbox into another room entirely worth it. The best bit? This is a game which makes perfect sense to be used with Kinect, it hasn’t been shoe horned in to work with the motion sensing system, it feels like Kinect was the raison d’etre for Twisted Pixel to make The Gunstringer.

The game opens with a brilliant sequence videoed in the real world which sees people walking into a theatre to watch a production of The Gunstringer, there is a large audience and you then see the backstage antics as a small huddle of people put the finishing touches to setting the start of the play with the puppet of The Gunstringer lying on the floor.

This is the context for the whole game, everything from the presentation of the game, the narration and even the controls are put into context by the theatre setting for this play about The Gunstringer.

After the awesome intro, you are taken into the game properly and the story is set up. You take control of the aforementioned Gunstringer, an undead cowboy skeleton who was betrayed by his gang of miscreants and left for dead. Revenge is on his mind, and revenge is what you will let him deal out. The hunt for revenge starts in classic wild west cowboy country as you take to the trail of Wavy Tube Man. The story is given a sense of gravitas by the role of the narrator who is your constant companion, not only does he comment on your actions in the game he talks you through how The Gunstringer was betrayed and the history he has with his intended victims. The narrator isn’t you only companion during your quest for revenge, the audience to the play while cheer you on and boo your foes and at the end of an act that will shower The Gunstringer with roses.

The Kinect controls are a delight to use, I had the occasional issue where my actions weren’t picked up or were exaggerated, but that is likely to come down to the Kinect device more than the game. Unless you activate ‘lefty mode’ you will use your left hand to move The Gunstringer or whatever he is riding from side to side and raise your hand to jump over any gaps. Your right hand in your shooting hand, you wave it accross the screen to select your targets then pull it back towards your shoulder to fire your six shooter. If you have a Kinect but are struggling to find games worth playing on it, then you really need to take a look at The Gunstringer, it really is an extremely impressive title, especially when you look at all the items you can purchase with the loot from your missions.