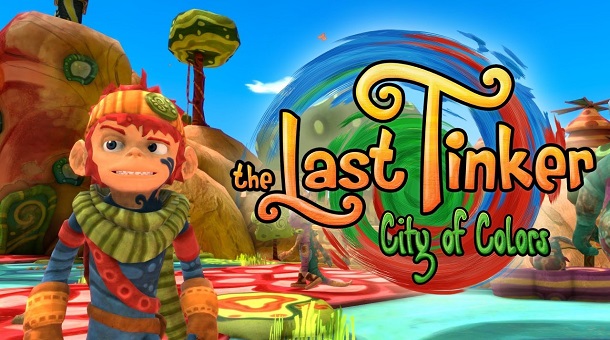 I’ve been playing a lot of The Last Tinker: City of Colours. As is often the case when you don’t get to play a title pre-release you can see a lot of other reviews pop-up and if you’re not careful they can colour your impression of a game. Almost without exception the reviews have been positive, great even in some cases. Is this the first exception….read on for my Verdict.

In City of Colours you play Koru, a monkey-like child who has a floating sheep-shaped teddy for a companion. Koru is tricked into unleashing a blight on Colourtown (though it seems that it had in part, already begun with Koru only acting as a catalyst) and then has to set about righting this wrong by collecting balls of colour to return the vitality to the world and save it’s inhabitants.

The developers are clearly making a statement here about race and cultural isolation, something which is handled very well. It’s very easy to be too on the nose with these kinds of things and I never felt that they were labouring the point. What’s more, they used it as a context for the game’s actions and driving narrative, rather than ramming it down your throat every five minutes. This IS a game aimed at children, so that may play a part, but still, there is deft skill on display here. There is a pleasant aesthetic; vibrant colours and distinct art styles make the world an interesting and vibrant place to explore. Despite this, I can’t help feeling that it looks like a title from five years ago; even the stylish art work can’t disguise the age of the engine. This is slightly frustrating given some of the stunning visual other titles manage (such as the superlative recent Rayman titles or some Mario games) with the same generational tech. However, given its target demographic this is forgivable.

One slight note though, my three year old son (admittedly probably too young for the game) was scared of Koru. He looks very different to the other characters, and, if I am being particularly harsh here, he’s not a nice looking character at that. Given the softer appearance the other characters have (including the enemies), to have something so animalistic as a main character seems a (very) slight misstep. The music has received plaudits from many other sources; it’s a folky-guitar based sound that initially at least, is quite pleasing and very different from the usual fare you get. Unfortunately, it quickly becomes highly repetitive and after a few hours WILL drive you mad. I had to turn it off as I quickly grew to loathe it. Again, this is a game aimed at children, so it might not be an entire gamebreaker.

The way the game feels and controls is good; the movement and mantling is handled well – it’s very forgiving and allows you to feel like you’re in complete control while still having the necessary guidance and help you need for a title aimed at the younger generation. It works very very well. The puzzles too are generally quite good, if not repetitive, but a solution almost always presents itself within seconds of you feeling stuck. It’s got the necessary intuitiveness that these sorts of titles need. Combat takes cues the Arkham Asylum free-flowing attack system, and manages to work well while feeling intuitive and fun.

The problem for me though is how it all comes together. There are large areas which have little to do in that you have to traverse between your quests. The puzzles are mostly long and tedious and you’ll end up repeating the same task two or three times past the point when you understood and solved it. In a few instances I had to force myself to carry on playing the game when i reached the third iteration of the same puzzle in a short space of time. It’s a very near-thing for me, but it sours the overall experience; It’s odd. In the end though City of Colours does a LOT right and only a little wrong, it’s just a shame that the bits it does get wrong can be so infuriating. That coupled with the other titles out there that do a similar job but much better mean that I can’t truly recommend it. It is not a bad game, but there are better titles out there for you to play that will do the same as this. If it’d came out five years ago, it may have provided a more unique experience, but as it stands, and despite the colourful intentions, it just looks bland next to the competition. Enjoyable, but bland.

Review based on code supplied by the developer.