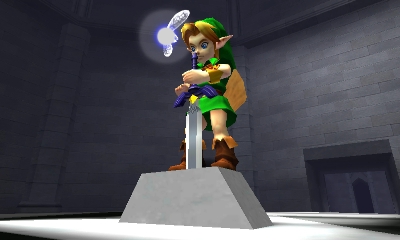 The act of remaking or remastering classic games is a double-edged sword. On one hand, it gives a new generation of gamers who weren’t old enough to enjoy these games the first time around the chance to see what all the fuss was about, while on the other hand it lets those of us who did play them the chance to wallow in nostalgia and bang on about how much better games were when we were younger. Whatever the reasoning behind a developer or publisher delving into its back catalogue, remaking these titles can also be risky, as some titles just haven’t aged well; they may look dated or cling onto outdated or archaic mechanics that just don’t stack up when compared to the standards set by today’s heavy hitters. Luckily, the 3DS reimagining of The Legend of Zelda: Ocarina of Time suffers from none of these problems.

Regarded by many gamers as the best game ever made, Ocarina of Time was easily the pinnacle of game design back in 1998 and, astonishingly, thirteen years later its’ core mechanics have barely aged. The gameplay itself remains unchanged – save for the option to aim weapons in the first person view by way of the 3DS’ gyroscope should you desire – and still offers players a pitch-perfect mix of exploration, combat and puzzle solving. Now, I’m not going to go into specifics and explain how everything works, because chances are you’ve played at least one Zelda game before – and if you haven’t and do require some education, there’s always wikipedia – so I’m going to concentrate on what’s changed in Ocarina of Time 3D. The first thing you’ll notice is how much better everything looks. Character models are still slightly blocky in some isolated instances, but for the most part have been improved upon substantially since the game’s N64 days and seem to convey expressions and emotion far better now. The environments have seen even greater leaps in quality; the more enclosed outdoor environments are no longer sealed in by angular, ugly walls with flat trees or a rock texture slapped on them but are instead bordered by natural looking rock formations or more realistic trees paired with a slight fogging effect.

The updated visuals mean the player is now presented with a more convincing world and the still stellar soundtrack suits the mood of each area perfectly, whether it be the quaint homeliness of Kakariko Village, the bustling Castle Market or journeying into the unknown in any of the game’s many dungeons, with co-developers Nintendo and Grezzo having made some slight alterations to the latter in order to streamline the experience somewhat. Most notably, the three areas within the Water Temple in which the player can alter the water level are now easily found due to colour coded lines on the walls. It might sound like Nintendo have over-simplified things, but what it does is merely provide a reference point in the same vein as the in-game maps and personally I found that it did nothing to lessen the challenge of the temple, instead taking away a lot of the irritation of not being able to remember which switch did what.

Further streamlining has been lavished upon Ocarina of Time’s user interface. Equippable items can now be mapped to both the face buttons and touch screen, allowing for four items to be easily accessed instead of three. A welcome change also comes in the form of the iron boots and hover boots, which are no longer stashed in the gear menu but can now be mapped to item buttons, resulting in the constant boot swapping in the Water and Shadow Temples no longer being a case of going through a series of menus every time you wish to do so. Navi the fairy, the ocarina, dungeon maps and your first person view are also now allocated their own areas on the touch screen, which means overall you’ll spend far less time fiddling around in menus and more time actually playing the game. Lastly, the Stone of Agony, which would cause the N64 pad to rumble whenever the player was near a secret area, has been tweaked due to the 3DS’ lack of a rumble feature; you’ll now have visual and audio cues signalling your proximity to something of interest.

All of these welcome changes are also joined by Sheika Stones which provide the player with optional subtle hints regarding where they need to go next and a Boss Mode which sees the player – provided they’ve already beaten it – battling either a boss of their choice or running a gauntlet comprised of every boss in the game. And rounding off things is the inclusion of the Master Quest version of the game which is available upon completion; a mirrored Hyrule and vastly re-jigged dungeons giving expert players an extra challenge. Considering the game’s main quest is around twenty hours long and the side quests – which offer players the chance to go for useful health, magic and item upgrades – nudge the total playtime up to thirty hours, these extra modes mean Ocarina of Time is excellent value for money. The Legend of Zelda: Ocarina of Time 3D is truly a lesson in how to remaster a beloved game. Nintendo has wisely left what worked well and truly alone and rather focussed its efforts on tweaking and/or streamlining things that didn’t work and making the most out of the 3DS’ capabilities. If you’ve played Ocarina of Time before, the 3D version offers a wealth of new content on top of the chance to enjoy one of gaming’s true gems all over again. And if you’ve never played Ocarina of Time before? Well, this is well and truly the definitive version of the game and reason enough to own a 3DS all by itself.