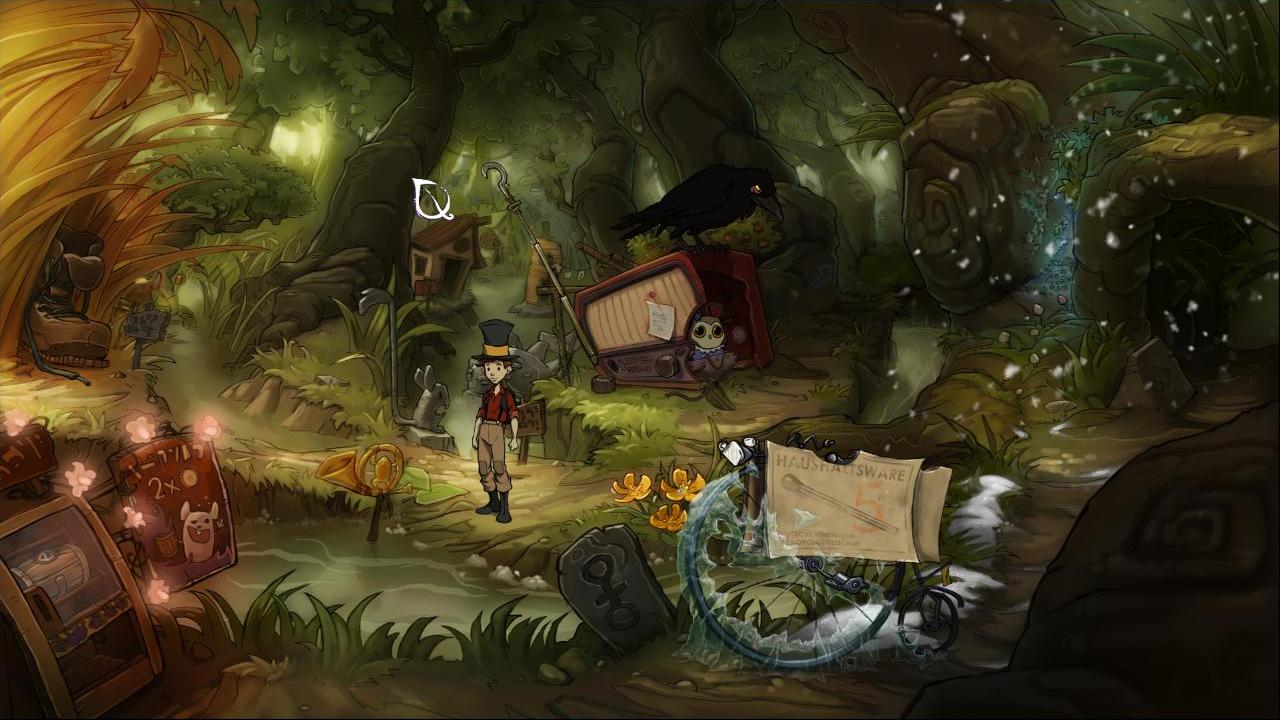 I have to admit that I’m a sucker for a game with a good story, and it’s clear from the get go that The Night of the Rabbit is a game with a good story. From the orchestral music to the intricately hand drawn world, from the solid voice acting performances to the care and attention that has been given to the delivery of the story and its characters. All of these elements create a believable and engaging world that brings me back to my childhood and the excitement and enthusiasm I had for hearing stories of adventure and discovery.

To compare The Night of the Rabbit to any of Daedalic’s previous games would be a disservice to the company as this is clearly a different game with a different message to put across to the player. This particular story tells the tale of every child who grew up with an imagination and a dream of one day doing something amazing with their lives. This story tells the tale of Jeremiah Hazelnut, the boy who dreamt of one day becoming a magician. Little did Jerry know that his dream was not as improbable as first imagined and the journey that he takes in order get there is set in motion by a chance encounter with a rabbit pulled from a hat.

The mechanics and gameplay are much the same as you would expect from any adventure game, a few unique additions in the form of spells and magical items do keep the gameplay fresh however. Along the way Jerry can learn spells that let him turn night into day (or vice versa), see invisible leprechauns or even converse with rocks leading to much hilarity and an inventory rammed with miscellaneous items. The humour is gentle and amusing, appearing often enough to keep you smiling but not so often that you get tired of its tone and direction. This fits very well with the type of story The Night of the Rabbit is trying to portray, not distracting the player too much from its main points but often giving you a line of dialogue to chuckle over. From the initial scenes of Jerry waking up to discover he still has two days of summer holiday left to the exploration of Mousewood, The Night of the Rabbit really performs well at keeping me engaged in the story. The unravelling mysteries of the forest keep me second guessing the direction of the story and how to progress with the game. Who are the mysterious foxes and lizards seen in Mousewood? Will I ever get to meet the Great Zaroff? And just what exactly is blue juice made from? The Night of the Rabbit is not without its flaws of course and with so many directions in which to venture the pacing of the game does suffer somewhat after the first visit to the town of Mousewood. It’s almost as if the games has its own Inception of puzzles, within puzzles, within… you get the idea.

On occasion one of these puzzles can prove illogical to the point that it slows the gameplay down to a crawl, halting progression and negating from the pleasant atmosphere of the gameplay. There is also an annoying oversight where the in-game journal does not record the information you would expect it to. On one or two occasions this meant I had to cycle thorough a whole riddle multiple times in order to dissect the meaning of each individual part. This on its own would not be such a major problem, but coupled with the before mentioned logical mind-boggling and you can find yourself going round in circles and resorting to trial and error in order to advance in the game. While I would say that The Night of the Rabbit is clearly aimed at a younger audience, there is plenty here for gamers of all ages to enjoy such as the challenging puzzles and enjoyable world and characters. The game often hints at popular culture giving references to characters like Harry Potter and Mario and the general nostalgic feel of games like Monkey Island will keep 2D adventure veterans thoroughly content. With a play length of 9-11 hours there is plenty of game for your money. On top of the main story there are also collectibles, achievements and a card game that can extend the life of the game beyond even that.

It’s a rare thing that a game delivers such a warm sense of nostalgia and with The Night of the Rabbit being as detailed and well presented as it is, it’s easy to overlook its minor flaws. Even personal irritants such as characters talking over each other and the flawed hinting system seemed insignificant as soon as I entered another beautifully hand drawn area or met another of the games charming characters.

Review based on a copy provided by Daedalic Entertainment.