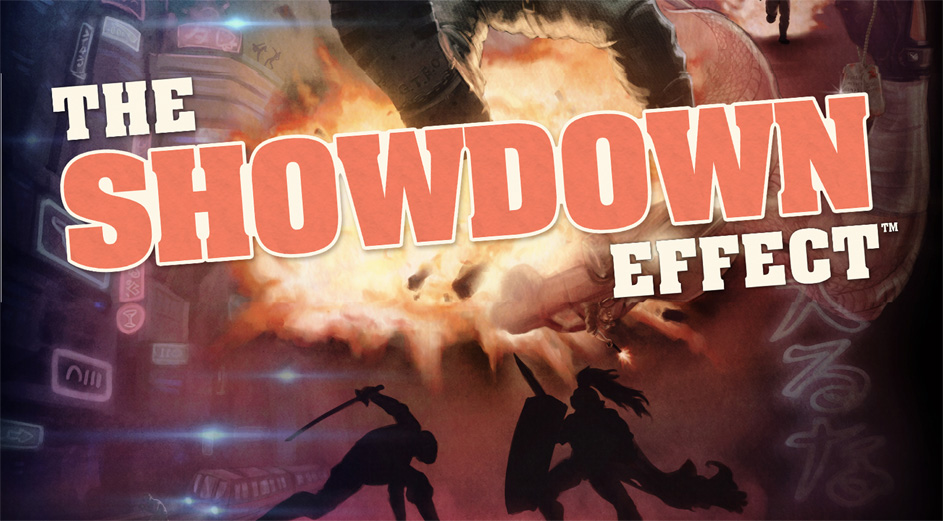 Bang. Thwack. Shot then cut in half by a thrown sword.

Thump. Someone just slapped me with what appears to be a broom. Hey wait… aren’t you supposed to be on my team? Welcome to The Showdown Effect Beta.

Part competitive 2D beat-em-up, part team-based shooter, and sporting more puns, butch one-liners and dodgy vests than a Stallone VS Schwarzenegger jello-shot-tournament taking place on a burning plane. It’s quite literally that nuts. Certain parallels could possible be drawn to Super Smash Brothers, but I get the feeling Mario, Pikachu and co. would prefer not to be drawn into the chaos.

And chaos reigns on your screen from the moment you join a server. Played out in a 2D-movement-but-3D-looking side-scrolling fashion, it will be immediately familiar to anyone who remembers Soldat – move with the keys, aim/fire with the mouse. The lack of jet-boots actually messed up my muscle-memory a few times, as it feels pleasantly close while moving around. Then you try shoot someone and miss, and die horribly.

Unlike Soldat, guns do not simply fire through line-of-sight. Rather, if you aren’t actually aiming your cross-hair at someone, your bullets will miss. This was probably the biggest obstacle I had to overcome as it feels unwieldy and rather silly in the early stages. Doubly so as you start equipped with a massive machine gun that spews bullets like angry bees at an incredible rate. Once you settle in to it, it actually makes perfect sense –

You are a born-again ninja.

You jump, dodge, slide and generally parkour yourself around with the easy grace of the lady from Mirrors Edge, all the while firing a hail of bullets as you go without so much as recoil to spoil your evening. Dodging bullets not only becomes an achievable approach to combat, but actively encouraged. And then you die again, this time with a throwing-knife sticking out of your head.

Throwing knives are for chumps though. Maps are sparkling with various items with which to deal death in a variety of imaginative ways.  A personal favourite finishing move is to shoot an opponent, then finish off by throwing my gun at their faces. It hardly ever works, but when it does… it gets me killed shortly after due to excessive giggling. Of course you can be more sensible and pick up any number of melee items – brushes, swords, candle-sticks etc. and swing/throw them with impunity. Eventually you can unlock various other items to customize your characters with too, the throwing knifes seem to be one of these as I have yet to obtain them. Well, other than finding them sticking from my characters various body-parts, of course.

But never mind, as death comes fast and loose in The Showdown Effect. Occasionally through team-killing (as of this moment, friendly-fire is most assuredly “On” on every game I played), which can be irritating. Although I will say it can be very difficult to work out who’s who during a frantic fire-fight/sword-fight/brush-war/candle-duel, with you often having you rely on the colour of the persons name to identify whether or not you should be hitting them. This can throw up a somewhat serious issue for those of us who struggle with colour-blindness thanks to red VS blue being the only options for team-colours at the moment.

I’m not colour blind, but I have found myself struggling at times. It’s a very visually noisy game. It looks superb, the characters drawing in action-heroes and villains for fashion-inspiration and the levels themselves are beautifully lit and detailed. But when you have half-a-dozen players duking it out in a confined space, it can often get overwhelming and team-killing is rife in these situations, more often than not accidental, but irritating none-the-less. Add the colour-blindness issues into this, and it can (rarely) be almost unplayable.

But for a beta, everything feels sharp. No major bugs or crashes to report. About the only issue I can throw out there is the noticeable lack of players in the evenings, making it very difficult to get a ranked game going. But as it’s currently a closed beta that’s understandable. The action is intense, daft as a brush and pleasingly more-ish. With a bit of luck, a colour-blind mode will be on the cards at some point in the future, and with some more characters and maps – this may be one worth watching out for.

The Showdown Effect from Paradox Interactive is due on PC in Q1 2013.